With temperatures forecast to hit almost 30 we decided to head high! The cable car at Fuente De is only 25 minutes further up the valley, and gives access to the upper reaches of the Picos in only 4 painless minutes – not bad for almost 1000m.

We were a bit late for the first cable car, and ended up with a half hour wait – a costly mistake as it turned out. Top tip – get there well before services start at 10am (out of season).

Our objective was the ordinary route on the  Aguja de la Canalona  (Chimney Needle), and we despatched the 5km and 700m ascent in pretty good order, fearlessly overtaking a bus load of stick wielding French trekkers along the way. 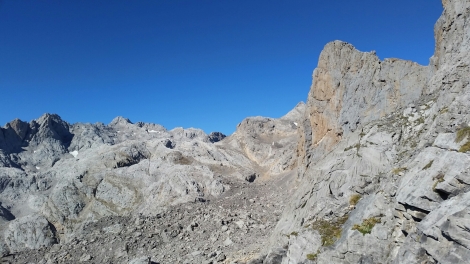 Unfortunately, as our objective hoved into sight, so did a team of four climbers ahead of us scrambling up to the foot of the route. With only a short window before the last cable car down, and limited other options, we held back to see if they would be speedy and competent – and still give us enough time to do the route after them.

We soon had our answer as a loud rumble was followed by a fusilade of rock fall from above. We managed to duck behind a boulder and watched football-sized rocks whizz past at head-height to either side of us. After several minutes we peeked out, expecting to call the rescue services for the team ahead. Instead we saw a forlorn looking climber staring down 100ft to where he’d jettisoned his rucksack. Cursing in English revealed that the hapless group were a bunch of 3 Brits with a Spanish guide. That settled it – this wasn’t a team we wanted to be stuck behind.

With time now too tight to pick another route we went for Plan B and a hike up Pena Vieja, the highest peak on this side of the Picos, and were rewarded with spectacular views.

Any doubts as to our good mountaineering judgement were dispelled as we sat at a bar at the bottom of the cable car and spotted the Brits, who must have just made the last cable car down – we’d have been stuck with another couple of hours walk.

Any disappointment had long since been drowned by a bottle of the local sidra – a strong and quite bitter cider which is poured from height  from a Heath Robinson contraption with a hand pump.