We left El Chorro to steaming tents and a rainbow, as a sunny interval blasted a hole through the overnight rain – definitely time to move on, but we got a lot more out of our visit than I expected. 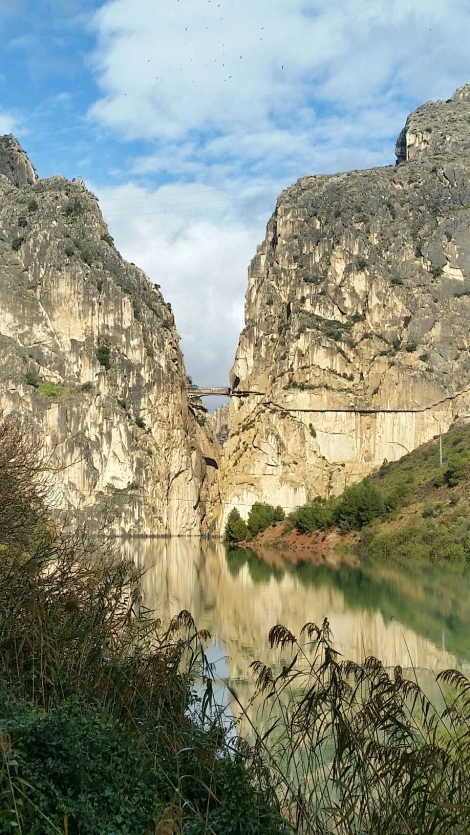 It’s a beautiful drive over the hills to the coast at Marbella, but then a depressing traips along the concrete strip development of the Costa del Sol, passing the anomaly of Gibraltar along the way.
We were heading for San Bartolo, just beyond Tarifa, the southernmost tip of the Iberian Peninsula, not really knowing what to expect. As the Med. gives way to the Atlantic the transformation is remarkable. The concrete jungle disappears and is replaced by wide open vistas to crashing waves on sandy beaches, beneath green wooded hills. It feels more like Devon than Andalucia.

The climbing is on a discontinuous ridge of partially metamorphic sandstone  (he guesses…) with a generally rough featured surface, and occasional glassy compact sections reminiscent of Arapilles. Positive flakes and shallow pockets abound, at least on the sunny and easily accessed sector Los Cernicalos.

The sunny side of this pyramid gives half a dozen routes, all around 6a and up to about 35m. The unfamiliar rock makes the first couple of routes seem a bit stiff, but once we’re tuned into the friction and trust the fragile looking flakes, the climbing is a real pleasure.

With fabulous views down to the sea and across to Morocco in the background – exciting to be this close to Africa! 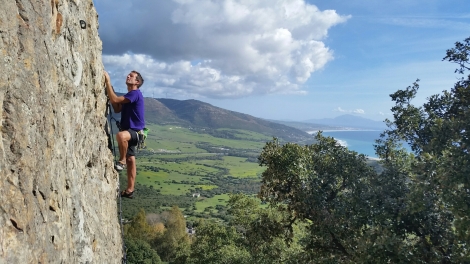