We made the most of a much improved forecast with an early start and were on the first shuttle bus at 8am. We made short work of the “1 to 1:30hrs“ guidebook approach time and were at the foot of the route in about 40mins – benefit of a little reconnaissance and no sack. We were rewarded for our efforts by being first in the queue!

… Looks like a tiny hump but it’s another 400m of climbing! The first couple of pitches are 6b/c and are given as A0 alternatives in the guidebook, which makes the whole outing pretty balanced at sustained HVS / E1. The best of the pitches follow endless layback cracks for well over a hundred metres…

… until a bit of down climbing and traversing ducks around a huge loose flake and brings you to an off width. It’s handy at this point to have a big cam (camalot 4 works) otherwise you would be looking at a 30m lob were you to slip (thanks for the advice, Jim!)

Plenty of exposure looking down to the eponymous rifugio Luna Nascente with Davide – local aspirant guide, and his mate.

Another huge pitch brings you to a 40m traverse leftwards… Probably severe, but with no gear. If that wasn’t exciting enough, the top-out is via a 40m 5b pitch with no gear whatsoever, another great place to not fall off!
Topping out in something around 5 hours, we were down in the Gatto Rosso sharing a beer with Davide and his friend by 3pm.

Back in St Martino we felt we’d earned a further beer or two in the bar KundaLuna – the name given to the combo of Il Risveglio di Kundalini plus Luna Nascente, even if we’d given ourselves a couple of days to do it. 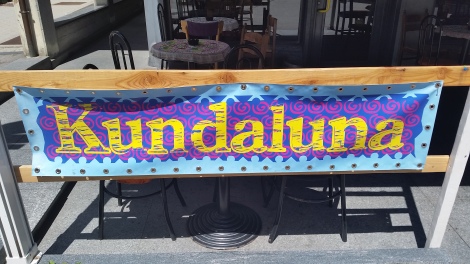 We caught up with our Hungarian friends, Zoli and Benni from the previous day, and enjoyed sharing some stories from our different climbing adventures. Good times!