Whilst it might sound like a dodgy sandwich filling, Meio Mango is actually the most happening crag in Arrabida. You park within a stone’s throw of the rather spectacular lighthouse at the Cabo Espichel

… and walk straight towards the sea, plunging somewhat improbably into the undergrowth shortly after the parking to emerge on the headland above a broad gully with a steep zigzagging path down it ending at a few steel rungs and an abseil point. Here’s a link to the trail to follow (to avoid wandering aimlessly along the cliff top like I did)

https://www.wikiloc.com/wikiloc/view.do?id=22509266 Here’s Helen rapping the last 30m or so (probably a Diff to get back out again)

The approach gets you to sector Pocas, which has half a dozen “amenable”  routes V+ to 6c, in amongst the tough stuff, and we did most of them. 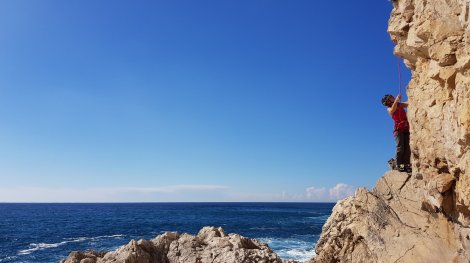 However, take the grades with a large pinch of salt – in fact pinching salt is pretty much the required technique as almost all the holds seem to be the shape of Toblerone tubes and covered with a greasy coating of saline – it’s also a great solar oven, and I was definitely doing my bit to add more salt to the holds!

There are sectors either side, cut off by narrow zawns, with thoughtfully installed zip wires to get across. With the bigger waves regularly launching a rainbow of spray over the wire, we decided to make do with the first sector!

Whilst there is a broad ledge beneath the routes, you are constantly reminded of the power of the ocean as it booms against the rocks below, and the guidebook warns of a 5m swell – it really can get seriously wet down there.

This probably won’t go down well with the locals (and might be influenced by the conditions and the fact we weren’t doing the 7s and 8s) but we weren’t completely taken with the actual climbing. The rock has a shattered look a bit reminiscent of a Peak District Quarry, and there’s a nagging doubt about which of the bolts are the new safe Titanium ones, and which are the breakable stainless ones… Anyway, definitely worth the trip just for the ambience which is truly memorable!

Climbing back up the descent route, we caught sight of a slack-liner on the wire suspended across the gully – as if the fun to be had on the crag didn’t offer enough excitement for one day. 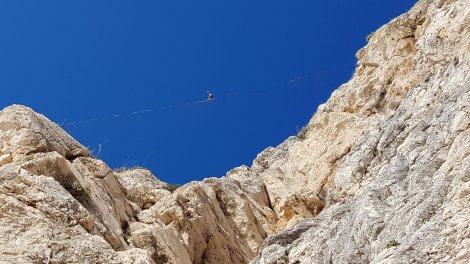 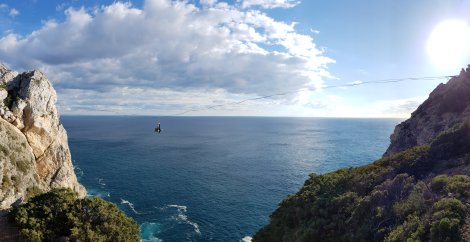 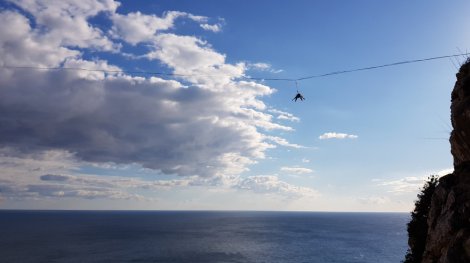