We’d been hoping to use the spring weather towards the end of our trip to explore some of the many cragging options nearer the Pyrenees. After a long wait, we seized on a forecasted 2-day “spring-like” window to head for the hills! First stop Berga – a pretty town set at about 700m at the foot of the Pyrenees, with about 500 routes scattered across numerous crags on the hillsides behind.

Sector Rock de L’Alou is the lowest, at just over 1,000m, and a complete disappointment. A very shiny grey slab of desperate looking 4s and 5s on the left side and another vertical wall of desperate looking routes around the corner to the right (at least these are 7s and 8s!) In between is a promising bit of rock with a couple of 6as one of which has a 7a extension. Qué Masda, 6a, was really polished and tough and Perestroika, 7a, had both of those qualities in spades!

We packed our sacks and braced ourselves for sector L’Estany, 400m higher. This was looking like a poor decision, as the narrow and winding (but tarmacced) forest road disappeared under 6″ of snow, but we pressed on and made it to the parking without incident.

Crossing out of the shade of the trees it was remarkably warm and we had a late lunch in t-shirts. A 5 minutes walk through pine trees brings you to the foot of the impressive crag, set above neatly manicured grassy terraces (with only the occasional large brown pat to indicate who’d cropped the grass!) What a fabulous setting for what look to be stupendous routes… 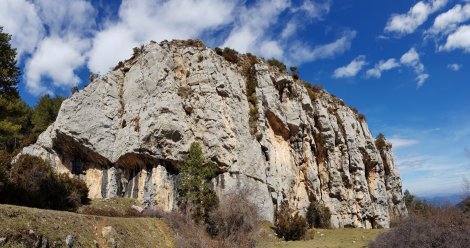 There’s a lot of steep territory here, especially getting off the ground, and we set our sights modestly with Disnylandia, 6a, about the easiest route on the crag. I stick clipped a very high first bolt and was glad to have done so as the first moves were very polished and pretty tough – in fact the bottom 30ft felt like a HVS at Ravensdale! Things relented somewhat, and the remaining 20m were much more enjoyable. I guess the polish shouldn’t have been such a surprise – despite the Alpine feel of the place, it’s really only a 5 minute walk and an hour’s drive from Barcelona. 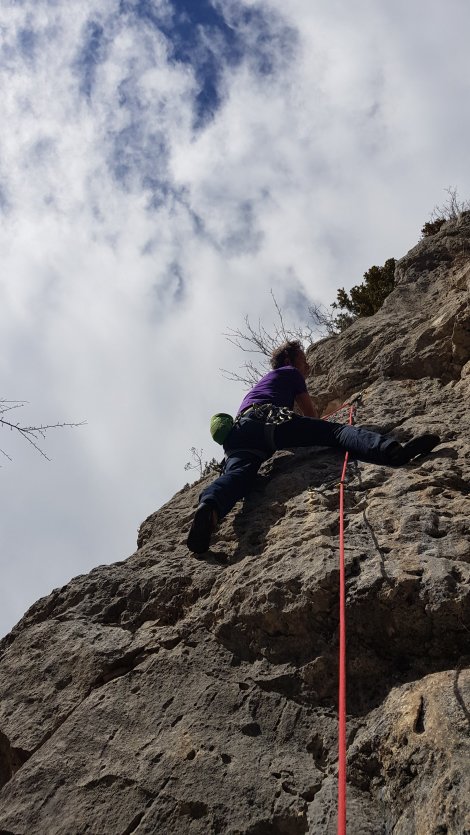 We figured it would be worth coming back for more on a future visit (there are some stunning 7as up grooves and steep walls) but that we’d use the remaining sunny day to recce Montgrony. Back through the now melting snow, we headed over the hills, but not before a short diversion past the remaining couple of crags – Sector Carboneres. These are at over 1,500m and almost roadside, and remarkably the van thermometer was reading 16C at 5.30pm as we pulled in to have a quick shufty. These looked handy and scenic rather than awesome, but worth a day sometime.

Much trawling of the web and various apps as we drove yielded scant reward in terms of campsites – mostly closed until the Easter weekend, but we stumbled across a small site at Borreda, in the middle of nowhere. Set on a steeply banked hillside on the edge of a gorge, with a stream splashing through, it was potentially idyllic but disappointingly full of static caravans on first appearance – however, we were shown to an empty spot at the bottom of the site from which all we could see were trees.

The real bonus was the little site restaurant, housed in what were presumably former stables – the 12 euro menu del dia was the bargain of the trip: 4 courses plus a full bottle of very drinkable vino tinto!

This was just the starter!