Pembroke climbing is a logistical nightmare – so much amazing climbing with so many conflicting things stopping you from doing it!

Tides – these are at least very predictable, but stop access to many routes for all but a short window either side of low tide. Here’s a handy link https://www.tide-forecast.com/locations/Pembroke-Dock/tides/latest

Bird bans – also fairly predictable though there seems to be more variation each year with more restrictions but targeting specific nesting sites. I guess this represents closer liaison between BMC Access folks and the RSPB, and is to be welcomed if it means more protection for rare birds and less disruption to climbing – the latest BMC RAD App is a real boon in keeping track of what’s in and what’s out. It even integrates tide times, weather and crag locations – good work guys! https://www.thebmc.co.uk/bmc-new-rad-access-app

Range closures – the MoD owns the land where the vast majority of the climbing is, and use it to practice shooting things and blowing things up. The accompanying cacophony of CRUMP of the tank shells and RAT-A-TAT-TAT of heavy machine guns makes for a surreal contrast with the magnificent coastal scenery (and is even more unnerving when they have night firing). Not surprisingly, they don’t like you there when it’s all kicking off, so the range is closed every week day and most evenings outside of the summer holidays. Sometimes you can’t even drive down the road to the St Govans car park. Again, this is fairly predictable but surprisingly hard to pin down on the web. Here’s a handy link https://www.gov.uk/government/publications/castlemartin-firing-notice–2

Weather – This is the joker in the pack. As well as the obvious macro conditions (ie it isn’t lashing down and it’s above 5C) there’s also a microclimate effect that affects Pembroke climbing. Early morning mist or a sea fret will both impart a dampness to the rock which will reduce its frictional properties to something resembling a bar of soap.

Take all of the above, and stir in a preference for doing 3* routes we haven’t done before, and you can see why guidebook-pondering is such a time consuming process at Pembroke (even more so than elsewhere!)

Anyway, all the above is by way of explanation as to why we ended up with a three crag day!

The range is closed for firing, it’s forecasted to be a gorgeous day following overnight rain and early mist, most of the crags are bird banned and low tide is around 10am…

We rap into Trevallen, down “The Hole” abseil line (which is allowed, even though the climbing on the adjacent lines is banned, providing you “keep quiet, so as not to disturb the nesting birds” – ironic with a WWII reenactment taking place a mile away!) 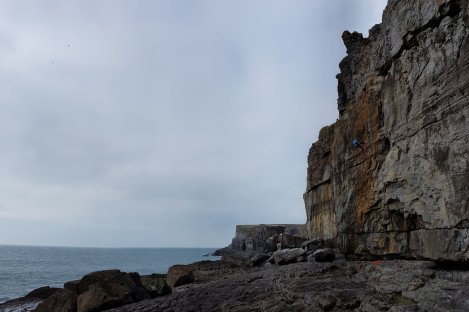 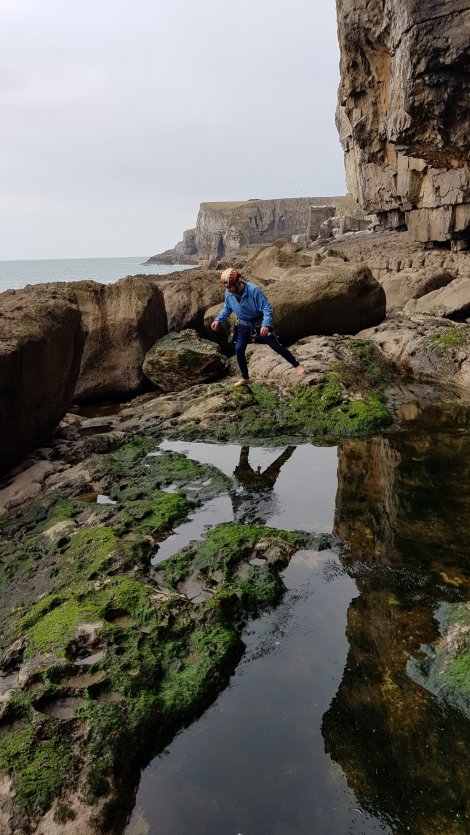 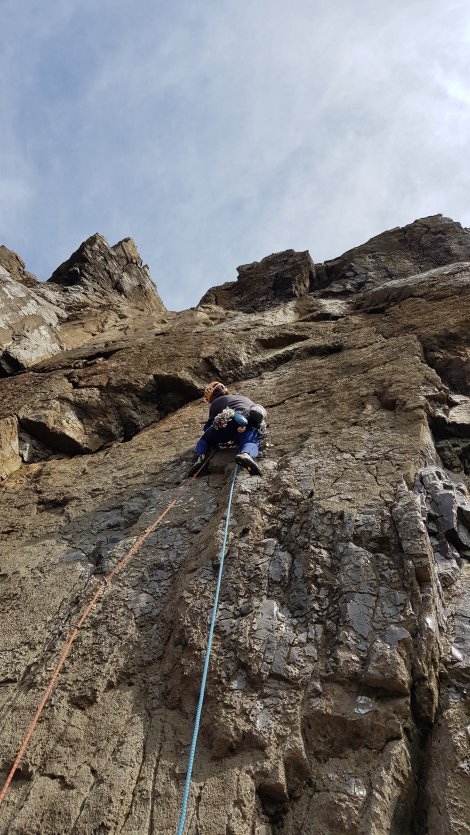 Our ambition to do A Fascist and Me gets put on hold again, as by the time it’s dried out it’ll be under water (along with much of the rest of Trevallen).

On to St Govans which ticks all of the access boxes, but therefore has little left on the “To Do” list. The sun blasts through the haze and Jake leads Clean Hands Blues Band.

One of the “winners” in the review of bird restrictions is Mowing Word, a fab piece of rock a half hour walk along the coastal from Broadhaven beach. 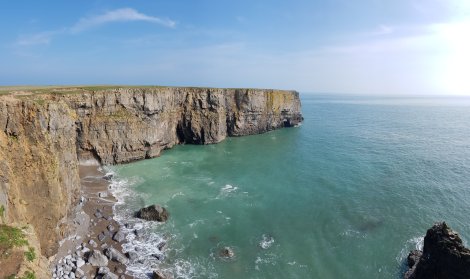 We did the mega classic Seal Hunt

… and Chimes of Freedom which takes the most obvious line up the impressive West Face. Once again, we managed to procrastinate so long that we climbed it at bang on high tide, necessitating an ab direct to a hanging stance (avoiding Diedre Sud – banned!) with toes almost in the sea – happily a placid millpond today.

Fab views of a moody sunset as the next weather system comes in, 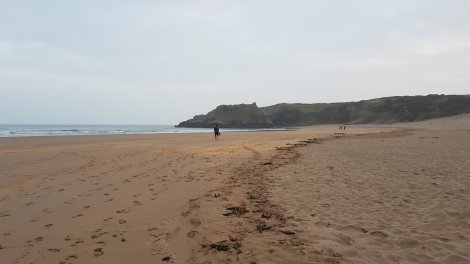