Sunday morning and I should be on a plane to Vegas. That didn’t work out (yet) but as a consolation I’m heading west along the A55, bound for Gogarth. The bird ban has ended, the forecast is dry and Stan has unearthed another Red Wall obscurity for us to throw ourselves at. The fact that it’s raining all the way until halfway across Anglesey is immaterial: it will be fine at South Stack; it always is, and anyway; I’m on my annual Red Wall pilgrimage to “the altar of steepness and looseness!”

Last of the Summer Wine seems an appropriate name, given the autumnal feel to the weather after this amazing summer (I’ll leave you to decide which of Stan and I is Compo, Cleggy or Foggy).

The guidebook gives a typically understated description: “A route of some substance, picking an interesting line up some of the steeper sections of the wall”, E4 5c. To spice things up further, Stan is recommending that I take the No Way Jose variation: “A steep and thrilling direct version, continuing in one monster pitch to the top”.

Sure enough, the sun is shining by the time we arrive, though there’s a biting wind blowing off the sea. The first challenge is to try to get the ab rope down! 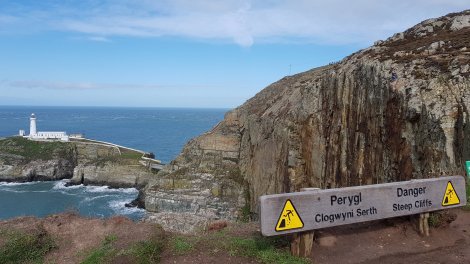 I watch amongst the grockles spectating from the opposite cliff top as Stan raps into the stance and overhear: “But what’s he going to do now? I don’t think there’s a path up from there.”

Too true… The view upwards from the base of the route is the usual mish mash of crusty lumps of brown quartzy rock sticking out of an underlying matrix of talcum powder. 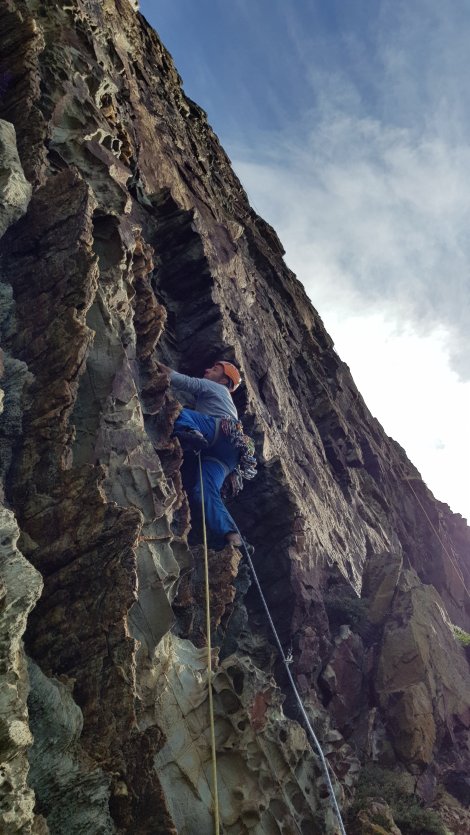 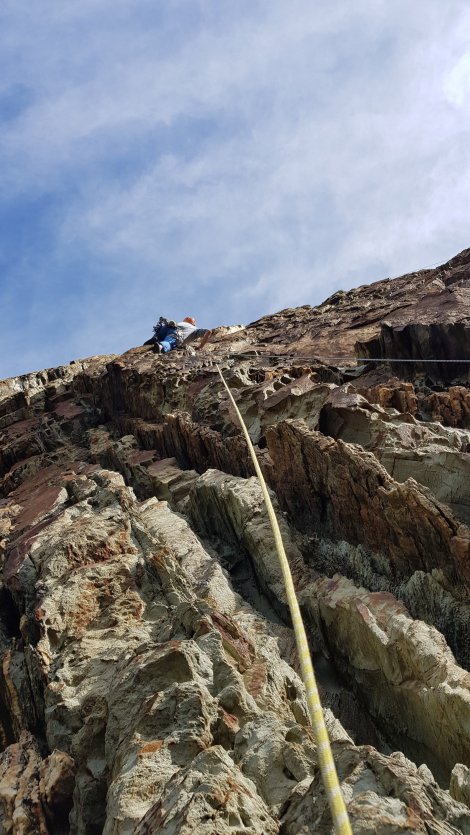 Weirdly folded bands of crud and rock are testament to the huge geological forces that shaped these cliffs over the millenia – the nearest analogy I can find is a block of Vienetta ice-cream, with the trick being to weight the fragile crinkly chocolate bits without breaking them! Absorbing stuff, and always takes a bit of getting used to each year after the bird nesting closures. Stan climbs smoothly up the pitch and then it’s my turn to follow, leaving the crashing waves far below.

Arriving at the stance, I admire the reassuring state of the fixed gear in the “two bolt belay”

As with the first pitch, the actual climbing is pretty straightforward. The testing part is the concentration required to seek out islands of solidity in amongst the sea of dusty gloop, and the endurance to hang on and knit together some web of protection as you go. There’s not much in the way of 5c moves but plenty of E4!

We’d topped out before the cafe had closed, and figured that we should celebrate survival with a cream tea rather than chance a benightment with another route. Anyway, these routes are to be savoured not guzzled; just like any vintage red. Grand day and a useful reminder that you don’t have to be on a big wall to have a big adventure.

3 responses to “Last of the summer wine”