This is a really fab spot, and only 5km from our favourite campsite in the Durance (Le Verger just north of Roche de Rame), and I can’t really work out why we haven’t been on previous trips. This huge South / West facing wall has a host of long-established multi pitch routes at its right hand end 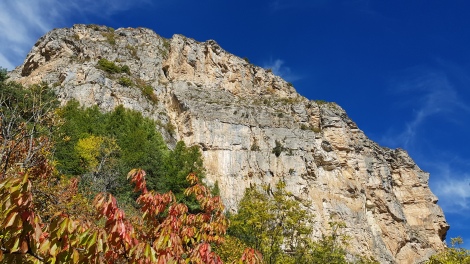 has a great selection from 5c to 6c. The guide describes it as a slab, and it’s certainly generally the right side of vertical, but banish any thoughts of smearing or padding – the rock is riven with great edges and the climbing is an absolute pleasure. 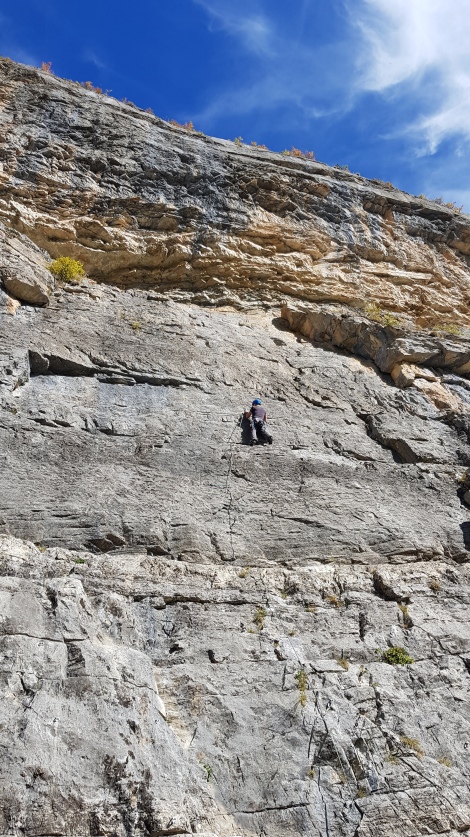 It’s worth a few words on the approach as the drawing in the guide (at least the edition we have) is wrong and will result in a miserable scree slog (we know!). Park on a tight bend, just beyond a wooden bridge (room for about 4 cars). Cross back over the bridge and immediately bear left up what looks like a private driveway to a chalet, but then turn left after only 10m up a somewhat hidden path which heads up the side of the stream through attractive woodland. The path levels out and then branches at a large cairn where you go straight on for the longer routes or head left for the single pitch stuff. Carry on this good path, ignoring the temptation to branch up to the crag on any of the poor trods you pass. Instead, keep following the good path until beyond the end of the crag where it finally heads up in a couple lazy zigs and zags, maintaining a gentle gradient throughout and depositing you at the right hand end of sector Hot Roc. Here’s a wikiloc trail which you need to follow in reverse
https://www.wikiloc.com/wikiloc/view.do?id=29248128

Anyway, back to the climbing – we did half a dozen routes, all good, with the pick of the bunch being L’ete des caracules, 6a+ and Voyage a L’Hassa, 6c (sustained 6b up to an intermediate lower off around 30m followed by some tricky bridging and a bit of a pull through an overlap for the 6c tick).

Outstanding views down to the pretty village of Saint Crespin and the lower Durance valley.