We stumbled on Ticino (the southernmost canton in Switzerland) as a climbing area somewhat by accident. There’s a handy campsite (Camping Isola) which is one of the few open all year round, and it was a convenient place to break the journey. Having dipped our toe in the water with Galbisio we did a bit of Internet research and found there’s an absolute ton of climbing. There’s a nice article here suggesting a Top Ten https://www.ticinotopten.ch/en/adventure/free-climbing

Anyway, it’s an enchanting spot and the forecast is great for the next few days (weeks in fact, but we don’t have that long) so we’ve taken the plunge, demounted the van and found the local climbing shop…

and splashed out on the local guidebook – eye-wateringly expensive but it does have almost 3,000 routes and comes in three languages!

The web article says: “Ponte Brolla is a classic destination for aficionados of ‘plaisir’ climbing.” Pleasure AND climbing? What’s not to like? Better check it out!

The climbing at Ponte Brolla is located on an impressive granite dome overlooking the village of the same name, encircled by a meander in the River Maggia. 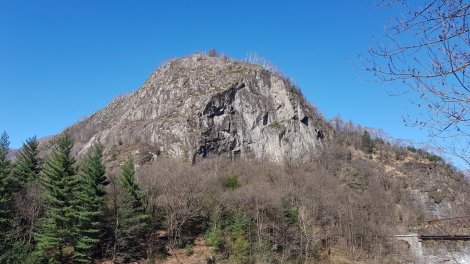 The South Face has slabby routes on numerous tiers up the side of the dome, whereas the East Face is steeper (partially quarried?) and has tougher mostly single pitch routes. That’s where we started.

Parking is a bit of a pain – everything in the village is either private restaurant parking or pay parking with a 4 hour limit. Best to park on the main road at the end of the footbridge and walk over. This brings you out at Grotto America (a restaurant, not a cave!) immediately beneath the east face. Head through the gap in the stone wall shown in the picture below and turn immediately left up steps to follow the waymarked path to the crag. 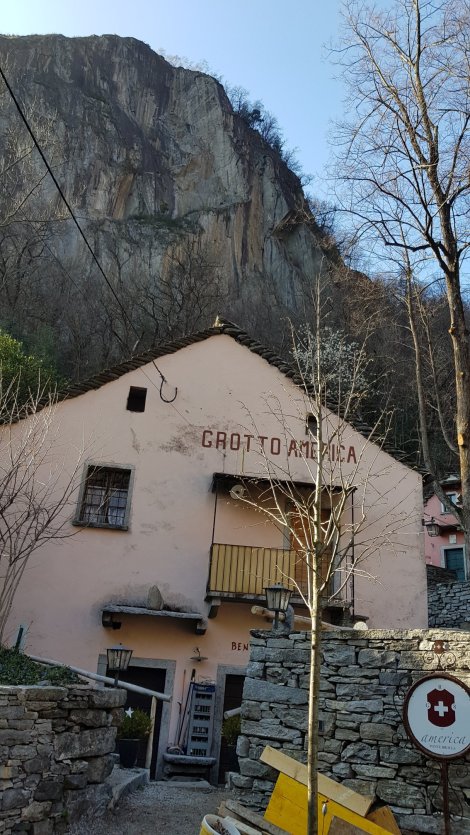 The east face has a really impressive and somewhat disorienting rock architecture, with all the main features leaning to one side – we did a couple of “slabby looking vertical” routes and ended up lowering off about 10m to the side. Here’s Helen on Quassu, 6a+

… and me on Tuto, also 6a+ but “expo” with about 7 bolts in 25m which felt quite exciting enough!

It was one of those “Goldilocks days” when it was uncomfortablly hot in the sun (23C) but somehow a bit chilly in the shade, so we followed the sun round to the south face and instantly regretted it – you could have fryed an egg on the rock! These temperatures are obviously far from unusual, as indicated by the profusion of palm trees along the base of the crag

Palm trees in the alpine foothills in Switzerland? Bonkers! 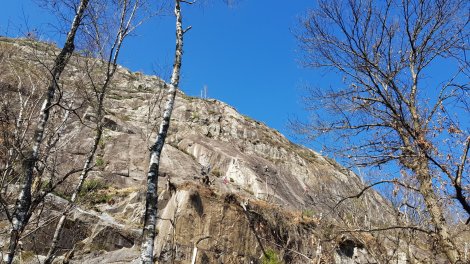 We braved the heat to do Wacklestein, 6a+, which takes an unlikely line up an overhanging arete.

Another day on the granite confirmed the quality of the climbing, but also the shellshock of the change in style from Greek limestone. Probably a good translation before the trad season opens at home!