I remember an early Gogarth experience with Paul, over 25 years ago, when we ticked three major 3* classics (Dream, Gogarth and something else – obviously I don’t remember it THAT clearly!). That’s when I got truly hooked. Paul commented at the time that at this rate we’d run out of routes…

Fast forward to the present and the early morning blast along the A55 coast road with Stan, and talk turns towards our objectives for the day. A bit early in the trad season for anything too taxing, and of course the bird ban rules out almost half of the possibilities – what we need is some untravelled territory with some amenable routes to reacquaint ourselves with the fine art of Gogarth climbing. The guidebook has just the answer: Hustler Area – This amazing area provides the adventurous with splendid routes in a setting that epitomises the Gogarth Experience.

Arriving at South Stack to cloudless (but breezy!) skies, we encounter the day’s low point – the cafe is closed for renovation FOR SIX MONTHS! (There’s a catering van serving similar fare, but nowhere inside to sit – fingers crossed for sunshine at The Rucksack Club Gogarth Meet or there’ll be an outcry (15th & 16th June – be sure to be there! https://rockaroundtheworld.co.uk/2018/06/24/over-the-moon-at-gogarth/)

Anyway, the tides are perfect (low tide 11.15am) and we cruise across the sea level traverse passing numerous teams – looks like everyone fancies a day beside the seaside.

A rather cursory perusal of the guidebook approach suggests the last part after Phaedra is “… a roped traverse” and somewhat foolishly we carried on soloing in trainers. Diminishing holds and barnacled rock prompted a hasty reevaluation, and we roped up (here’s Stan following, with a cheeky seal “photo-bombing” in the background)…

… to get to the stance in the corner of The Hustler – a small ledge a few feet above the briny.

More careful guide reading reveals that this is the first 5a pitch of The Hustler, shared with all the other routes in the area.

Here’s Stan on the excellent main pitch of the eponymous route – given 5b but probably more straightforward than the traverse pitch.

A quick 40m rap and we were back at the stance, now bathed in sunshine, as was the left wall, so we did The Third Man, E2 5b. Outstanding climbing – first a bit bold then quite sustained through a groove and overlap, before big holds through the “green fuzz” lichen zone. Here are a couple of pictures of a guy called Tim(?) following the route a bit later 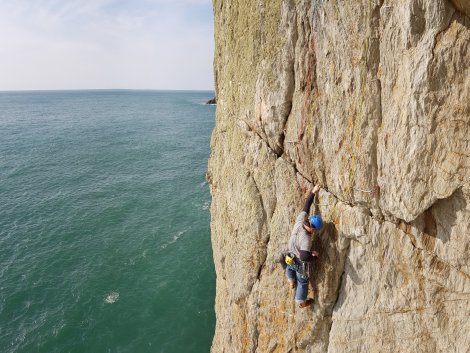 Down again to a hanging belay above the now wave-splashed ledge. By now the sun was on the right wall, so Stan led Mestizo, E1 5b and also very good (and not a whole lot easier than the E2) 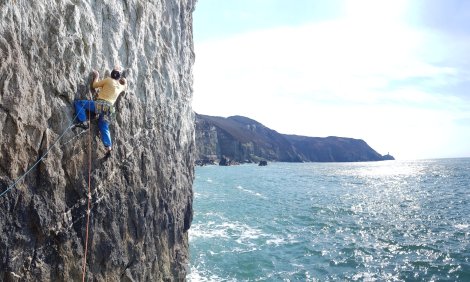 … and just about visible on the optional midway stance contemplating the crux upper crack (the guy on the left is leading The Third Man).

Only 4.30pm so just time to squeeze in another. Gringo takes the leftmost line, via a dogleg out to the arete (nominally a stance but it goes in a oner with careful ropework). Another E1 that was just as hard as the E2, especially with the dreaded green fur obscuring all the holds on the headwall (later reflection on the guidebook photo suggests I maybe took the wrong crack at the top – too far right, which maybe explains the furriness!)

Time for the scrambled top-out via a couple of pitches of a vertical garden of grass, wildflowers and bluebells,

and we’re back at the car around 7.30pm. No doubt we’d made the most of the day!