There are hundreds of routes scattered along the seacliffs around the tiny hamlet of Reiff on the Rubha Mor peninsula – mostly shortish (10 to 20 metres), mostly non-tidal and on well-weathered sandstone. No doubt due to some geological quirk to do with bedding planes, steepness abounds, somewhat offset by an abundance of square-cut features and positive holds (at least compared with our other sandstone experiences from the last couple of weeks).

We picked An Stiuir for a first exploration – offering a good mix of grades on mostly south facing crags around 15m high, situated a pleasant mile or so up the coast. The approach takes you around the pretty inlet of Camas Eilean Ghlais, with the crag on the projecting headland beyond. 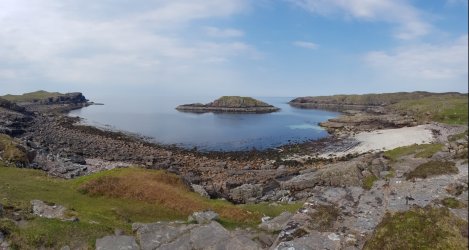 The Seal Song Area is the first you come to: an impressive tilted wall with a left-leaning alignment to many of its cracks and grooves. The eponymous E3 takes the left of the obvious pair of overhanging, slanting cracks in the prow of the largest buttress below. 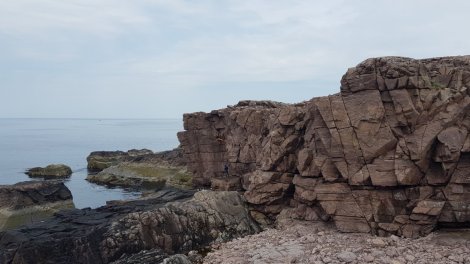 Just around the corner we meet Tim and Russ, a pair of Aberdeen-based climbers, ensconced on The Executioner – the classic E2 up the stupendous juggy corner. 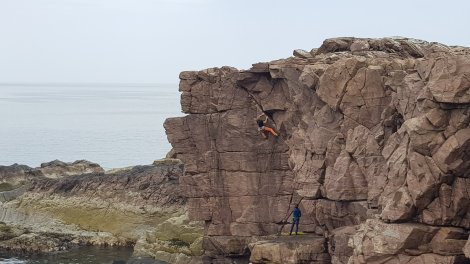 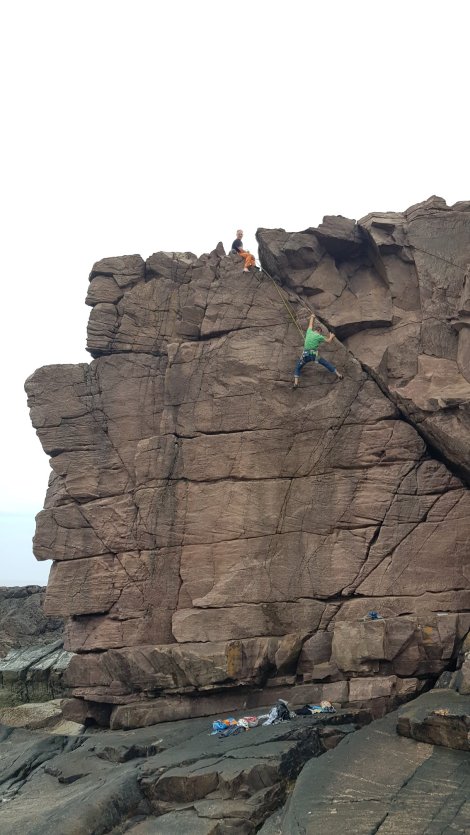 We opened our account with the three VS/HVSs just around the arete on the west face: Brain Biter, Skull Smasher and Hair Splitter – all good juggy fun up steep ground with fiddly gear. Next I did The Executioner (encouraged by Russ relating how it got its name, with one of the first ascent team almost losing a finger!) No need to worry – it’s all jug-hauling and lay-aways; one of those steep routes that feels easy if you move quickly. Then Helen led The Grateful Dead 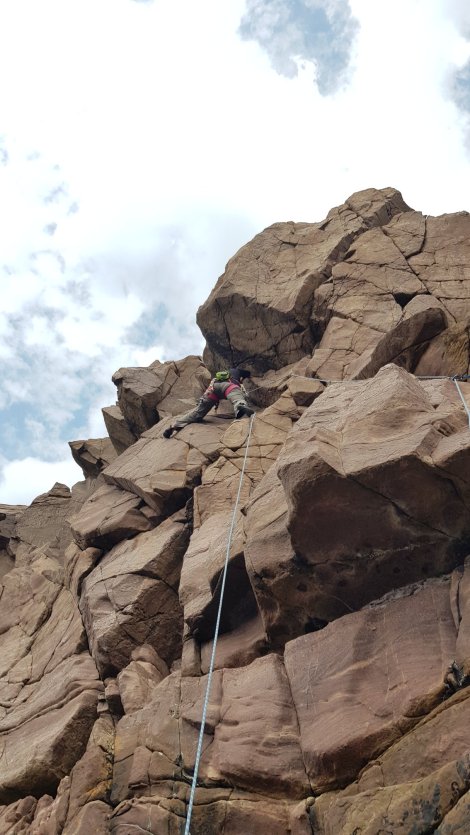 … and we settled down for our butties and watched Russ make a smooth ascent of The Mystic, E5 6b, a stunningly photogenic line up the hanging arete. 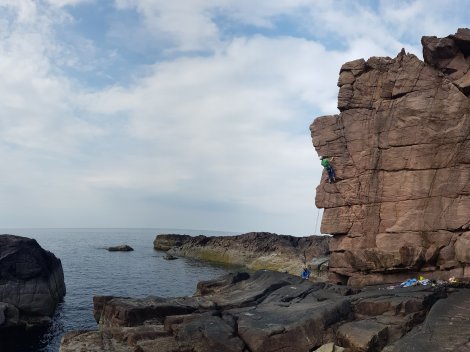 Here he is on the bouldery crux, mid “pop” for the top. 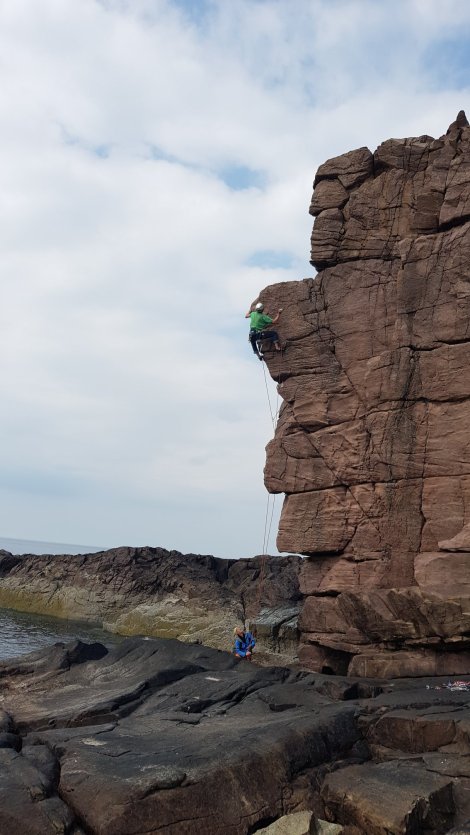 … and then hauling to glory as the sun emerges. 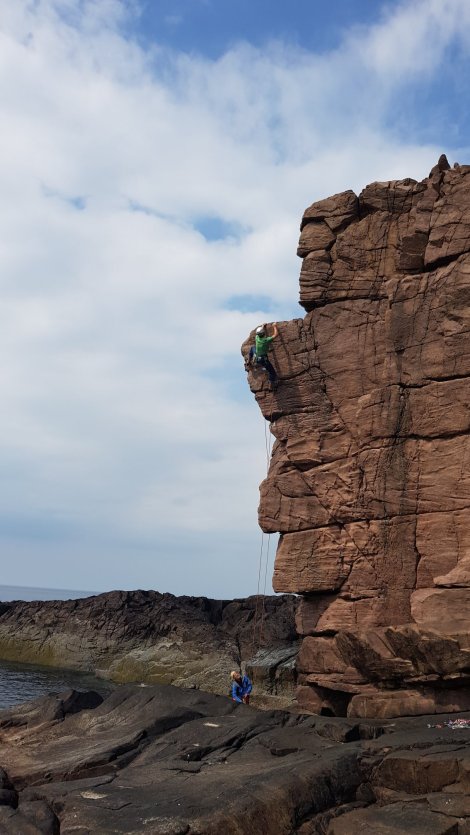 Next I turned my attention to Elastic Collision (apparently a reference to another first ascent incident!) the righthand twin of Seal Song and also E3 5c. Very steep, and quite pumpy, but climbs more like a quarried grit route – combined with good gear and the remnants of my sports climbing fitness it didn’t feel too bad. Absolutely awesome line! You can make out the twin cracks in the centre of the picture below (slightly fore-shortened panorama) with Tim cruising Razor’s Edge, E1, to the right: 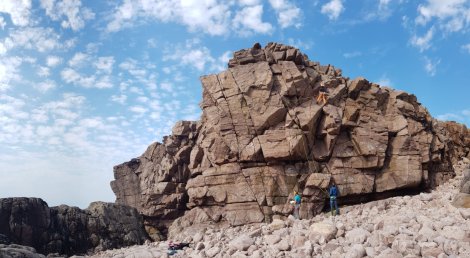 By now it was absolutely cracking the flags and we were pretty pooped. Overhanging Crack (well named!) felt tough for Severe! Time to call it a day. We parked up, more or less by chance, in the parking for the Stone Pig sector (yet another amazing outlook – yawn! I hear you say…) 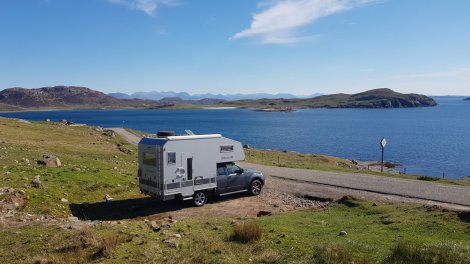 Next morning it seemed rude not to check out what the Stone Pig had to offer. The eponymous stone marks the location of this near-roadside crag. 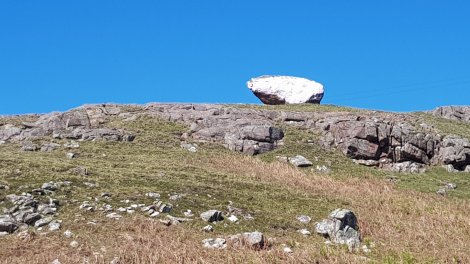 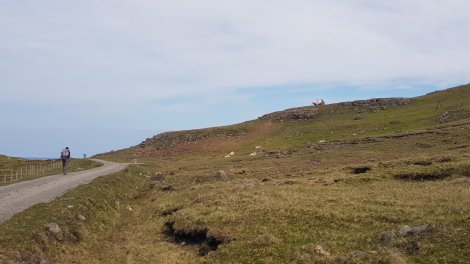 The well-named Leaning Wall Area was home to a couple of pairs of nesting shags, and was therefore subject to an agreed restriction on climbing,

so we confined ourselves to the west facing wall just north around the arete, which has a small bunch of starred VS/HVSs. 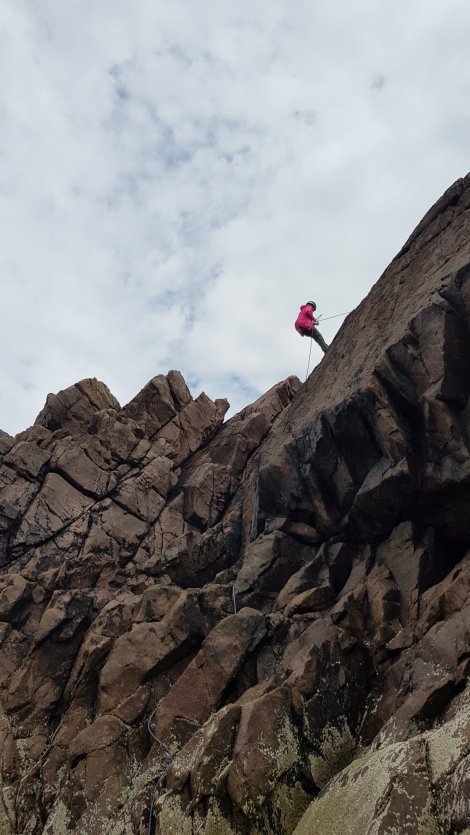 We’d made an early (for us!) start, and so the crag was in the shade and glistening with damp from the recently receded sea. Icarus, VS, gets two stars and follows the slabby right arete of the crag, and looked the most appealing – and so it proved, though it felt poorly protected for the grade and you might want to have a bit in hand.

Back down at the foot of the crag, and all the remaining routes follow corner cracks and looked uninvitingly soggy. Helen pointed at the obviously pleasant slabby arete between Automaton and Nalaxone, which was catching the sun, so we put our “new-routing” heads on and set off to explore. 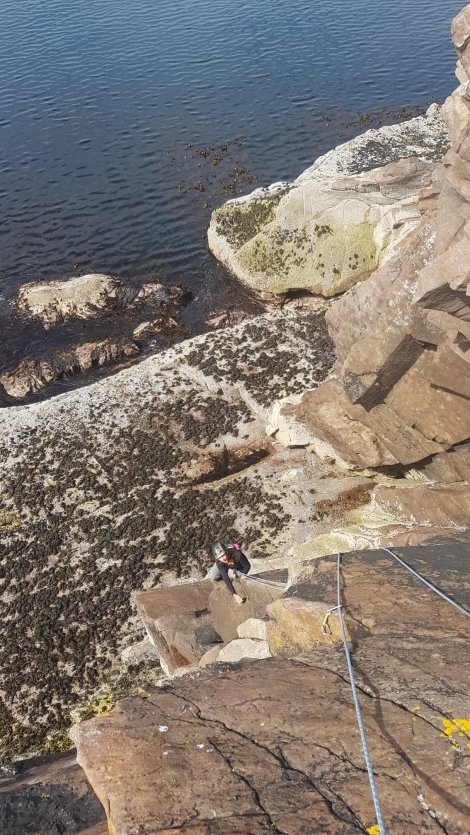 It proved highly enjoyable and we thought it about Severe, or perhaps VS if you took a blinkered approach at the very top and climbed the thin slab between Automaton and Long Hot Summer. We rather guessed it had probably been done before, but tentatively christened it Snouter (from the game Pass the Pigs, which seemed fitting for an arete).

Now in exploration mode, we picked off another couple of obvious lines up the undercut slab between the descent route, Slabby Corner Crack, and Daunt’s Arête. The right of these (Double Leaning Joweler, VS 5a?) has a fun and tricky couple of moves up an overhanging slot to get established on the slab, which soon eases. The left (Makin’ Bacon, Severe) takes the crack 2m left to gain an easier entry onto the slab and follow a parallel line to the top. Both quite worthwhile, and if nothing else they passed the time until the sun came round and dried up the other routes, which we also did. Here’s Helen rapping back in for more

A bit of internet research established that the arete had been climbed in 2009 and recorded as Cloud Appreciation Society HS 4b ** in the SMC New Routes Supplement (so much for Snouter) but there’s no mention of the other two. Anyway, together with the existing recorded routes they offer an enjoyable day’s worth so here’s a mini topo. 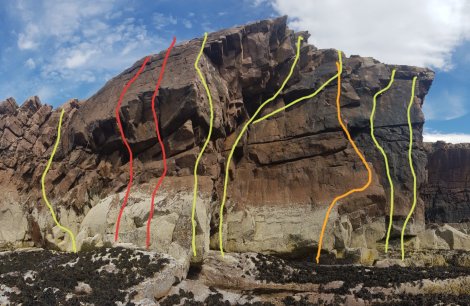 The glorious weather was forecasted to crap out the next day, so we took full advantage of a final peaceful evening enjoying the sunset with the backdrop of Stac Pollaidh and Suilven.

It really is a magical part of the world!