In search of some steepness, we planned to leave north Pembroke and head for Gower via an exploratory visit to Morfa Bychan on the Carmarthenshire coast. The only flaw being that high tide was around noon so we’d be twiddling our thumbs waiting for the crag to be out of the water…

The perfect solution lay just a mile’s walk from our campsite (near Porth Clais) in the form of The Lobster Pot, a Deep Water Soloing venue. For the uninitiated, DWS involves climbing unroped above (you guessed it!) Deep Water, resulting in a splosh rather than a splat should you fall off. High tide is generally ideal – the more water the better!

After a bit of of trepidation I thoroughly enjoyed the experience, notching up a bunch of 5s (DWS uses French sports climbing grades) 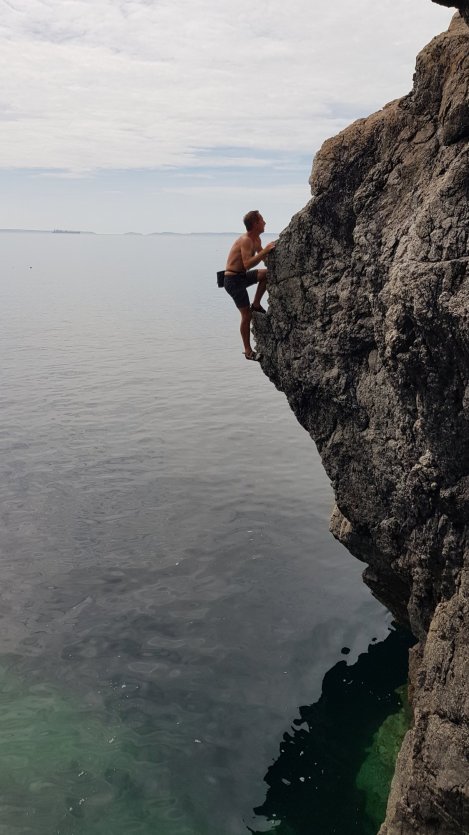 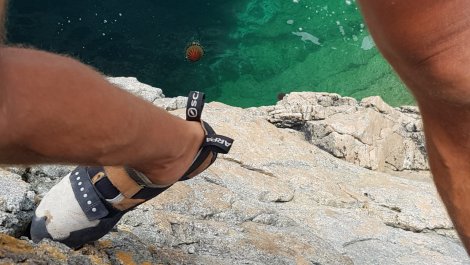 Anyway, that kept us amused for a couple of hours, and by the time we’d driven over to Pendine and worked out the approach route over the headland the vast majority of the main crag was ready and waiting: 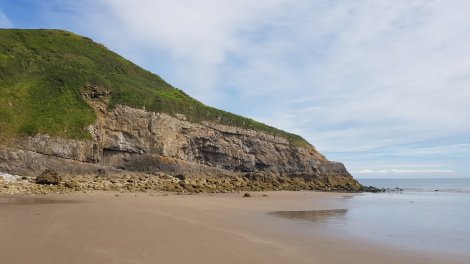 It’s an attractive spot, immediately next to a quiet sandy beach, and you can drive down to it (providing you don’t have a 10ft high campervan). It’s also a complete suntrap, and was far too hot for any major exertion! Here’s me on Heading South, a stiff 5c, (yes, we’re back in bolt land)

and we also did Bull Market, 6b+ and Insider Dealer, 6a. The pick of the routes are 7a or thereabouts and were just too warm to contemplate.

Heading around the corner to zero zawn

(very tidal and only accessible for about 3 hours a day) we at least got a bit of a breeze, which provided enough enthusiasm for a final route – Dismal Differentiator, 6a+ and tough with it (but very photogenic) 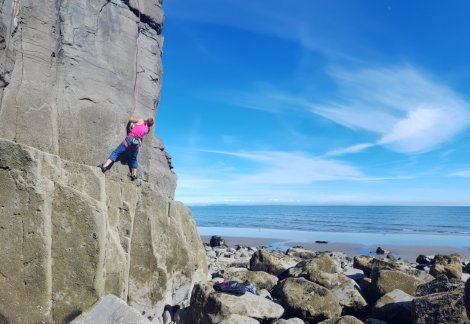 … before a dash along the beach enabled a speedier return to the van at Pendine.

On to Gower and a magnificent spot at Arthur’s Stone amidst the wild horses and with views of the Carmarthenshire coast where we’d just come from.