Waking up in Wasdale (after celebrating Nick’s Joss Naylor success) to find it wasn’t raining, there really was only one option – a day on Scafell. It’s a pain to get to and the rainiest place in England, so these opportunities have to be grabbed with both hands (even though both legs are saying they’d rather go roadside cragging!)

Jim and I head up the somewhat grim grind of Brown Tongue in muggy sunshine, but as we enter the natural bowl beneath where the crag should be there’s only thick clag to be seen. The final pull up the screes gets us within sight of some rock and we can just about make out the unmistakable line of Botterill’s Slab, and sure enough there’s Great Buttress to the right.

There’s just a single team on the whole crag, at least as far as we can see, and wouldn’t you know it – they’re halfway up the first pitch of our chosen route: Saxon E2 5c. Mild annoyance (mostly at ourselves for not getting started earlier) is soon transformed when the belayer says: “Hello Dom, fancy meeting you here!”. Closer inspection of the well-wrapped-up figure reveals it to be Dave (who coincidentally I’d been climbing with at Staden the previous Wednesday evening). Small world, and great to have some capable company when tackling a challenging route in dodgy conditions a long way up the hill.

Pete, meanwhile, is making steady and uncomplaining progress up an obviously damp first pitch – the lack of whingeing being at least partly because he’d completely lost his voice (sterling effort being out at all!) Dave was soon following the pitch

… and I was pleased to think of a few helpful dabs of chalk marking the way.

I was soon leading up after him, with steady climbing up a corner to an exciting traverse right onto a ledge then a tough, goey move to reach easier ground and a romp up to a commodious stance. Probably more 5b than 5c, but excellent quality. Here’s Jim nearing the stance, with spectacular views down into Wasdale behind him (or not…)

… and a selfie from the same spot with a panorama of the Gables behind.

… It was quite claggy and a bit chilly (what do you expect on a north facing crag at almost a thousand metres in the middle of a cloud?)

Up above, Dave was getting to grips with the main 40m crux pitch – bold moves on thin fingery flake holds

… leading out to the arete 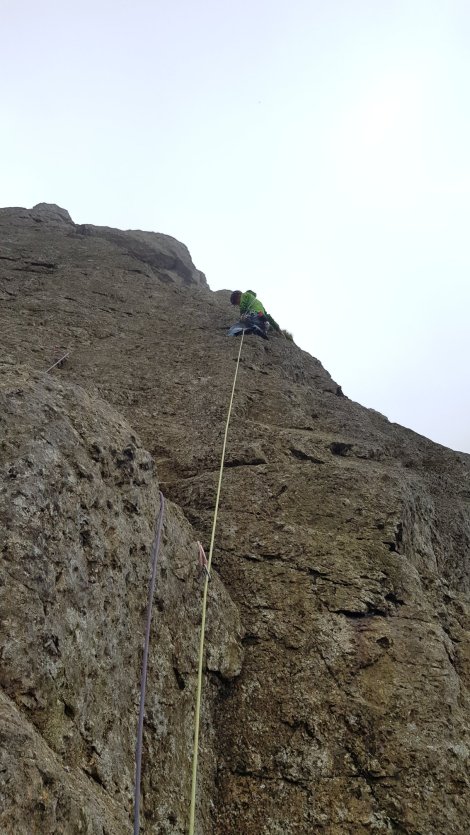 … and then traversing back left to climb up to the base of the striking diagonal crack (atmospherically swirling in and out of the mist).

The route changes character here, from technical, balancy and a bit scary to upright and more physical but with bomber gear (thanks Dave for lending me the big cam!) Unfortunately it’s also pretty smeggy in the crack and what should be bomber jams are sopping. 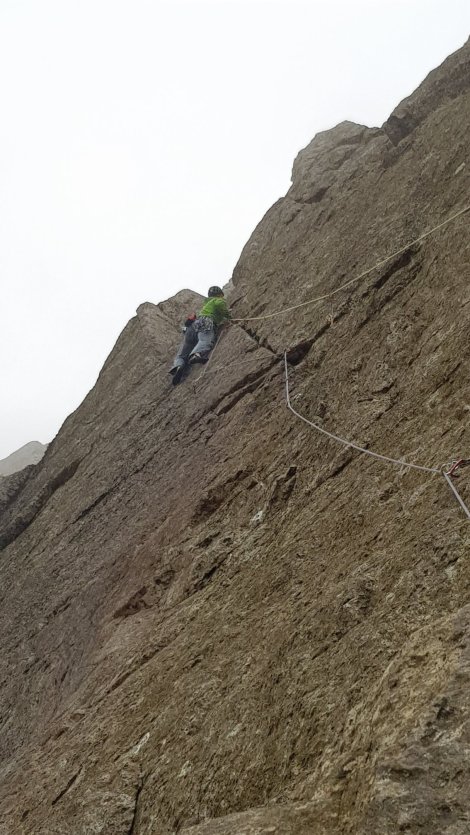 By the time it was my lead I was really grateful for the chalking and drying from Dave and Pete’s passage, and just about managed to sketch through the sogginess.

Pitch 3 doesn’t get as much of a write up, but it’s no pushover at 5b. More hard moves up a damp groove and a tricky sequence pulling round left into another corner are topped with committing moves up a crimpy wall and massively exposed arete. Another 40m of high-octane entertainment and a fitting finale to what’s been called the best E2 in the country (and I’d be hard pressed to argue).

… and views down into Wasdale

One response to “Saxon on Scafell”