With the seemingly inevitable new “hottest day on record” arriving this week, the fickle relationship between climbers and the weather is exposed: “It’s too hot!” There’s no pleasing some people (me included!)

Monday’s good forecast coincided with a long held plan by Mum and me to explore one of the plane wrecks on the Moors. We parked up at Snake Pass for the pleasant stroll along the Pennine Way

before heading up towards Higher Shelf Stones to the wreck of the B-29 Superfortress ‘Over Exposed’ that had been used to photograph Pacific atomic tests in the 40s. There’s a good write-up of some of the history here https://www.mammut.com/uk/en/stories/walking-the-peak-district-aircraft-wrecks/ along with details of a couple of other wrecks nearby.

It is amazingly well preserved, and a chilling monument to the tragic loss of the 13 crew. 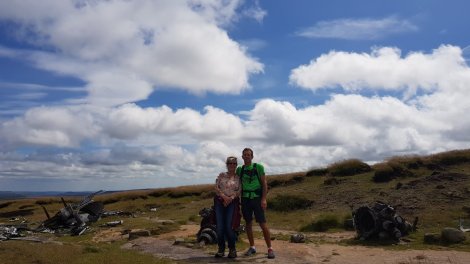 and a bit of wild solitude, especially if you take the return loop down Crooked Clough. Perfect way to escape the heat too, as it was kept well in hand by the strong breeze – much like being in a hairdryer.

Tuesday was toasty as well, and too hot to climb, so I took a jog up to Seal Stones on the Kinder North Edge and then down Fairbrook Naze. Great view across The Snake to our previous day’s walk on Bleaklow, and the helicopter shuttle of moorland restoration activities.

Tumultuous thunder and lightning show on Tuesday night, followed by the inevitable deluge, gave everything a good wetting, but the sun was back out by early afternoon and the plod up to Shining Clough was a tad sweaty… 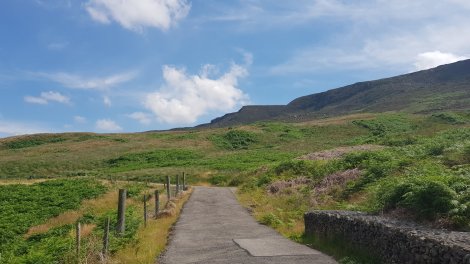 Luckily we managed to find the path (somewhat overgrown these days) and were in the soothing shade in about 40mins. This really is a magnificent crag, with routes up to 25m up stunning crack lines pocked by the occasional huge porthole or other wind-worn feature. Shame that the approach and aspect mean that it doesn’t get the traffic it deserves, and all but the popular classics could do with a bit of a clean.

I started with perhaps the star attraction, East Rib, HVS, traversing out to grapple with the impressively exposed Arête. Here’s Andy following 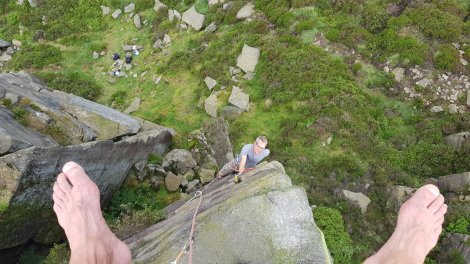 Andy “took one for the team”, picking the less-travelled E1, Naaden, which felt tough to follow even after Andy had cleaned off some of the scrattle. Then we caught up with Gareth and George (photogenically decked-out in yellow)… 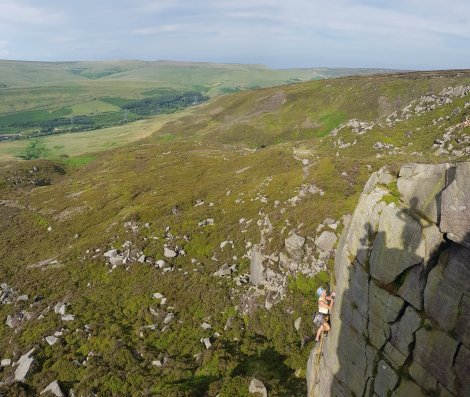 I did the burly but pretty clean Galileo, E1 and well worth its couple of stars, whilst Andy ventured up the somewhat dirtier Holme Moss (given E1 but well worth E2) with Jeff and James on the adjacent Gremlin Groove.

We finished off with the outstanding Phoenix Climb – is there a better VS on Grit? (… and therefore anywhere in the country?) And what an amazing first ascent by Rucksack Club legend Peter Harding in 1947!

By now the sun was gracing much of the crag with its presence, 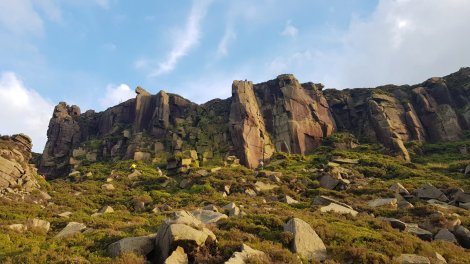 but unfortunately so were the midges – we beat a hasty retreat and watched Chris, Ian and Jeff in a midge-net protected ascent of Stable Cracks. 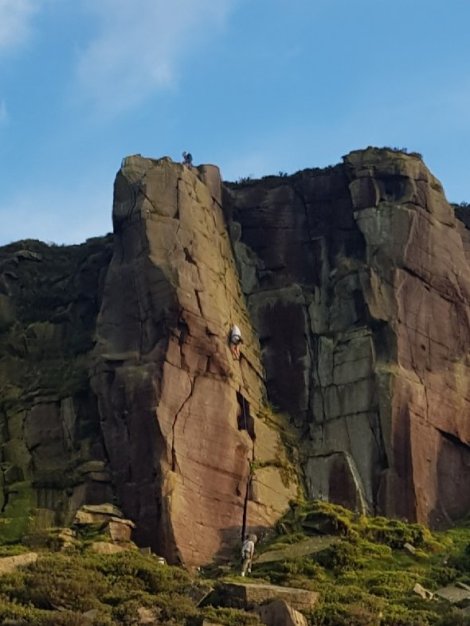 Thursday marked the zenith of the hot spell, with Peak temperatures peaking at 34C. Realistically, too warm for even a shady crag to be comfortable, Helen and I decided to use the opportunity to check out a couple of recently developed sports spots that escaped the sun. First up Deep Rake is quite a find, hidden down a hole on top of Longstone Edge, it’s not obvious until you almost tumble into it! The clue is the beautifully engineered pair of steps that allow you to hop over the barb wire fence…

The rake has climbing on two opposite walls, but unfortunately we’d misinterpreted the sketchy information available and the impressive wall turned out to be the sunny one:

One to come back for, when it’s a bit cooler (and when you’re feeling strong – the best of the routes look to be in the 7s).

Opposite is a shady wall with just a couple of routes. I did Chossword, 6b, which reflects the current state of the rock, though it offers fun, steep and juggy climbing which might just clean up into a classic. Here’s Helen on the adjacent Happy as Lazarus, 6a+. 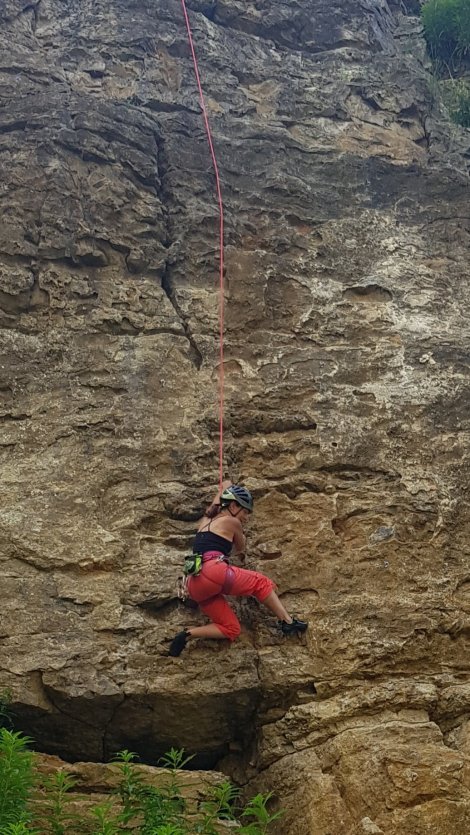 Off to explore our second new crag of the day, and at least the east wall of Bradwell Dale IS in the shade. The pleasant micro crag of Ladybird Walls has 5 short routes from 5 to 6a+. Here’s Helen on Ladybird Arête

A threatening shower prompted a curtailment of activities, but as they say: “Time spent in reconnaissance is rarely wasted.”

Finally, on Friday, we visited the perfect shady crag for a half-day, but unfortunately by now the weather had broken and the temperatures plummeted by almost 15C to a still-pleasant twentyish. Drabber Tor in Wolfscote Dale

(about a mile downstream from Celestial Twins) is an escoteric outlier, undergoing a bit of a renaissance thanks in part to the addition of some bolted lower-offs. Three routes share a common start and are all worth the 20 minutes walk and paddle / stepping stones hop required to get there. All well-protected and on generally sound rock (usual Peak Limestone heath warnings apply!)

The original route, Perlusive, is a fine and logical line (E2 in the latest BMC guide, HVS on UKC and probably E1). 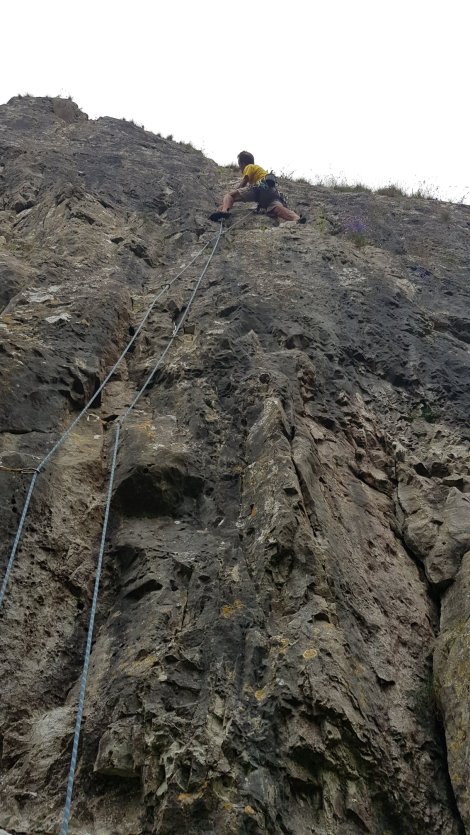 Breaking out left from this around half height is North Winds, worth E2 and 3* if you avoid all the holds on Perlusive, with a great sequence through the first pocketed wall and a tough move above the break involving a mono and a crimp. The final variant is Peace, E2 or 3 (take your pick) but definitely 6a, which tacks on a puzzling move left from the final break. Tough!

Postscript: Another week and another mix of scorchio and storms prompted Jim and me to revisit Deep Rake. The “sunny side” was toasty but tolerable (and dry!)

and we ticked most of the routes up to 6c (and flailed on the 7a of Rake’s Progress). We then bumped into Nick and Lesley, who had dropped in to make the first ascent of his route on the shady side: Fat Lad Exam Failure, 6a+, and kindly took pictures of me making the second ascent:

Better rock and easier than its neighbours, with some fun moves on the unusual (for a limestone quarry) lay back flake crack. Worth a star – thanks Nick!