With The Casual Route on The Diamond and The Scenic Cruise in The Black ticked off, we’d exceeded all expectations for the trip, but still had five days left before flying home. You know what they say about idle hands, so I set about extending our itinerary.

Bill had never visited the desert climbing areas of the States, and while Utah would be a bit of a diversion, Colorado National Monument represents a pocket-sized snapshot of all that’s unique about the area: sandstone, mesas and especially towers. It also happened to be on our route back to Denver. 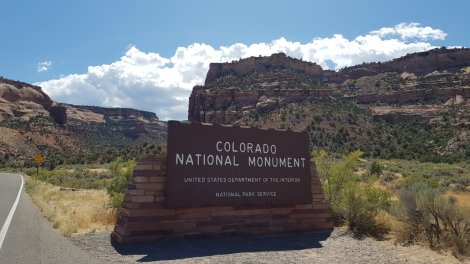 The Colorado National Monument sits just west of Grand Junction, the confluence of the Colorado and Gunnison rivers (we could just have jumped into The Black and floated there…) It enjoys stunning sandstone scenery – 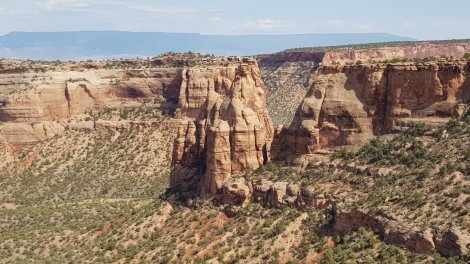 Recommendation: if you are camping, try to bag site 80 on C loop for jaw-dropping views of Independence Monument and the rest of the towers in Monument Valley right from your tent! 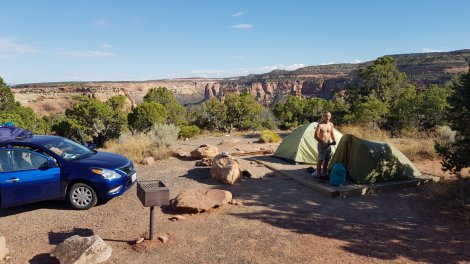 The campaign to recognise and protect the area as a National Park was led by John Otto and on 4th July 1911, to celebrate his success, he “engineered” his way up the most prominent tower, which became Independence Monument. He used a combination of carved holds and rungs in drilled pockets; perhaps the most blatant chipping incident in climbing history, but the remains of this project leave behind a really fun 5-pitch 5.8/9 to this spectacular summit. Just the kind of memorable but relaxed project we needed to wind down from the excitement of The Black.

The walk-in takes about an hour, through wild-west landscapes passing grazing Big Horn sheep on a well maintained trail. It was a tad warm though – just touching 100F… 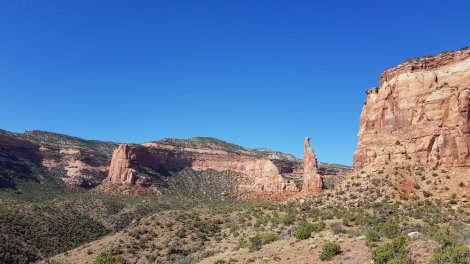 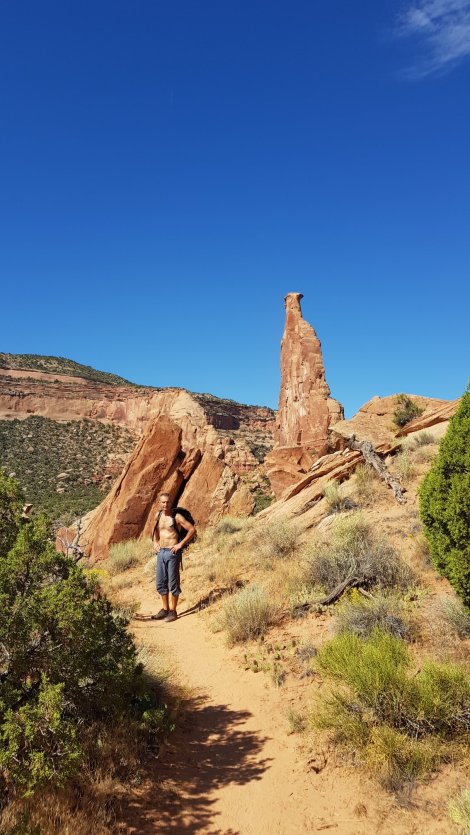 The Monument comes into view and thankfully Otto chose to carve his line up the shady side! 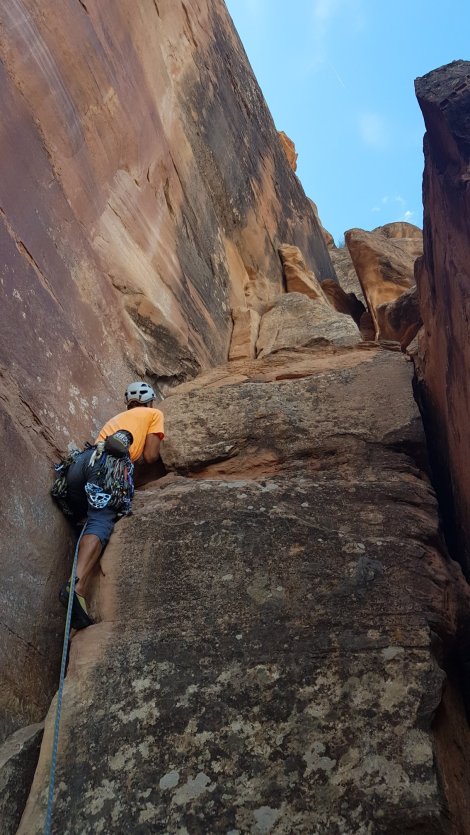 … and a view of a couple of the drilled holes which now serve as handholds and potentially crafty gear placements. 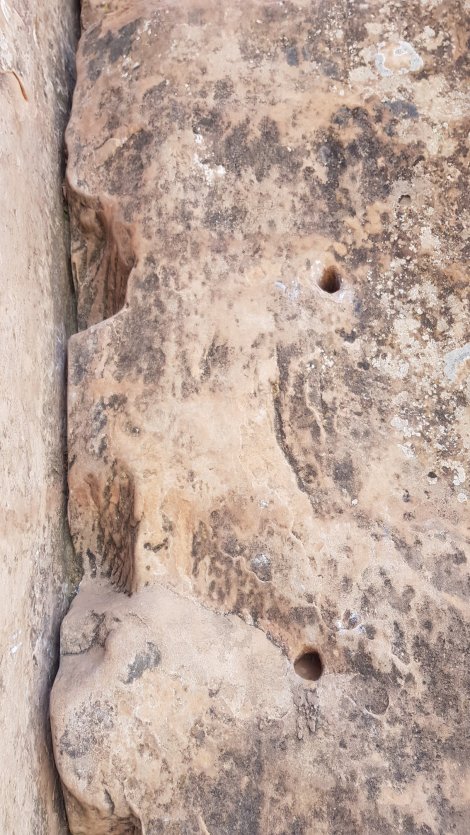 About a hundred metres up, the route jinks through “The Time Tunnel” to “Lunchtime Ledge” 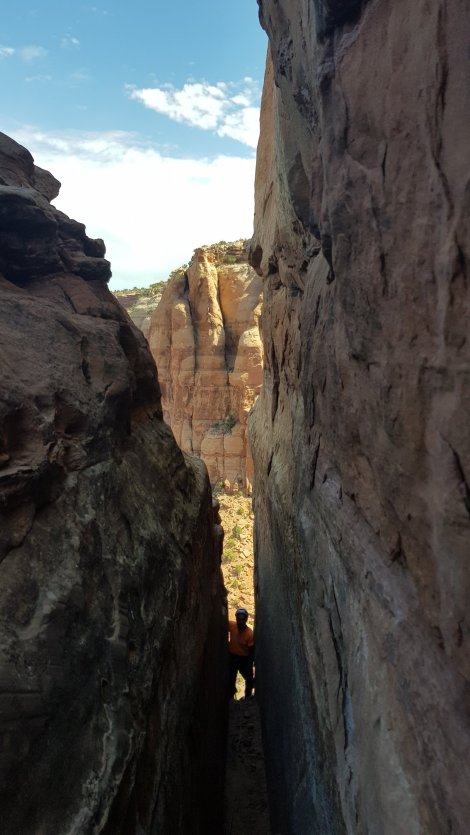 Before the penultimate and probably crux pitch up a groove on chipped (but sandy!) holds. Thankfully there are three spanking new bolts protecting this section. 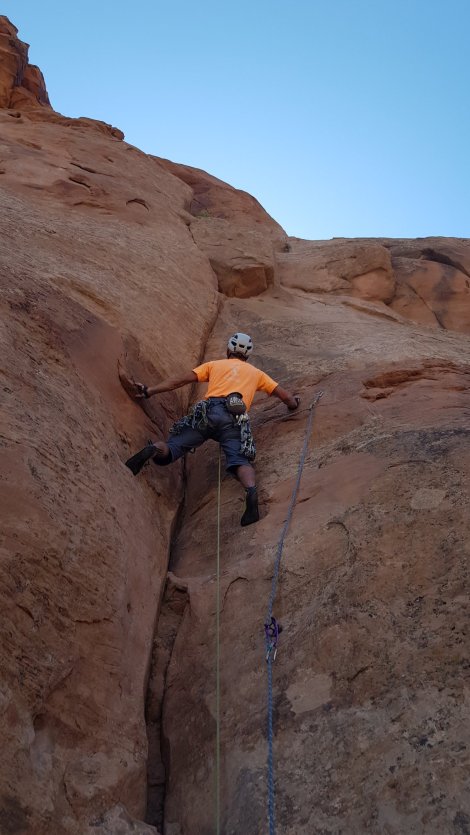 Onto the ledge on the west summit ridge…

… from which you head for the top!

The final pitch is spectacular and tremendous fun, with the final pull over the capping overhang actually being fairly stiff (but again protected by a couple of shiny bolts). The whole thing is maybe VS/HVS and definitely 3*

There’s even a summit book to write your name in (sadly it doesn’t date back to 1911 though).

… and of course 360 degree gobsmacking views.

Route beta: we took about an hour to walk in, not much more for the route and 40mins to walk out again. 2x60s make for an easy 3 rap descent, but I guess a single rope might be an option. If you are comfortable at the grade then you only need a very light rack, with maybe half a dozen draws, a few mid to large wires and small to medium cams (maybe a couple of purple camalots) PLUS A #4 for the P2/3 off width.