… in search of steeper rock, with some holds (and some gear!) Shagg Crag, just over the border in Maine, promised the perfect slab-antidote – it’s the absolute antithesis of Whitehorse: literally 90 degrees steeper (overhanging by 30 degrees), plastered in jugs and equipped with bolts, most of which even have perma-draws.

The crag is a fairly recent discovery named after the adjacent Shagg Pond,

but the source of endless pun fun for local first ascentionists!

Our visit got off to a rubbish start as we found the road blocked by a tree-felling operation just half a mile from the crag parking but necessitating a 50 minute detour – Aaargh! 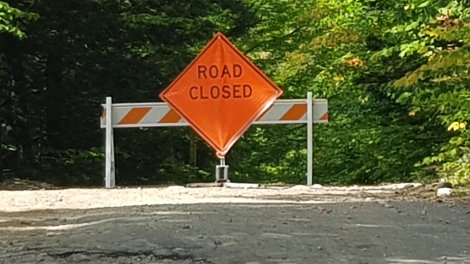 (follow the blue paint splashes) until a climber’s path drops down rightwards to the base of the crag.

We were surprised to find a team at the crag (they’d walked through the road closure despite dire warnings of “blasting!”) and even more surprised to hear they’d travelled up from West Virginia and North Carolina – checking out Shagg on the way to the weekend climbing festival in Rumney (which we’d decided to escape!)

It’s an impressive bit of rock!

There are a smattering of easier routes on either end, but almost everything is 5.12 and up, with the exception of the stunning 5.10c that blasts up a diagonal weakness in the centre of the crag: The Great Escape. Simply outstanding (and surprisingly straightforward)!

Beyond that “warm up” you have to up the ante somewhat. Here I am on Zag Shagg, 5.11d, which is a 5-bolt extension to The Great Escape – managed the moves but with a couple of rests.

Sadly, by now it had started raining – no problem for the majority of the routes apart from those that have a lower off at the top of the crag; there it was getting pretty wet! Not much incentive for projecting, so I had a go at It Ain’t Pretty Being Easy, 5.12a – chuffed to get up to the wet-zone then turned into an aid-extravaganza through a waterfall to reach the lower-off. Time to abandon ship!