The Fort at Sagres dates back to the 15th century when it was the stronghold of Henry the Navigator during Portugal’s Golden Age of naval exploration. The walled peninsula is a major local tourist attraction, but there’s not a huge amount to see as most of the original structures within the walls were destroyed by a tsunami in 1755 (we weren’t alone in being caught out by a big wave!) 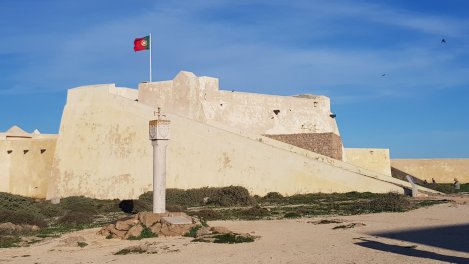 The peninsula that the Fort is built on juts out into the Atlantic by about a kilometer and is ringed with fabulous limitations cliffs around 40m high – there’s almost as much climbing potential here than in the whole of Pembroke. It took a visiting Brit, Andy Reid, to pioneer the first wave of development, with around a hundred routes; mostly trad. Luckily I’d just washed and WD40’d my rack after our exploits on The Mirror, so we were good to go…

We’d heard mixed reports of whether climbing was tolerated in the Fort and decided to keep a low profile, but our huge rucksacks didn’t get a second glance from the cashier and we got cheerful enough greetings from the fishermen we met.

We headed for the Pleasure Ledge sector, which looked to catch the sun (it certainly did!) and have a ledge at the bottom (two out of two!). It’s fairly easily identified by the huge square-cut corner where the path to the lighthouse meets the coast. Here are the GPS coordinates N36.993804, W8.9497445. Look carefully and you’ll find a titanium bolt and chain for a rap point.

Here’s the view from the ledge

The obvious corner is Burning Briogues (sp?) HVS, but still retained glistening dampness in the shade, so we plumped for Golden Shower, E1 5b, which takes a parallel flake line about 15 to the left. This turned out to be very good, and plenty demanding enough. The rock is immaculate but a bit rounded in places, offering fewer options for gear than you might imagine on first inspection. Put it down to poor fitness, lack of trad-head, or the intense heat, but it felt perhaps more like E2, and a good 35m workout. Here’s Jim nearing the top

Having been fried (or perhaps broiled) and feeling a little circumspect about the trad grades (there are no descriptions in the guide, and some of the routes clearly rely on the occasional bolt, now long disintegrated) we moved venue by a few hundred metres to The New Redoubt N36.995035, W8.950335. A couple of shiny titanium glue-ins mark the abseil line down the fine open corner / groove of the well-named Gentle, V+,

and more importantly a bunch of reasonably shiny Fixe hangers mark the way up. Here’s Jim about to enter the groove 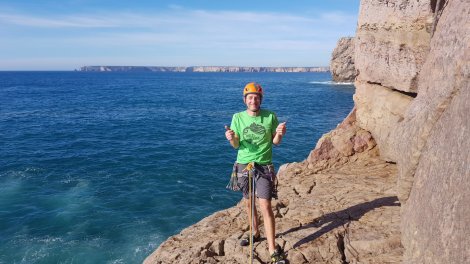 and I set off up the route to the right: “I Called for a Rope but they threw a rock” (must be a story there somewhere!) supposedly 6a. Either this is part trad, shares much of the last line or my eyes are failing, but in any event I didn’t spot the bolts and ended up on the route further right again up the spectacular arête and crack in the headwall. 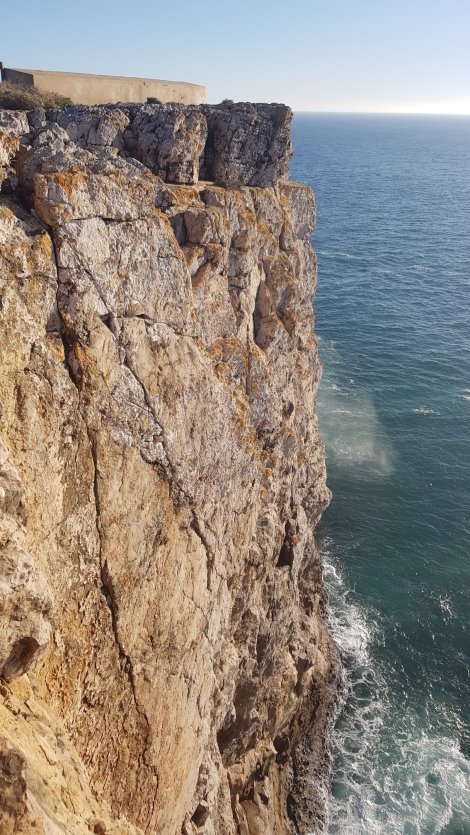 Pleasure Bound felt VERY tough for 6b (I had a couple of rests) but is a very good line.

Absolutely pooped, we called it a day, and wandered back along the west of the peninsula with great views of where we’d just been climbing 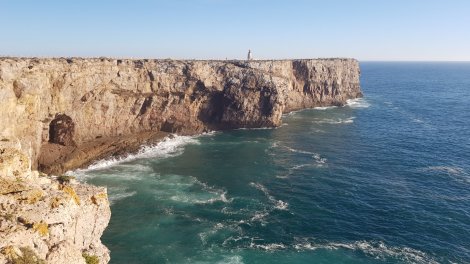