Moixent is a pretty little village, just off the A35 west of Vallada. The rocky gorge of the Barranc de la Fos is just north of the village and barely a kilometer from the autovia, but is a surprisingly wild and tranquil spot (apart from the occasional timber wagon). North facing, but surprisingly sheltered, it seemed worth checking out for a short visit on a hot but breezy day. 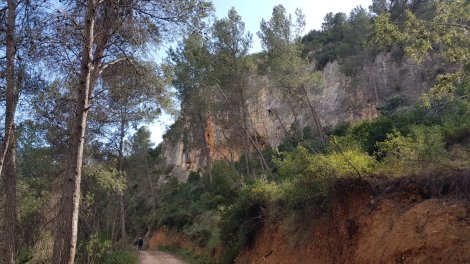 You park here: N 38.882, W 0.7688 and then it’s 500m along the dirt road until you see the first sector of crag (New Zealand – the other, La Bastida, is bird banned until July) immediately above the road on the left hand side. It should be 2mins from here, but an obstacle course of recently fallen trees adds a bit of extra hassle.

Once at the crag you find a couple of dozen routes, mostly 6bs & cs on the wings and a few 7b/cs in the central cave. Not too much evidence of traffic. 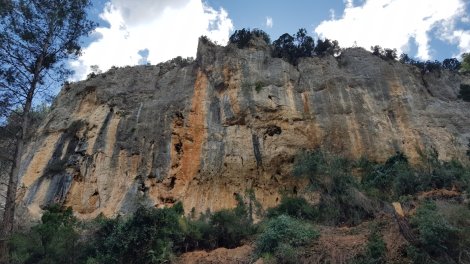 We kicked off with Meg, 6b, which proved to be a bit of a frightener – 4 bolts in 15m, with the first clippable from the ground, meant a potential ground-fall (or very near miss) if you fluffed the 4th clip!

The left of the cave is dominated by a striking orange streak, taken by Hungi 6c+/7a. It screams out “climb me!” and seemed to have a better share of bolts, so I jumped on. Fun moves yarding between mostly big holes somewhat left of the bolts (it’d be a lot harder going direct). Here’s a German lad on the 6c to the left, Lindsay, with the orange streak in the foreground: 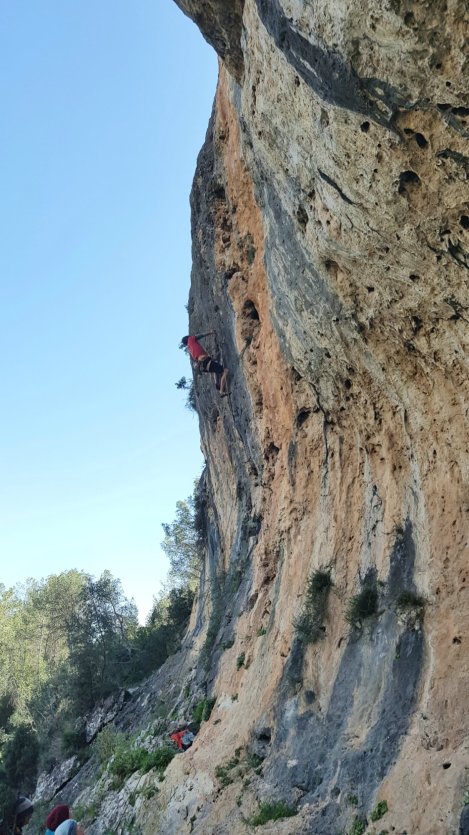 … and another shot with the line visible on the right:

Left again is the crag’s “easiest” line and only 6a+, Mount Cook, which provided another enjoyable if mildly harrowing experience. Spaced bolting again, with slightly flaky rock but good, if spaced, holds.

We decided to call it a day at that stage and head north into Aragon to explore the Alto Mijares – whilst Barranc de la Fos is a handy stopover we probably won’t be rushing back for a return visit.