Wow – it’s barely a week ago (Friday 13th, not that I’m superstitious – or wasn’t!) that we were sitting in the kitchen at Finepark, Finestrat, with the Rucksack Club SunRock early-birds (Guy, Tony, George, Karen and Chris), savouring what we expected to be the first of many convivial team dinners. Helen and I had been at Castellets – handy, but only okay climbing… 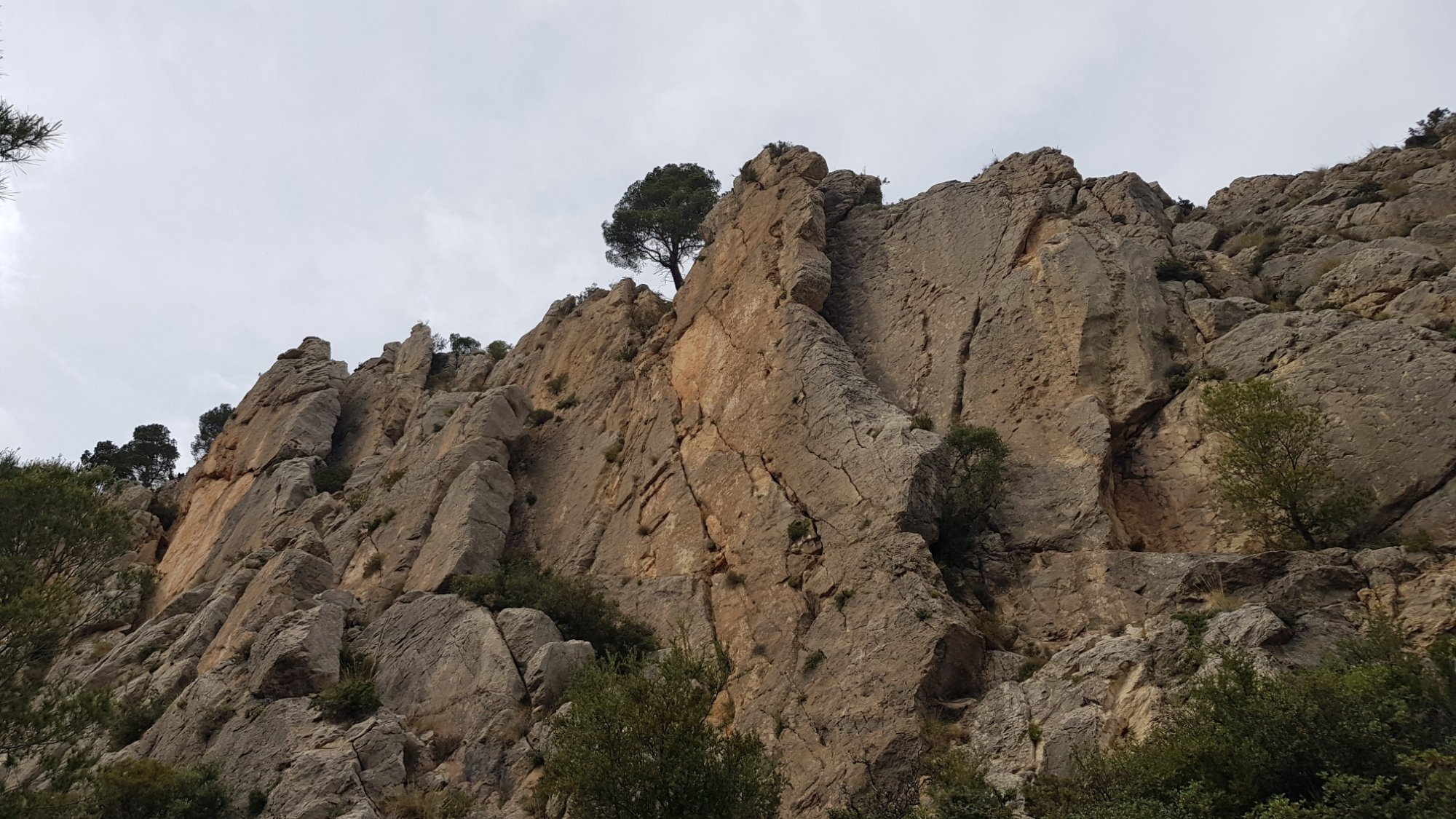 … But with fabulous views over Puig Campana.

The rest of the team had been at Abdet and delivered a similar “OK rather than awesome” verdict.

To put the CoronaVirus outbreak at that moment into context, there were hot-spots in Madrid and the Basque Country, with local restrictions (both about 500 km away) but barely a dozen cases in the whole of Valencia (fewer than in Manchester). Foreign Office advice was “business as usual”. We were pondering which restaurant to book for the following night, when the bulk of the 20 or so Rucksackers would be in town, when we got the first real hint that things were changing fast – all bars and restaurants throughout Spain were to close with immediate effect.
Unperturbed I made a mental shopping list for a huge paella instead, and we moved on to the much more pressing subject of which crag to go to the next day. Helen came up with the genius suggestion of Cuevas de Canelobre near Busot: a decent crag with a range of grades, handy for those arriving from Alicante airport and fairly safe to park with a car full of baggage.
My “quick nip to Lidl” the following morning turned out slower than planned – the place was absolutely rammed with shoppers stocking up,

and I drew a slightly critical glare from the elderly woman behind me in the queue who clearly assumed that my heaped trolley was the result of Brit panic-buying hysteria. I explained, in my broken Spanish, that I was cooking for “Veinte Amigos”. This explanation met with approval, and we settled down to jointly mock the toilet-roll hogging, facemask-wearing scare-mongers, whilst we queued patiently.
Cramming the booze lake and food mountain into the truck I set off back to the ranch, and then onwards to the crag. 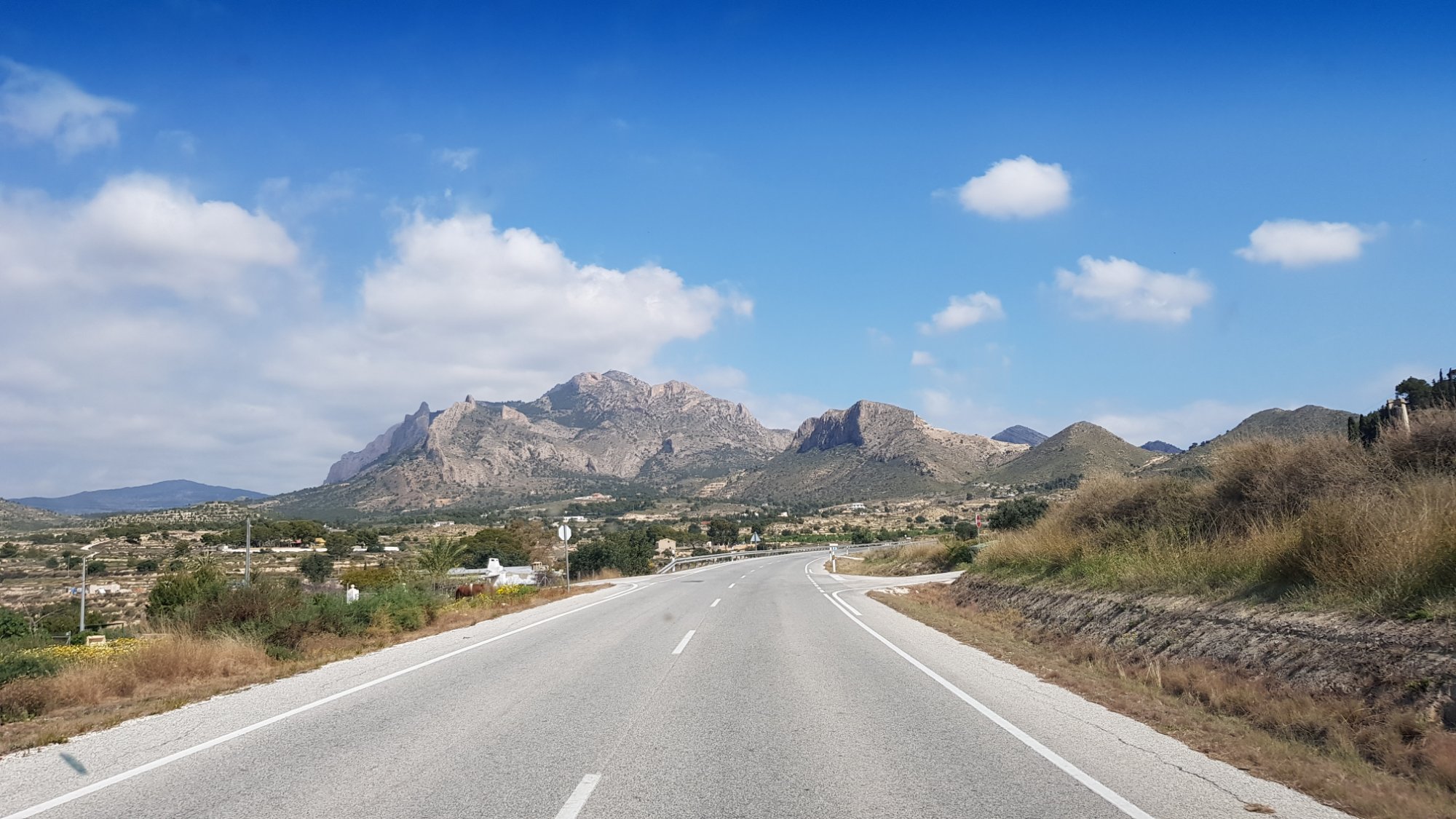 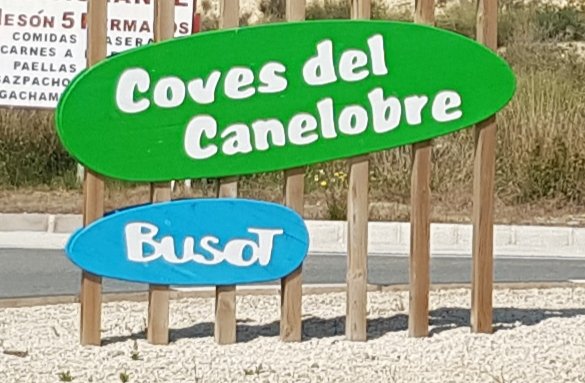 … as well as the rather less well known crag which is immediately above the parking for the cave.
The next clue that things were going pear-shaped was the notice on the gate:

… and the gun-toting Guardia Civil officer there to add further discouragement. Happily she drove off shortly afterwards and we managed to convince ourselves that it was only the show caves that were banned, and we caught up with the rest of the team who were already enjoying the unpolished, slabby climbing on offer. 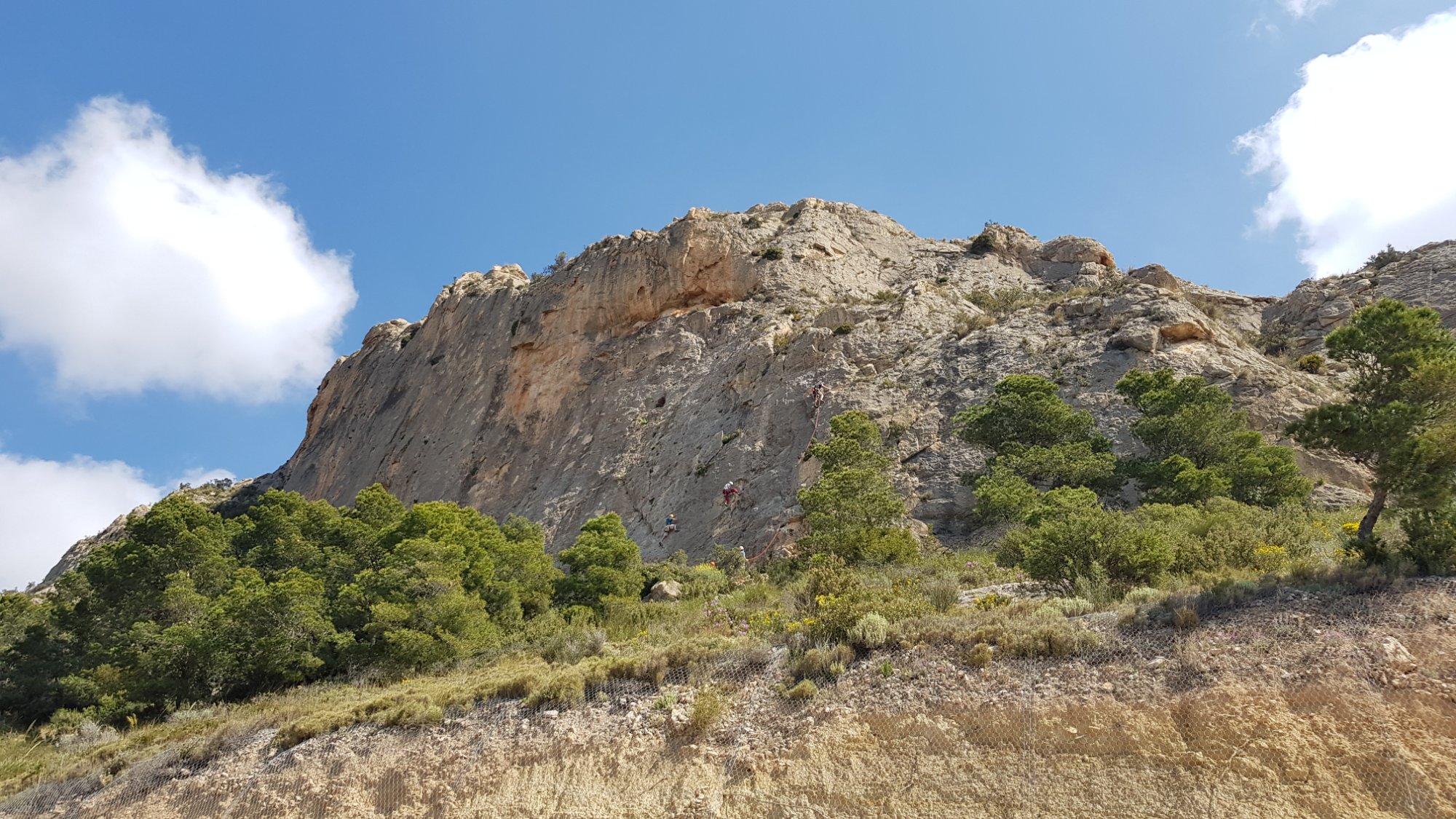 Here’s Guy on one of the 6as on the right hand side.

The climbing was enjoyable, the temperatures toasty and the outlook idyllic…

… but it was pretty hard to tear yourself away from the rolling newsfeed on the phone (the Internet is a blessing and a curse). By mid afternoon, UK flights were turning back, and the Spanish Government had announced a nationwide lock down to start from 8am on Monday morning (about 36 hrs away).
It was staggering to contemplate quite how fast the situation had deteriorated in just 24 hrs as we tucked into our paella (now joined by John, Ian and Mark, but with the rest of the team having decided not to fly in what was increasingly looking like a smart move). Spirits remained high and talk turned to options for more local amusement (there’s a lump of rock on the hillside above the accommodation), covert cragging or the fact that there were worse places to be topping up the tan for a week. Of course the other line of thinking was how are we going to get home?
Airline call lines were on permanent hold music, their websites uninformative, and meanwhile the FCO guidance was still unchanged, somewhat lagging events! Helen and I were grappling with the logistics of driving home with the prospect of having to circumnavigate possible quarantined areas in Catalunya or the Basque Country, or worse still being turned back at the French border (Germany and Denmark had already closed their borders). With heavy hearts we decided to head north first thing, and try to get to France before the ban came into effect.
With an “Adios” and “Hasta la vista” we were heading up the A7 on almost deserted roads apart from the continuous steady stream of large white northern-European motorhomes. You could almost hear the David Attenborough commentary on this bizarre migration of these huge lumbering beasts, back from their over-wintering grounds. You could quickly tick off the full set in number plate I-Spy: D, F, B, NL, S, N, FIN and of course GB.

The only minor scare on the journey was being filtered off the autovia to pass through a check-point with machine-gun toting military staring through the window then thankfully waving us on (they were clearly testing the deployment of the “good hard stare” CV19 test!) By late afternoon we were speeding across the French border at 110kph and soon after we were settling on to a campsite. By the time Justin and Chris caught up with us, the place was nearly filled to the gunnels as the wave of vans broke across the south of France.
Life seemed to be very much carrying on as normal the next morning, in contrast to the hiatus in Spain, but we decided to press on northwards to be within a day’s  drive of the channel should things deteriorate. As we sped through the Massif Central, rumours of a nationwide lock down started to appear on the web, ahead of an 8pm Presidential announcement, denied soon after by Macron as “Fake News”. Watching the live-stream that evening it was immediately clear that it was the denial that was the fake news – France would be in lock down from noon the next day. A quick search of the Eurotunnel website and some Google Maps calculations suggested we could be on the 6:50am train if we drove through the night (routing to give Paris a wide birth in case it all kicked off there).
Fast forward 18 hours and we were pulling into the drive at home, less than 72 hours after our sunny butty break at the foot of the crag at Busot, and having driven a couple of thousand km in the last 30 hours with just a couple of hours kip snatched in a layby. That wasn’t how SunRock 2020 was supposed to pan out!
Fast forward another few days and the whole team is home. Chris, Ian, Mark and John managed to beat us back to Blighty, with Guy, Tony, George and Karen being the last to escape, almost a week after our cragging at Las Cuevas. Welcome home!
Plans for SunRock 2021 are clearly on hold and it will be interesting (and perhaps a bit scary) to see how the world will have changed by this time next year. It’s a consolation that there will still be plenty of Sun and Rock out there – Fingers crossed that we’ll be back in a position to be able to enjoy it!