Blautal is another extensive area of crags in southern Germany, in the Schwabisch Alps, near Ulm. Despite the name, it’s neither blue nor very obviously a valley, with rolling green countryside punctuated by numerous pinnacles, towers and spires poking out of woodland or decorating the hillside. Think Dovedale on a much grander scale, with features like Tissington Spires and Ilam Rock around every corner. The epicentre is the town of Blaubeuren, where the crags spill over into the urban environment and there are incongruous monoliths in the middle of residential streets.

We sampled a couple of the crags: Peilerturm is an impressive 30m cone of limestone with a dozen routes arrayed on three sides. We did a couple of classic link-ups to get to the summit: Ausstiegsplatte 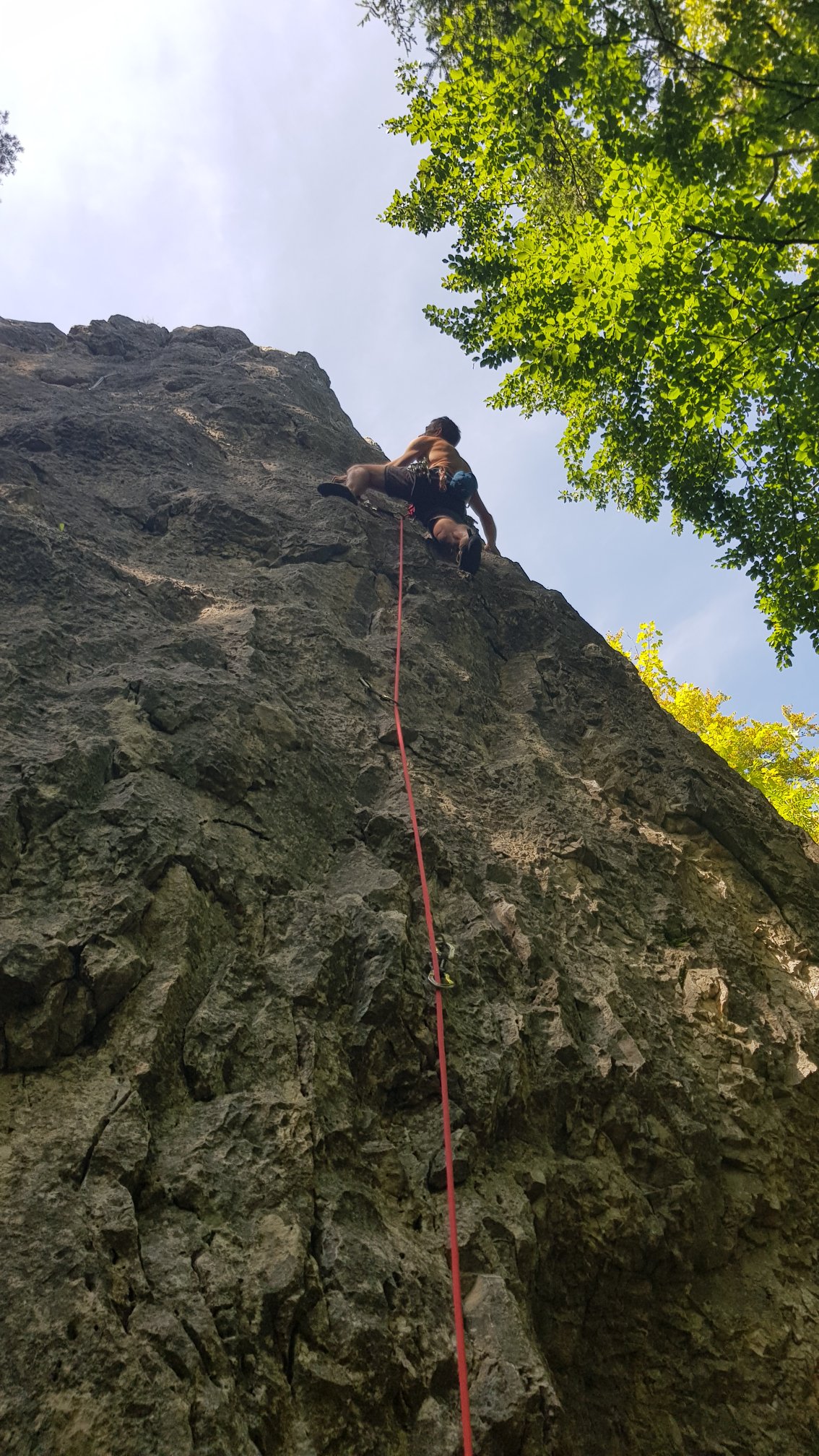 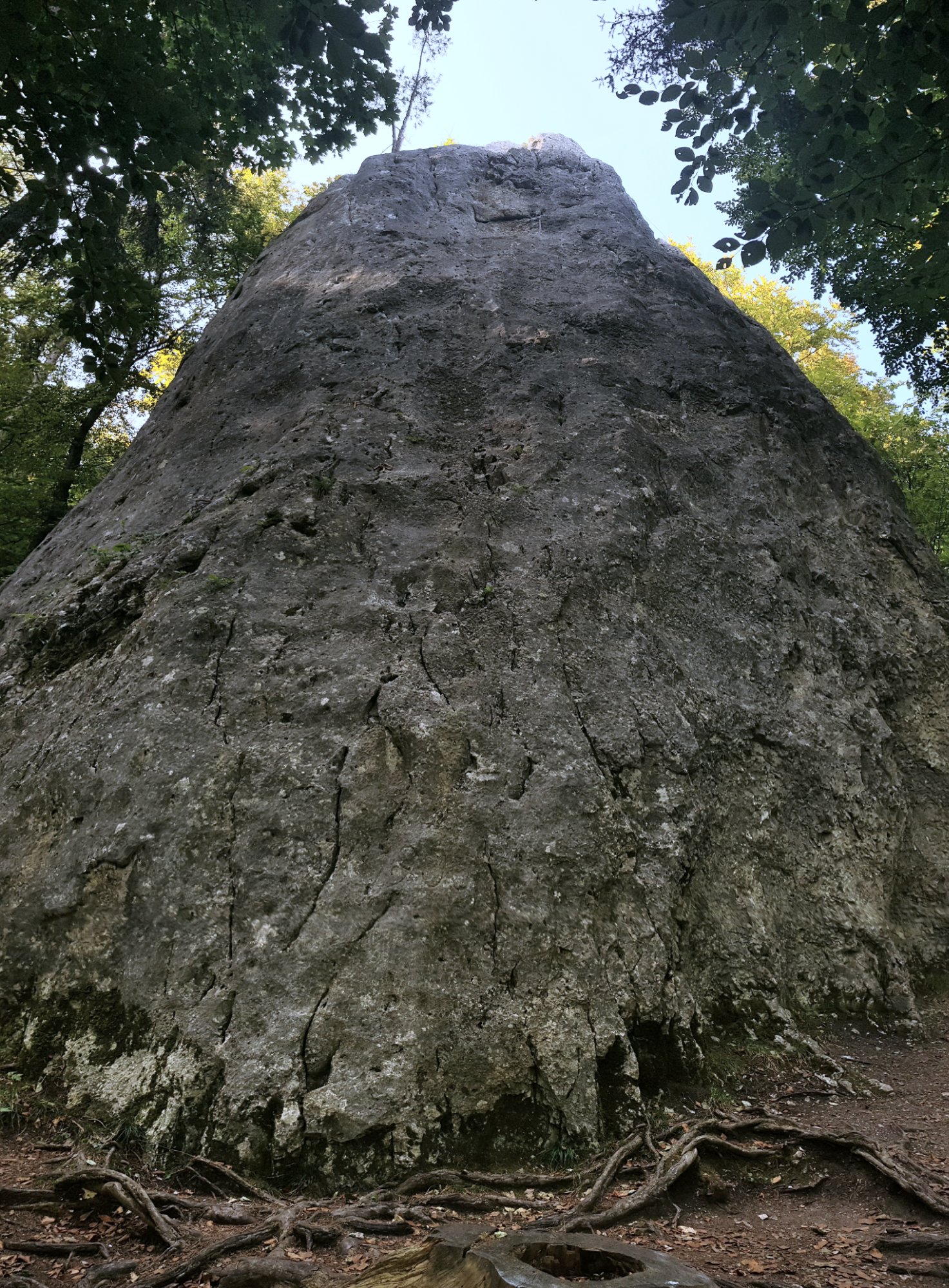 The climbing is also reminiscent of Dovedale, with somewhat over-travelled (though much more solid!) rock and plenty of pockets (many with in situ threads), but supplemented by a token smattering of bolts. Here’s another shot of a team on the IV+ classic Karles Einsteig. 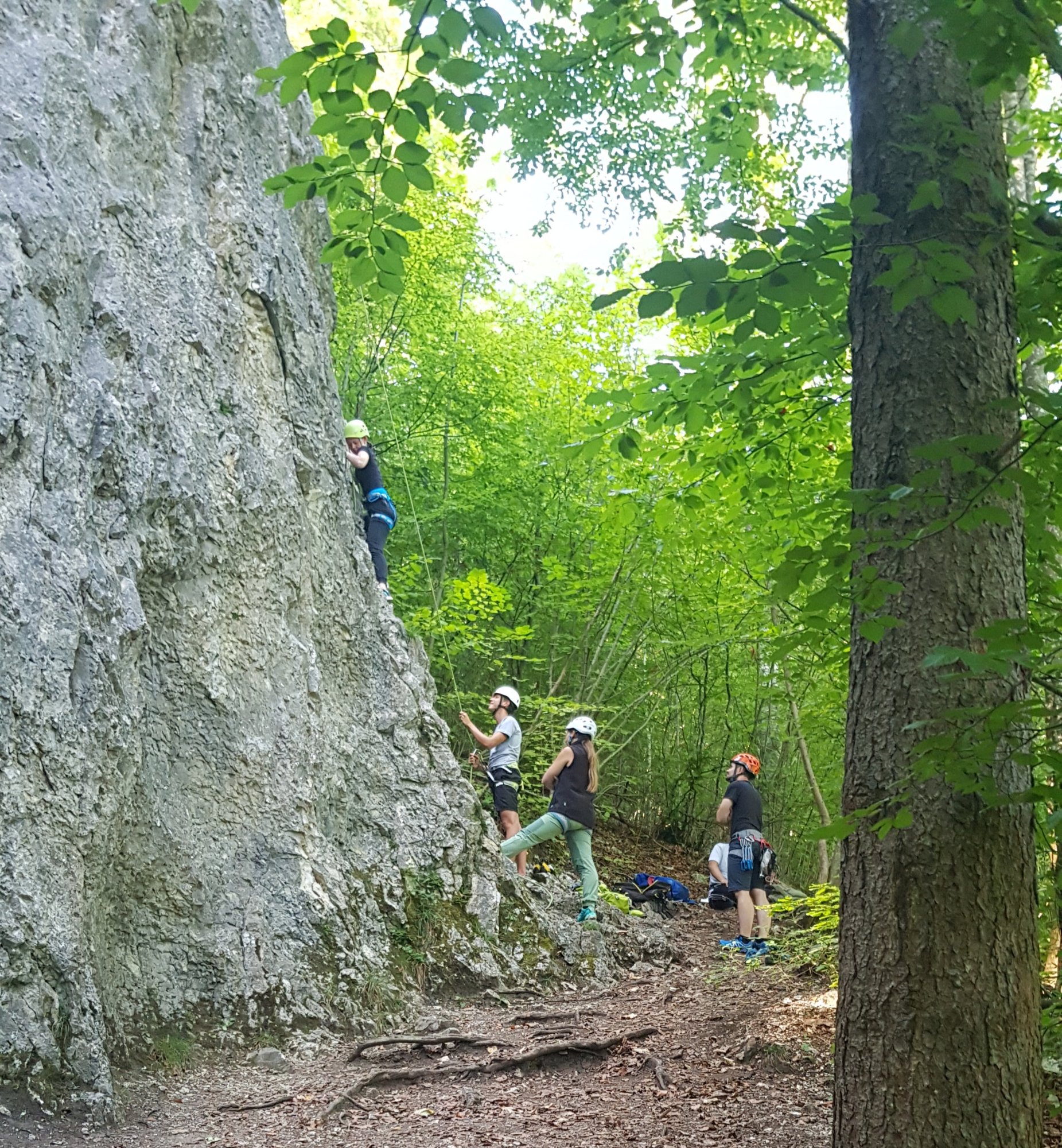 Just over the river is Bischof, and a  slightly cursory look at the guidebook suggested it was this fairytale rock formation immediately above the parking area.

Closer inspection revealed this area to be banned for conservation reasons,

and the actual Bischof crag to be another 10mins horizontal stroll along the well-made tourist path. Here it is poking out of the greenery: 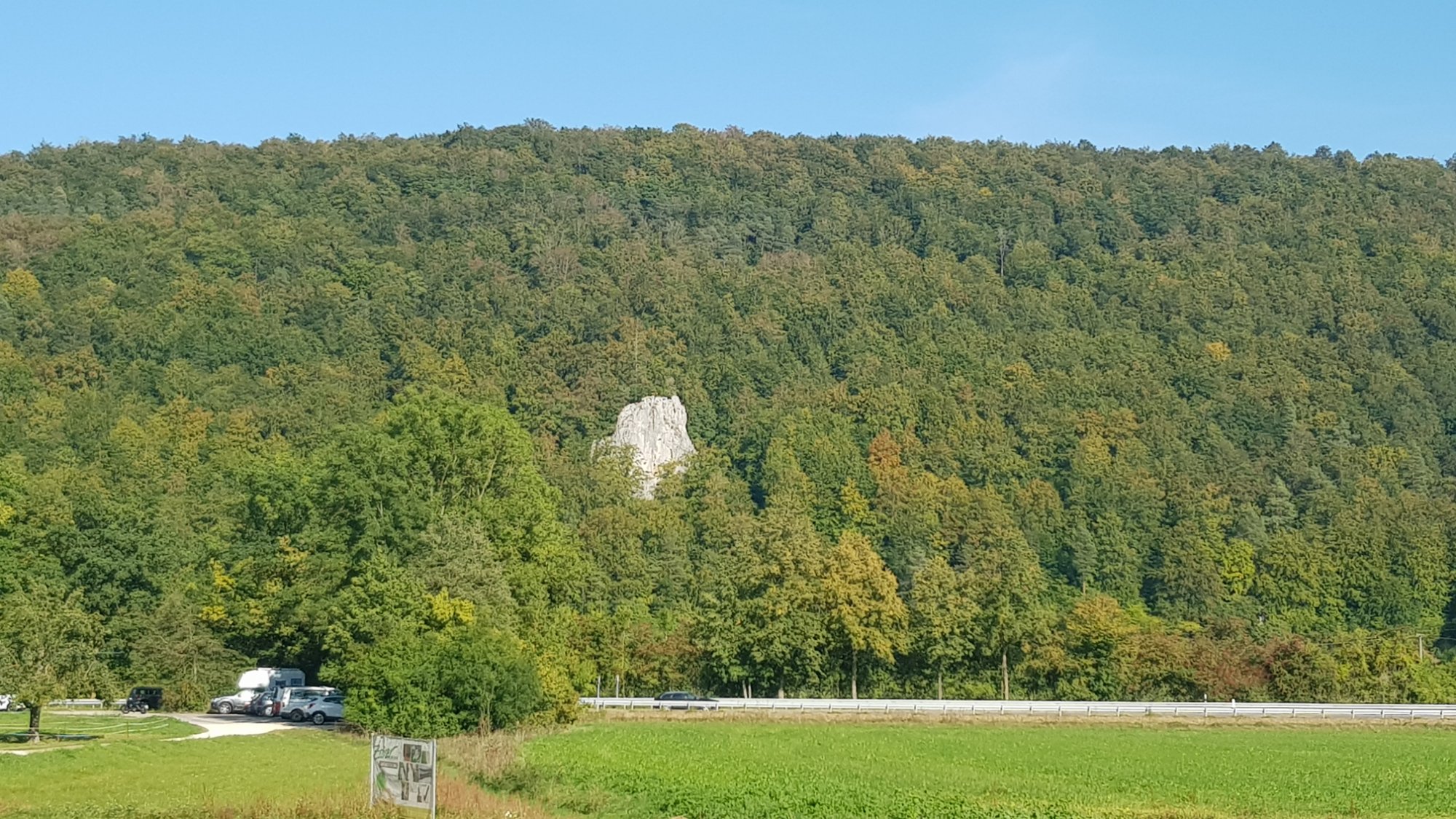 Against my better judgement I was talked into the wide corner fissure of Il Risso as a warm-up. 30m of sweaty polished thread-protected cursing later, I was definitely warm!

Further right, a couple of newly bolted routes (at least since our guide) held the prospect of better gear but were still a bit slippery! 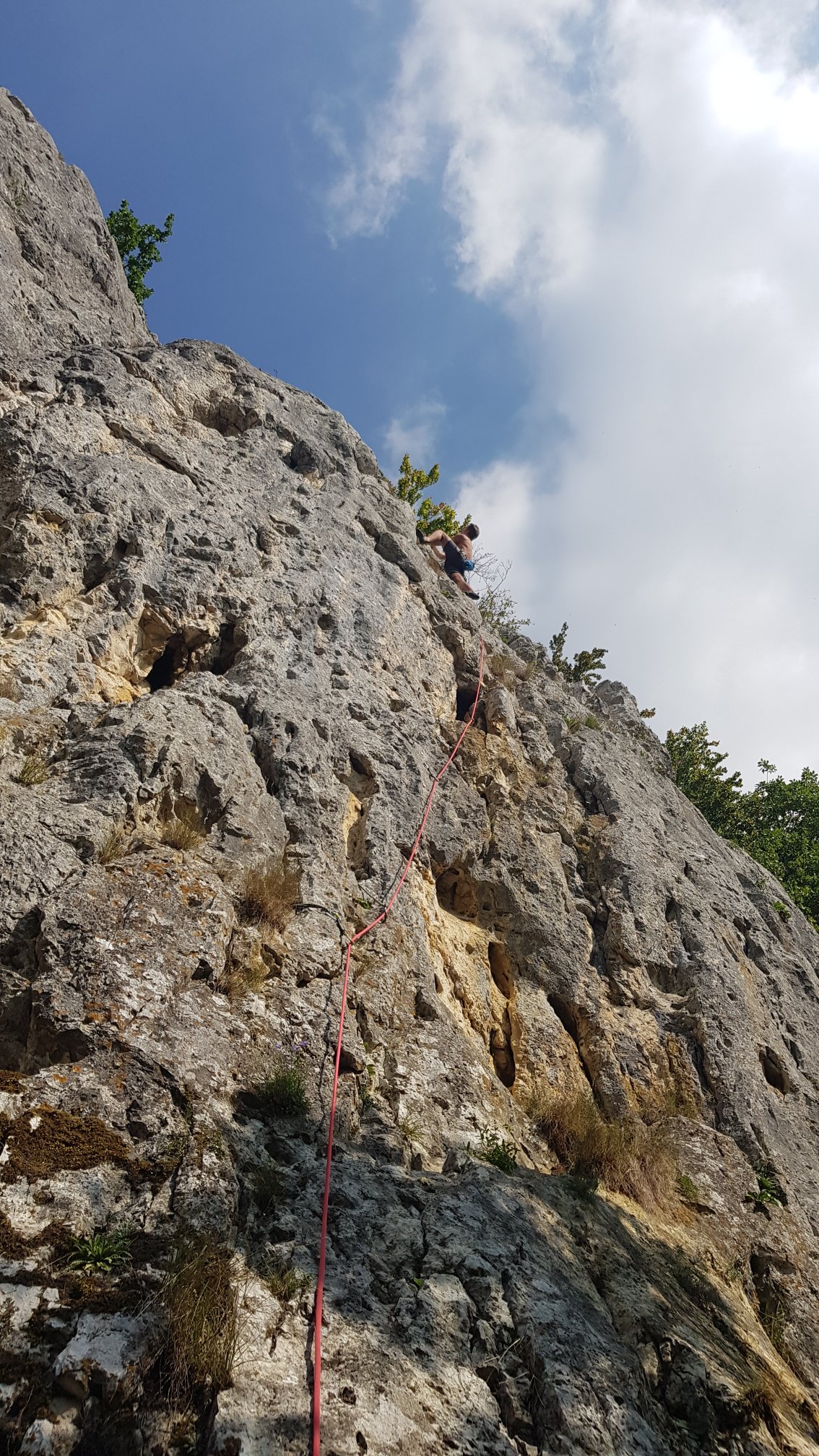 Apart from the climbing, Blautal’s other claim to fame is being home to a famous Abbey and the source of the River Blau, which burbles from a spring into this gorgeous blue pool around the back of the Abbey, before joining the Danube a few tens of km downstream, and ultimately spilling into the Black Sea. 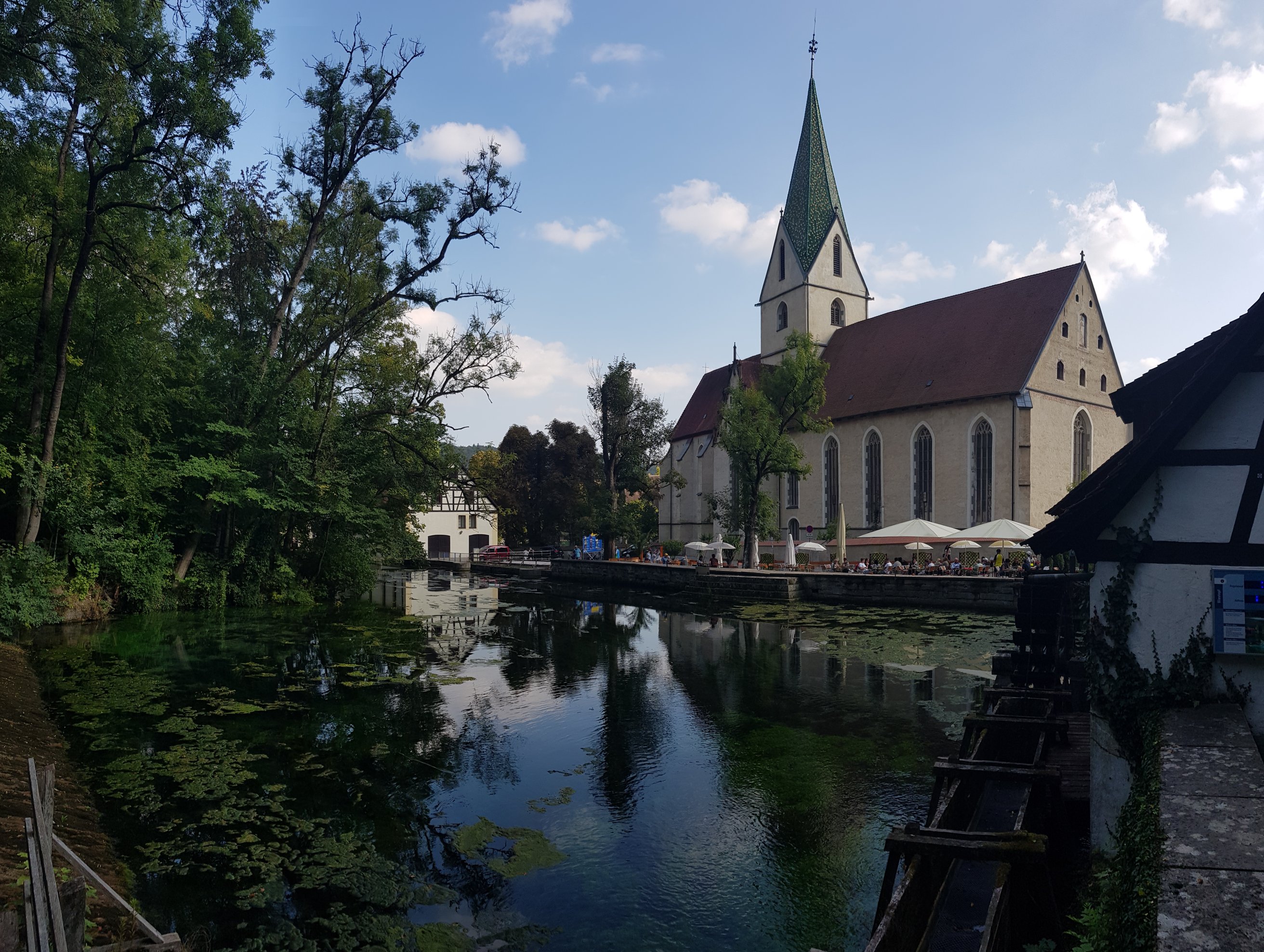