Tuesday’s forecast shone like a beacon in an otherwise grim week, and Paul was full of his reliable enthusiasm to make the most of it. As the resident Lakes guru I entrusted the choice of venue to him and he came up with Eagle Crag, Grizedale….. A quick look at UKC brought a few mentions of damp and greenness, plus an hour and a half approach. I was ready for a mutiny until Paul suggested mountain biking the first chunk and expressed complete confidence in the Easterly aspect and recent dry spell.

Sure enough, he was right! A 20 minute MTB blast up the bridleway and a further 15 mins on foot had us there in record time, to be greeted by dry rock, sunshine and a fair few clean looking lines. All very compact though, with grades like E2 5a indicating a general lack of protection! 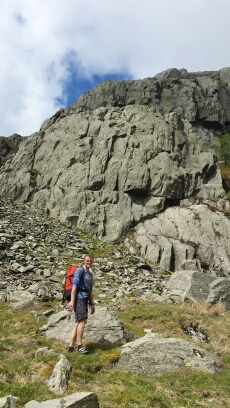 We warmed up on Morning Wall, with a spicy move to gain a start on the route followed by slabby runout climbing.

Then the aforementioned E2 Soliloquy and appropriately named Grand Day Out.

And Nexus on the upper tier.