A couple of hairpins before the Nifada parking you turn a bend and are confronted by the sight of the Elona Monastery perched spectacularly against the red rock walls high above the gorge. 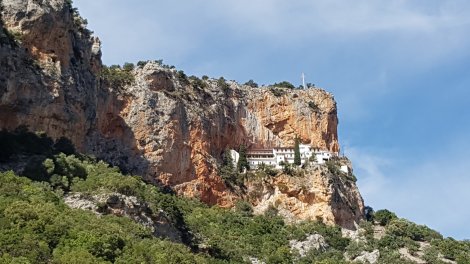 Another of Leonidio’s biggest attractions provides a further surprise around the next bend – Elona crag is perhaps the pick of all the sectors in the whole area.

The main crag only has a couple of routes under 7b, so we walked a little further up the hill to the upper tier. The Yaris guide dismisses these 20 or so routes as being  “not of the same quality” but that’s a pretty severe benchmark for comparison. Bibo, 6a+, takes an intimidating line up an impressive steep corner…

And White Rabbit is a fine, testingly steep 6a crack.

Having warmed up it was time to head down to the main event and some tufa wrestling. The brilliantly named Kneebaropolous is a “musical note-worthy” 7a up really sustained but never completely desperate tufa pipes. “A kneebar party on beautiful tufa columns” –  Betraying my upbringing, I found the occasional hand jam to be more helpful than knee bars – perhaps shouldn’t have worn shorts. Suffice to say it’s an absolutely outstanding route, and all very up-hill!

Here’s a few pics of Robert on it… 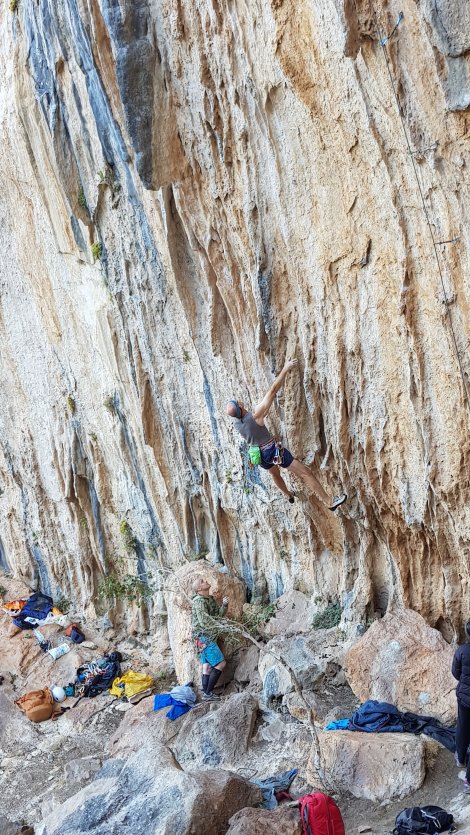 … and one of a strong French lass (who was warming down from nearly on sighting a 7c inbetween breastfeeding her tiny baby!) Just visible on the edge of the shade on the hanging arête beneath the cave in the middle of the shot.

Onto the other potentially doable route Paranyhida, 7a+, “A full body workout between double tufas”, according to the guidebook. They weren’t kidding! I made it to a decent bridged rest at around 2/3 height, having navigated the crux maneuver from a rattling tufa curtain on the right into a grey lumpy column on the left via a few horizontal drop-knee-bars. Decent, that is, if you are comfortable doing the splits on massively overhanging rock… I started to think that I might have the route in the bag, udging higher in the bridge, but then a loss of concentration and a foot slip saw me heading downward at speed.

Oh well, must be beer o’clock. Which we took at a fabulous restaurant about 8km down the coast – Myrtoon comes top of the TripAdvisor rankings locally and for once I wouldn’t disagree. Great spot on the beach with views north to the crags and our campsite, great food and service and a real bargain.