The spa resort of Baile Herculane is probably the finest climbing area in Romania – Petzl presumably thought so, as it featured on their last RocTrip. We arrived late and awoke to grey skies in a scruffy van parking area behind a gasthof, but headed up the Cerna valley to check out the climbing (causing some consternation, as we’d forgotten to unplug the electricity cable and went a couple of km trailing a 25m orange string in our wake – looking like a failed prototype of an ill-conceived electric campervan!)

We’d vaguely imagined BH as a Romanian version of Matlock Bath, so the scale of the place took us by surprise – there are 20 storey hotels! Thermal resorts really are big business in this part of the world! Driving further through town we passed huge, ornate bath houses and grandiose hotels from a bygone era – many derelict and in decay, but a few refurbished to former glories. 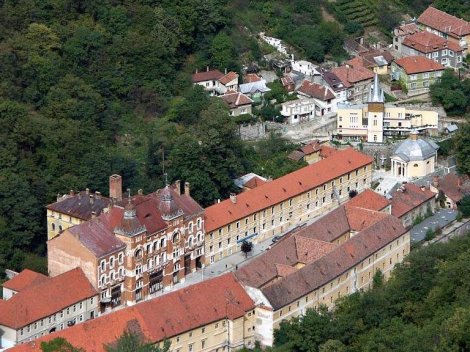 Passing out of the town you travel up the Cerna valley, which is protected as a National Park, stunning in its autumn colours despite the clag, with impressive limestone buttresses high on either side. We dropped into the visitors centre and surprised the attendants – we’re definitely out of the season! Along the roadside are occasional clumps of parked vehicles with dressing gown clad people huddling to change – presumably after taking the waters at an emerging hot spring. We weren’t tempted!

The forecast rain still hadn’t arrived and it was about 12C, so we felt obliged to at least sample the climbing. Picking the sector closest to the road (and the town) we plugged the GPS coordinates into Google maps and set off for Sector Roman. This took us along a pretty riverbank and then somewhat alarmingly UNDERNEATH one of the aforementioned 20 storey hotels (this is a postcard) … 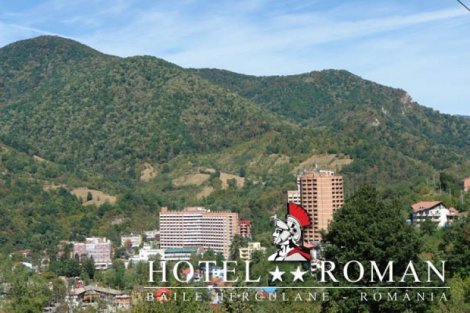 before pulling in about 50m further on at one of the most bizarre crag parking spots I’ve ever encountered. 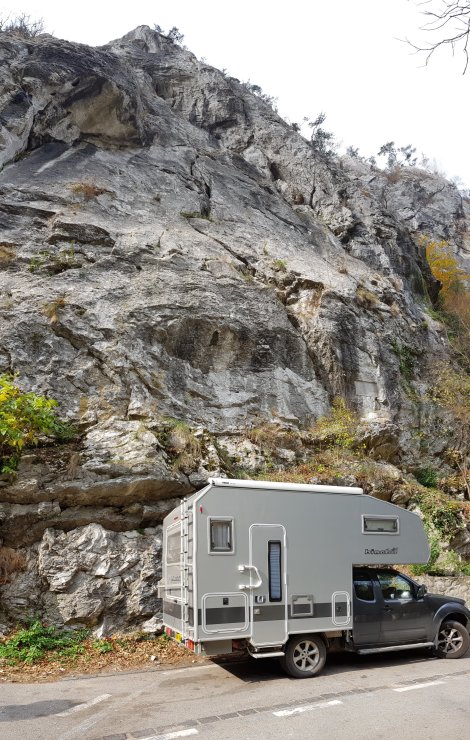 About a dozen bolted lines, most looking a bit rusty so I picked an eight (VIII) which had clearly been rebolted and had a go. Initial impressions of Matlock resurfaced as the rock had a definite High Tor feel to it. The climbing was good rather than great, with a very stiff move through a bulge that I cheated past (fingers 7a warm up on a freezing damp day being the perfect recipe for a tendon injury!) More memorable than the climbing was the parade of curious onlookers from the hotel baths, decked out in bright pink and blue fluffy toweling robes. Then again, they probably thought I looked daft and out of place too!

Having ticked our YECTOYD (You Either Climbed Today Or You Didn’t) we got back on the road, conscious that we hadn’t really done the cragging justice – there looked to be plenty of rock in much more attractive locations to go at – one to maybe come back for if we’re passing through…

Another couple of hours of country roads through villages and attractive autumnal scenery brought us to the motorway and then another few hours including an uneventful border crossing found us at a much swankier campsite in yet another spa town, this time in Hungary.