After his exertions on Shark Attack Jake decided on a rest day (sensible chap – don’t know where he gets it from), but offered to undertake belay duty for the day. I fancied a change of scene, so we made the hour’s drive to Marbella and the newish crag of Puerto Rico.

It’s in a great spot, perched high above Marbella up a wooded valley, with a fab outlook.

About 70 routes in all, mostly 6a to 7a and around 20m long on tufa drenched orange  caves or pocketed grey slabs with generally good holds and very sturdy looking bolts. Very little polish, though some of the routes are a little crumbly in places. The routes are best accessed by walking up the concrete covered water pipe (in the picture above) and gaining the half height ledge from the right. This leads fairly easily beneath all the routes.

Puerto Rico Espanol was a fun 6b warm up 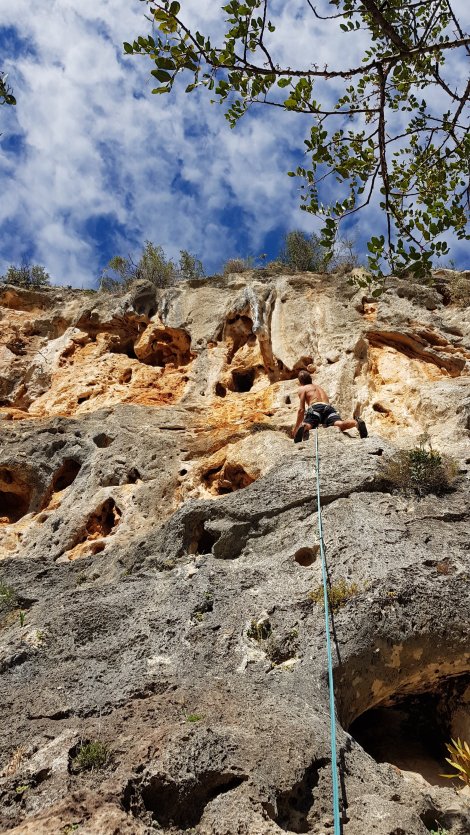 Timmyyy a fairly straight forward 6c+ with a very friable top out, worth giving a miss. L’Academia a very good 7a+ with a hard (too hard for me) final move

… and Negra Patatera an excellent 7a which packed a punch in the last 20ft between two tufa runnels with barely a hold between them (by which time the weather had closed in and I whisked my belayer away before he went on strike!)

A really good option if you want a break from the Chorro scene and a different style of climbing away from the crowds. Get there soon as it will be in the new Rockfax next year…

If you fancy going, there’s a really handy topo here http://www.cartowall.com/es/topo/vista-general-de-puerto-rico and the same site has up to date info on all the Malaga region crags.