Heading towards Granada we decided to recce a promising looking crag at Velex Rubio – just off the motorway and the perfect spot to break the journey… Ah, the wonders of the Internet! Directions and topo safely downloaded, we drove through the underpass (noting the traversing training wall that some enterprising locals have constructed in it) and into the (dry!) riverbed in search of Penyon de Pio… Without disrespecting the efforts of the crag developers, and recognising that it was blowing a hoolie on this north facing crag, I can only report that we decided to look elsewhere… 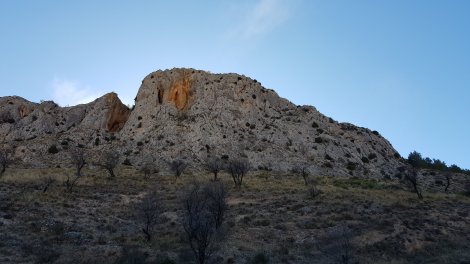 … Pressing on to Granada, we arrived in time for a pleasant afternoon at Alfacar. Plenty of locals out also enjoying the balmy Sunday sunshine – it was high teens despite being around 1,400m, (a change from last year when we woke to ice on the inside of the windows!)  and we got a few decent routes under our belts on sector Nicho including Pan de Alfacar, 6a, which would have been equally at home as a 3* E1/2 in the Peak

… and some newer 6as & bs on the rock a bit further left including Cuidado con el Viecho.

Then a few km down to Camping Alto de las Vinuelas (about 1100m) for a sundowner with stupendous views over the shimmering Sierra Nevada.