Cascais, a seaside town just north of Lisbon, is where sports climbing started in Portugal about 50 years ago, and it couldn’t be much more convenient! The climbing is approached down a stone staircase (passing under a helpful sign so you know you’re in the right place)

… and the first route is a minute from the car. There are about 60 routes, generally well bolted with stainless staples, and each with a name and grade painted at the bottom.

Access to the rest of the routes is fairly straightforward, though those to the right require a bit of boulder hopping, and though the heaving swell is very much in evidence just a few feet below, it’s kept at bay for the most part by huge blocks. 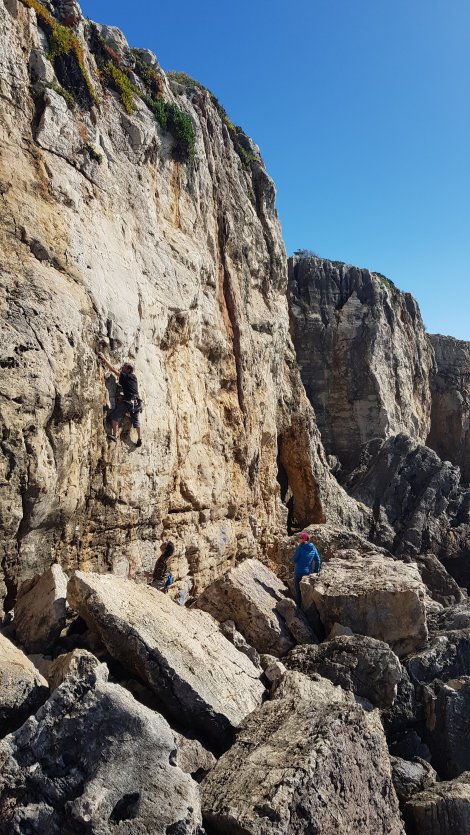 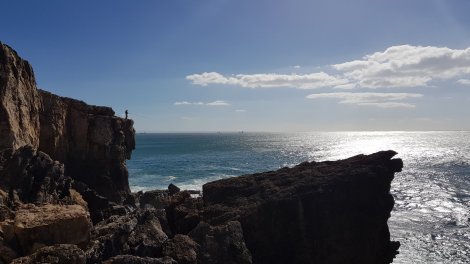 As seacliff climbing goes, it couldn’t really be handier – like a decaff version of St Govan’s (though only about half the height), and you are very much aware of the Atlantic raging away with the regular booming of the waves providing a fitting soundtrack.

The climbing is pretty good too, with a great variety of routes on some heavily sculpted hard yellow limestone. Unsurprisingly, some of the routes are quite polished and this isn’t helped by the soapy seacliff effect (and sweaty mitts – it’s a sheltered oven even though it was blowing a hoolie and 12C on top); but it doesn’t detract too much. There was also a really nice “weekend vibe” with plenty of locals out enjoying the weather and keen to show us what goes where.

The pick of the routes we did was probably  Tubo, 6a, which takes a steep  runnel before launching up a subterranean tube that feels like a missile silo.

Next-door is the equally fun Doce, great fun at only IV+

At the far right hand end is Gaivota Esoterica, 6a

and Descanso dos Guerrerios, 6C, is a short but very steep trip up the overhanging under side of a huge boulder.

We finished on Via Latea, halfway back up the steps – easy for 6C+ (or even 7a in the  Jingo Wobbly guide).

Just ten minutes back up the coast road to our campsite, but we stopped off to admire the huge rollers coming into shore, and the wild coastline heading up to Cabo da Roca, a few miles north and the most westerly point in mainland Europe. Surf’s up!