We’ve had a couple of complaints of too many sunny pictures recently, given the weather back in Blighty. At RockAroundTheWorld we’re always keen to please, so today’s post features scenes of rain and climbing in the drizzle 🙂

A couple of dodgy days in the forecast prompted our usual response and we upped camp and started driving. A couple of hours north are a further bunch of crags between Leiria and Coimbra, of which Reguengo is the most southerly. On the way we had a brief stop at the town of Fatima. This is the Portuguese equivalent of Santiago or Lourdes; with Pilgrims travelling from far and wide on the anniversary of the apparition of an angel to three shepherd children in 1917. The town is extraordinary, not so much for the pretty basilica which has since been erected, but for the 14 huge carparks that circle it, linked by a ring road, to cope with the traffic. There are up to a million visitors during the annual pilgrimage!

We settled in for a dark and stormy night overlooking a spectacular beach near Nazare, and were lulled to sleep by the sound of thundering rollers and the pitted patter of rain on the roof. Still dull and drizzling next morning, but quite a view from the breakfast table. 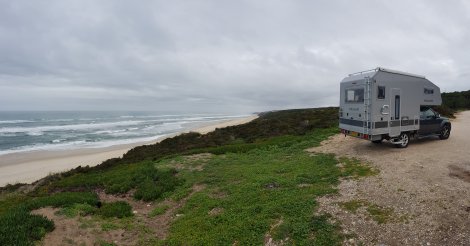 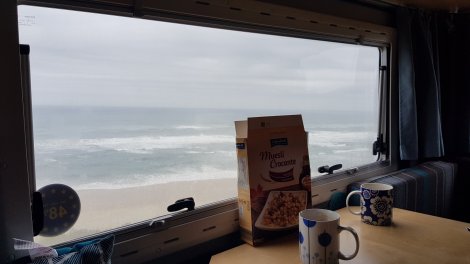 The problem with two days of rain is that if you just keep driving you run out of road and end up home! Better go and take a look at the crag…

The guidebook describes Reguengo as “not as spectacular as some of the more famous climbing gorges, such as Verdon”. This is not false modesty!

The routes are scattered along either side of a rocky valley about a mile in length, featuring sculpted caves alternating with slabby walls. It’s quite an enchanting spot but the routes are a bit stumpy (20m max and more typically about 12m) and therefore bouldery.

However, there are a few ever-dry caves to shelter or even climb in (the largest of which has a strange stone plinth at the back, that I initially mistook for an altar but turned out to be a barbecue pit!) 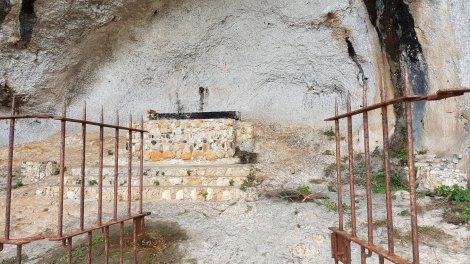 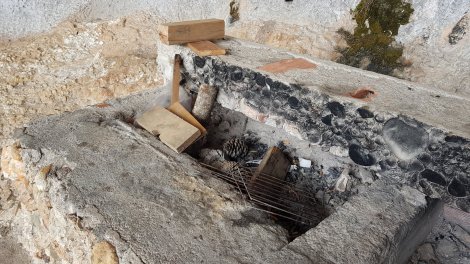 ​
We managed to squeeze in four routes in a lull in the drizzle – all quite fun and newly re-bolted by the looks of it, though a bit polished in places. All highly convenient – only a couple of minutes from the van and even with a flight of steps to access the upper tier. We’ll certainly drop it in again next time we’re passing.