Normal service has been resumed – warning, this post may include pictures of sunshine!

Poios is a really pretty little village in the hinterland, about 45mins from the coast, and lies at one end of the Vale de Poios gorge, which is a nature reserve with an attractive path running through it.

On either side are a series of crags, of which the south facing ones held most interest in February. Of these, the most impressive is Micro Ondas (Microwave) which is obviously a suntrap. 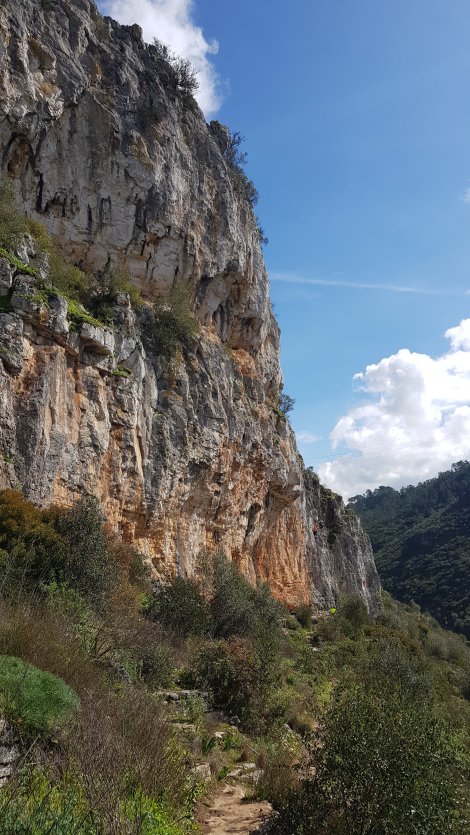 Generally very steep, orange rock with slots and pockets and horizontal edges gives pumpy and athletic climbing – you certainly feel like you’ve had a workout even though they’re 25m at most. Some fun 5s and 6as at the right hand end are good value, including Paulo below

And the crack system up to and round the right hand end of the major overhang gives a very good 6c, Com esta maquina e mei with a very tough finish.

A couple of locals (okay, they were from Lisbon)  let me use their clips on this then suggested I should have a go at O Trator o Miudo e a Velha, a 7a a bit further left. Steep layback moves to a poor rest under a roof followed by a long reach out and right to surmount it…  I just popped off the finishing jug, but it was so good that (unusually for me) I pulled the rope and did it on the redpoint.