This is a great set of crags a few km from Ganges, about 50km north of Montpellier and the Med. The area’s main claim to fame is the show cave of Grotte de Demoiselle, and there’s climbing either side of the parking conveniently supplied for this (though accessed by a slightly annoying one-way zigzagging road – be careful not to overshoot!) There are further sectors scattered along the river valley and well over 500 routes. Whilst some of these date from the ’70s there’s plenty of ongoing development (we bought a new guide in 2014 and there’s already a newer one out.

… and Bartas Killer – here’s Helen pulling through the initial overhang. 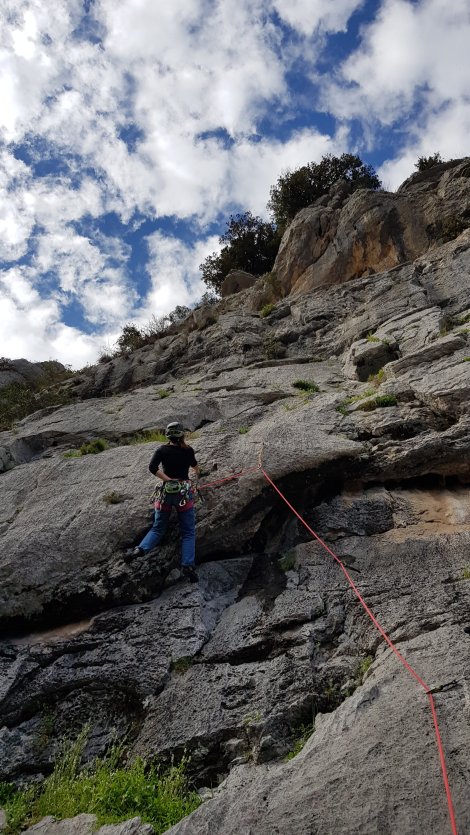 After a night at the charming Camping Grillons (municipal and only 13 euro) and a very good dinner at the neighboring restaurant we returned refreshed and refuelled for day 2.

Parking right at the end of the one way system you can access another fine bunch of sectors, including L’Ombre d’un Doute and Les Ailes du Desir where we climbed. These are west facing walls up to 40m high and offering a wide range of grades from V+ to 7c.

You also get a good view down from the somewhat airy half height ledge, onto the further sector of Lamentations 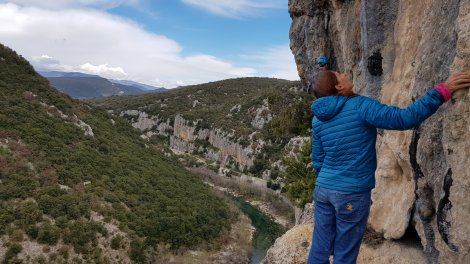 We warmed up on Jeudi Noir, a 35m 6a with a really tough start,

then followed up with Constat de Crise, also 6a, and also tough. We were then pointed at the classic La Tour de Carol, by a bunch of friendly locals from Montpellier – this was an outstanding 35m 6b with sustained climbing throughout but a noticeably trickier crux around 3/4 height – here’s a not quite so local lass from Lyon just approaching the crux.

Our Montpellier friends also recommended a new 7a just to the right (doesn’t feature in our topo – it’s the route just left of Constat de Crise). This turned out to be another good shout – easy slab before an obviously much thinner and steeper middle 10m on brutally tiny holds followed by a step left and the finish of the adjacent 6b+ (the route name of which is Bienvenu, meme aux Enfoires, photocopieurs du topos et emmerdeus de tous genres – you’ll have to look it up; it’s quite rude!) – a full 40m workout that doesn’t relent until the chain, and a fitting last route of the trip.

and passing the Cirque de Navacelle (another climbing destination to come back and explore on the recommendation of monsieur Montpellier – he’s been pretty reliable so far!)