With a couple of weeks of dry sunny weather behind us I was keen to make the most of the conditions to get up high in the Snowdonia hills… ignoring the fact that it had actually lashed it down the previous evening, so really I’d missed the boat. I met up with Stan and Neil at the cafe in Bethesda and was quickly talked out of Cloggy (good call, guys) and we settled on Suicide Wall instead.

All a bit murky, misty, moody and intimidating on approaching the Idwal Slabs (punctuated by a hunt for Stan’s hat which had somehow blown away)

Suicide Wall is another of those crags I’ve somehow managed to put off visiting – the name obviously doesn’t help, along with the reputation for huge runouts and limited gear. However, the original Route 1 is another un-ticked box on my Extreme Rock ticklist, and it was done in 1945 so “how hard can it be?”… “Quite hard!” it turns out.

The moves off the deck are really quite stiff (well worth 5c) and with limited gear (best option is to poke a thin sling over a tiny spike around 15ft and hope it doesn’t slip off), with damp pockets and drizzle not adding to the feeling of confidence.

Once established on the wall, the climbing eases and you even get a couple of decent bits of gear before you arrive at the halfway grassy ledge. After placing a poor cam behind a suspect spike you stride rightwards along the ledge for about 5m and fiddle something (tiny red camalot in my case) into a very thin horizontal crack.

Another couple of tricky moves in “do not fall off here…” territory lead to a rightwards slanting rail and the then to the first bomber placement on the pitch, which protects a final pull to a ledge and rattly ab point (if you trust the jammed block and old tat). Phew! I’ve got to say it was harder and bolder than I was expecting – amazing lead by Chris Preston in 1945!

It was Stan’s lead next and he decided to up the ante by having a go at Capital Punishment. This is even more committing, with a huge run-out climbing up a narrowing slab, where a slip would likely see you back on the ground – thankfully, the holds are really positive (though small)

and Stan made it to the sanctuary of some thin gear

before the technical crux up a shallow groove brings the relief of a bomber thread (and we could all start breathing again!) 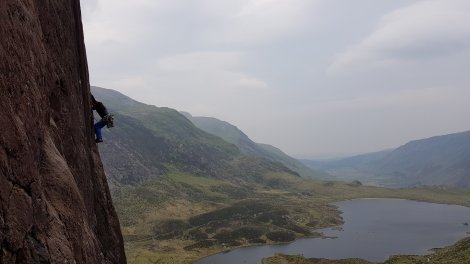 Steep climbing on unlikely pockets brings you to a ledge,

and then more fantastic moves on crozzles and holes (with the luxury of the occasional decent runner) gets you up to the same belay. 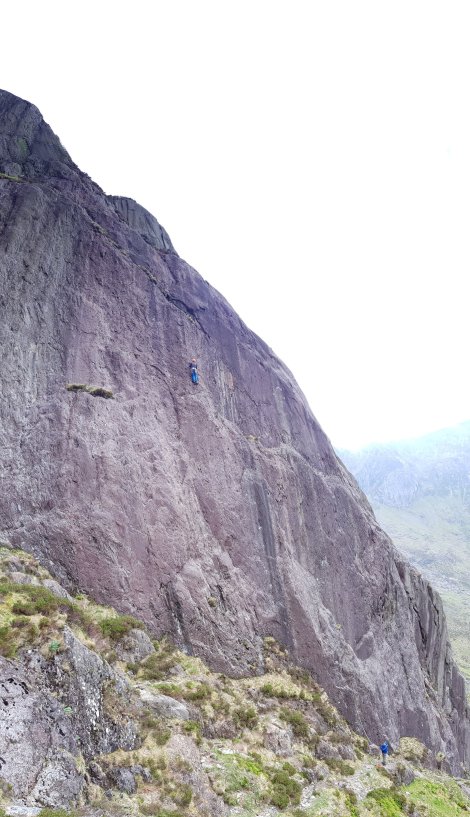 A truly audacious lead by Stan!

Rather than head back down, we plodded up to meet the standard descent route from the Slabs and reverse this to the foot of Holy Tree Wall and Rampart Corner, one of the few mid extremes in the area that Neil hasn’t done, so we let him do the honours. By now we’re bathed in the evening sunshine and the day is unrecognisable from earlier, with stunning views across the Ogwen Valley.

Grand day out and a good illustration of the UK trad grading system. All three routes had a technical grade (for the hardest individual move) of 5c but the E grades of E2, E3/4 and E1 respectively reflect the chances of doing yourself damage.

It all looked so much more benign heading down at the end of the day on the way to dinner at Beudy (suicide wall still in shade on the upper LHS of the cliff). 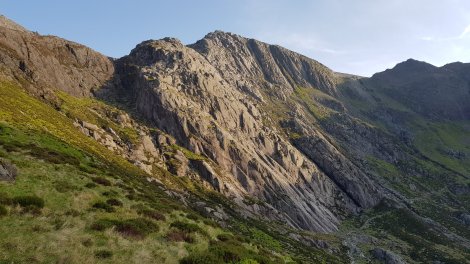