With the thermometer still showing 30 plus we pressed on northwards, but wanted to break the 6 hour drive to Ullapool. Glen Ogle looked like the perfect stopover – the A85 passes directly through the Glen, the walk-in is advertised as only 15 minutes (more on that later!) and there’s climbing on the North (shady) side 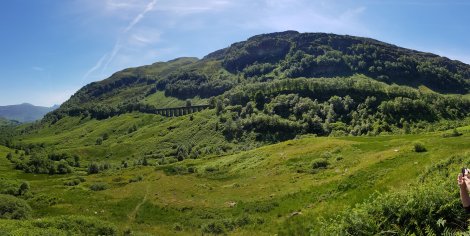 as well as the more popular suntrap across the road.

In its heyday this was Scotland’s most popular sports climbing area, but that was 20 years ago… Judging by the lack of obvious paths through the chest-high bracken, the shady side at least is somewhat out of fashion. We made the mistake of heading for the rightmost sectors – Cascade Wall and The Underworld. Short (but very steep!) routes with often rusty bolts and (on the latter at least) single bolt lower offs with decaying aluminium krabs. Also, being amongst trees, the beastly wee midges were starting to gather. We gritted our teeth and muttered the family moto “You either climbed today or you didn’t” and threw ourselves at the easiest route nearby – the “no star” Satan’s Slaves, 6a, fully lived down to its billing, one to avoid.

We decided to recce the rest of the crags on the way back to the car, which took us to The Diamond, which had in situ climbers and some decent looking routes. There were also no trees, a bit of a breeze and therefore no midges – We should have come here to start with.

One of the team turned out to be Matt who we’d met in Leonidio (where we also spent our time hiding from the sun!) He persuaded us that we really ought to do Metal Guru, 6c+, which turned out to be an outstanding (though tough!) route. Steep moves on crimps to a ledge, followed by easier progress to a tapering flakey crack in the overhanging headwall.

I was half tempted by the offer of a burn on One in the Eye for Stickmen, 7a+, on their clips (see picture below)

but decided we’d be sensible and hit the road for the next 3 hours to Ullapool. A glorious evening’s drive, with the car thermometer showing 28C as we passed through Inverness at 8pm (what!) and we found a glorious parking spot overlooking # to watch the sun go down and enjoy a peaceful night.