We had a comfortable night on the ledge in The Black Dihedral, though the slight phosphorescence in the quartz intrusions conjured all sorts of interesting faces and features in the flickering torchlight. By morning it was just rock again, but the holds on El Nino were looking well chalked and tick-marked. Impressive territory to be free climbing!

Bill cruised the first pitch of the day

This is followed by the “the most exposed pitch in North America” and it has to be in the top 5 I’ve done on El Cap. Even more fun and somewhat more testing than the Salathe or Shield roofs, it heads out of the cave rightwards and downwards, then up an overhanging corner crack to take a implausible looking traverse back left along a quartz vein, to finish about 50ft above and 50ft OUT from where you started. Awesome!

Pitch 18 and 19 both turned out trickier than advertised (or we were suckered by the couple of easier pitches yesterday) – anyway, we both added to our airtime logs for the trip – Bill’s rock fridge surfing effort was probably the winner. No lasting damage, and we made it to the very commodious bivvy in the base of The Cyclops Eye – grand! 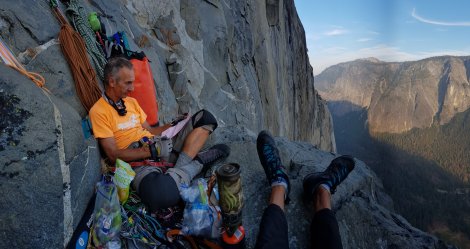 On track for The Igloo hopefully tomorrow night and topping out and back for pizza and beers on Wednesday. Fingers crossed…

One response to “A night in The Cyclops Eye!”