In the run up to Christmas you have to grab any chink in the weather to climb outside in the UK, or you might be waiting until March! Friday promised sunny intervals and 7C with a stiff breeze, after a few days of heavy rain – not the most promising combo but enough to tempt Jim into venturing forth.

I’d tentatively suggested “something around Stoney” expecting a few token bolted routes that I’d most likely done numerous times before. Arriving in Jim and Jane’s kitchen I was surprised to see Hard Rock open on the counter, at the Alcasan chapter. It’s a huge traverse of the Windy Buttress area of Stoney: half a dozen pitches of steady E2 in really atmospheric territory with its fair share of crumbly rock and rotting gear. Crucially, because it girdles the crag at around 2/3 height, it gets all the sun going between about 10am and 3pm. A genius idea, Jim!

I’d done the route a couple of times before, most recently as part of a “Peak Hard Rock routes in a day” trip with Andy https://doughton.files.wordpress.com/2016/09/running-like-a-climber-big-days-out.pdf – this would be a shorter but cooler day!

Certainly sunny enough, and only a few wet streaks down the major drainage lines. Game on!

We started on Windy Ledge, running Tiger Trott into Aurora – here’s Jim pulling over the bulge.

Jim then headed across Our Father and Scoop Wall to an airy belay on Windhover – fully appreciating why it gets the name. 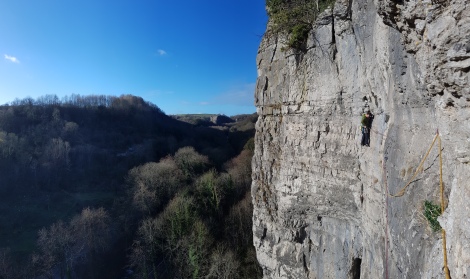 Things get a bit trickier as you turn the corner, with a couple of 5c pitches. First you head around beneath The Flakes, with a committing drop down into a juggy corner and then a thin traverse to a hanging belay.

Then the crux pitch which takes a down climb before an athletic swing around into Kellogg then an airy romp across the wall to finish up Inquisitor. Great lead by Jim, battling with by now frozen fingers. I was certainly thankful that I’d clipped myself a backrope as I plopped off the bottom moves, unable to find / feel the crucial layaway.

Grand voyage on any day of the year, but especially fine to bag Alcasan on the last day of November.