After three chilly days, normal “Sun Rock service” was finally resumed – just in time to avoid the worst of the mutiny! Big teams at Red Rock and Skiadianiko made the most of conditions to top up their tans and “ticks”, and Steve and James had a multi pitch adventure on Kokkinovrachos.

Jake and I went for a voyage to Mars for Jake to sample the incredible tufa jungle. The last time I’d visited the place had been absolutely mobbed (check out https://rockaroundtheworld.co.uk/2017/10/30/return-trip-to-mars/) but today we had the whole place to ourselves apart from a brief visit by a team of friendly Hungarians. Great conditions despite the continuous dripping of the tufas (there’s always another option)

Here’s Jake doing his “small child in a sweet shop” impression and trying to decide where to get stuck in! 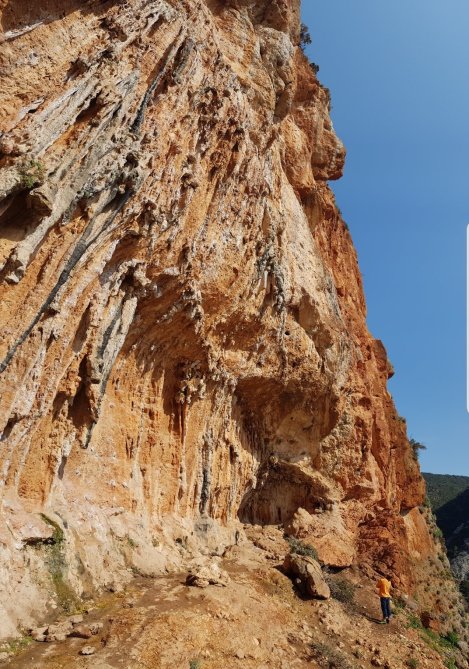 We warmed up on the excellent tufa-induction, Sinter Sinphonie, 6b – a good opportunity to rejoice in the no-hands-rest potential…

Then we upped the ante with Spaceman Spliff, 6c with a 7b extension. Jake cruised this

… but I ground to a halt halfway across the roof (looming above Jake in the photo below). A wrong choice of holds and a failed shuffle to find an imagined rest put paid to my attempt. 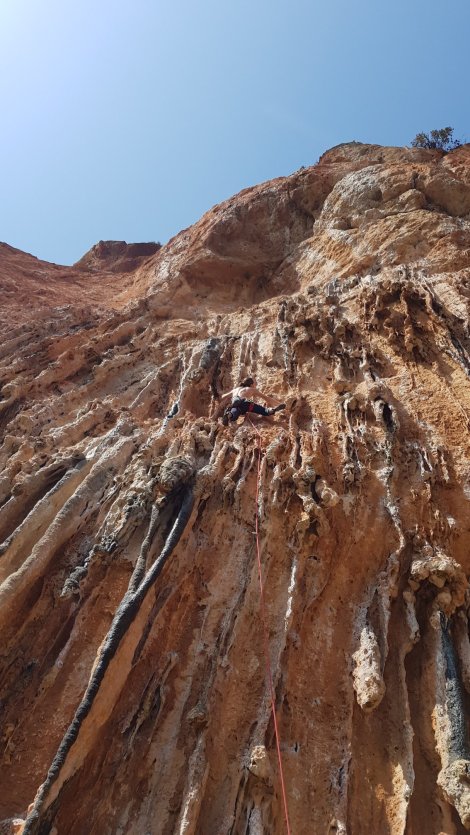 Next up Jake did Chuck Notis, 7a+ 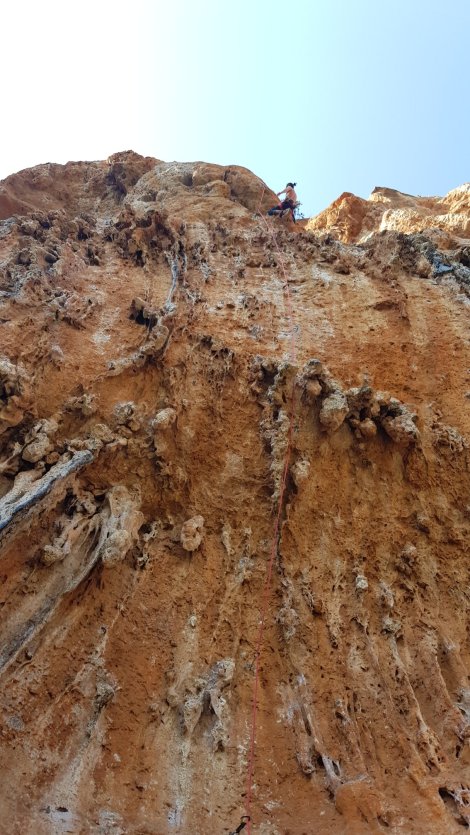 …which was another case of “close but no cigar” for me. I was beginning to think that the day was going to be a repeat of my last trips to Mars when I left with two 7a “projects” on my to do list. Happily, Jake (a.k.a. The human clip-stick and beta-guru) was also quite keen to do these, and I was able to get both routes off my “tax bill”. We both agreed that Boubaki Extension was one of the best routes we’d ever done – a 6c first half through the tufa jungle followed by a completely contrasting upper wall, gently overhanging, on a single tufa snake followed by a maze of pockets. Simply outstanding

Next off the tax bill was Yoko M-ono, 7a – very different style with a technical crux on thin tufa lumps low down followed by non-stop pocket action (but the eponymous mono can be avoided!)

That was plenty for me for the day, but Jake couldn’t resist a warm down on the very photogenic Tufa Liaison, back round the corner chasing the last of the rays on Sector Namaste.