With the departure of the keen team (a.k.a. Steve and James) we were left to our own devices and took the opportunity to escape the unrelenting steepness of South Pembroke limestone and head for a couple of days respite on “The Dark Side”. North Pembroke not only boasts Britain’s smallest city (St Davids, population 1,797 apparently) but also some fine and contrasting climbing on generally slabby sandstone. We based ourselves at the magnificently situated Treginnis Farm campsite, overlooking Ramsey Island…

… and within walking distance of Porth Clais, one of the main cragging spots.

We’d climbed here on a recent visit, so went an extra couple of hundred metres further along the coast to sample Porth-y-Ffynnon. You can just make out the two main crags in the photo below: just right of centre, the brown slab with the stepped corner running up it is Purple Slab (or Main Slab) and some way to its left, the grey slab tucked in a zawn is Grey Slab (see what they did there…?) 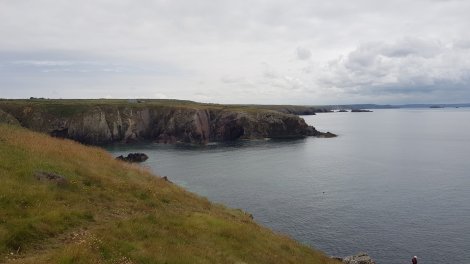 Here she is on Just Another Route, VS (that actually is the route name – it’s not that I can’t be arsed to look it up!) 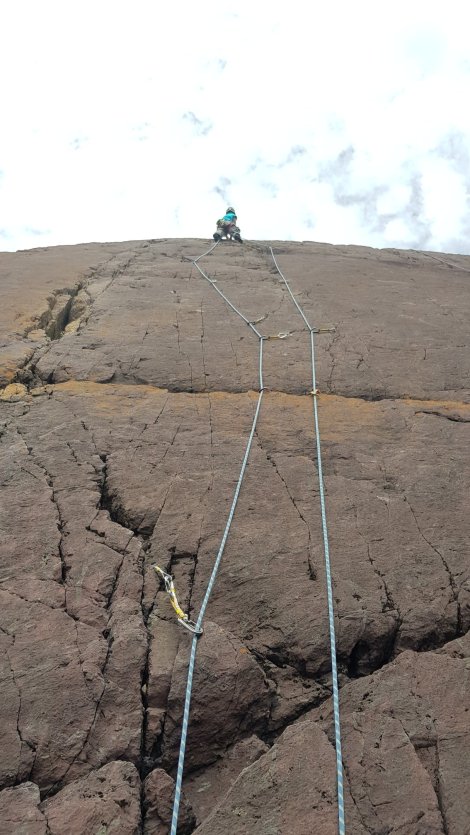 and on Slab Recess, Severe

We also did Saltheart Foam Follower, E1, perhaps the pick of the bunch, and not as “fluttery” as the Rockfax icon would have you believe.

Having more or less ticked the wall (and in the process seen kayakers, paddle boarders,

abseilers and coasteerers, but not a single other climber) we wandered over to Grey Slab. This has a more serious feel about it, perhaps due to the more enclosed setting and less frequented routes, and the rock in the top couple of meters comes with a MAJOR HEALTH WARNING – it’s really shattered and it’s very difficult to ab past it or top out through it without dislodging a fusilade of shrapnel on anyone below. Hint: tie a figure of eight in the ab rope just below the top and you can lower off between routes so reducing the risk. 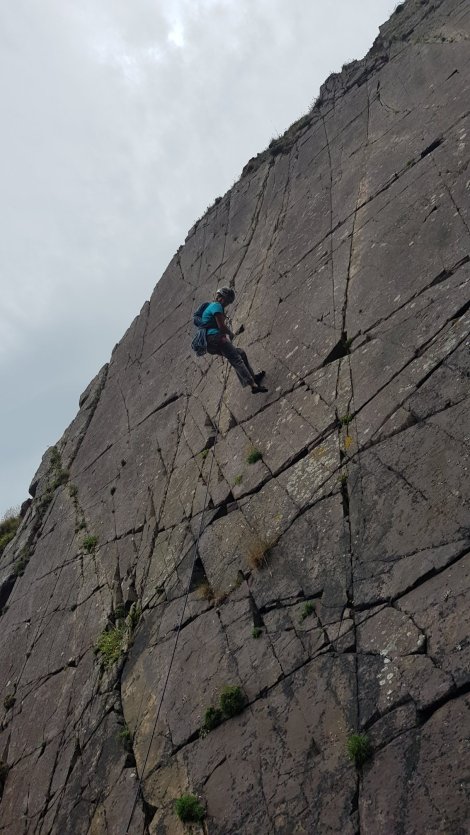 It’s a shame, as the two routes are both very enjoyable: Aquaplane, E1 (and much more representative of the grade) and Purple People Eater, HVS. With the stone-fall risk I’m hesitant to recommend them though. Make your own mind up!