The Precipice is probably the best bit of rock in the park;

a 200ft high crag of immaculate pink granite, with great views over The Atlantic. Not to be confused with the nearby Precipice Trail which is a path up the adjacent hillside (see below) with some via ferata rungs and handholds (looked fun but busy). The crag is situated around to the left of the pic.

The must-do classic looked to be Chitlin’s Corner, a 4* 5.10a. Its classic status mostly derives from its first 120ft 5.7 pitch which takes an immaculate square-cut corner – you can just about make me out nearing the stance in the photo below, with the P2 roof looming above.

Here’s Helen following the pitch, which is quite sustained at the grade, but very well protected.

The less-travelled second pitch is also great fun, with the thin continuation corner crack proving testing and the traverse out right beneath the roof giving great exposure!

A couple of the other classics were beset with top-ropers, so we headed further left to do Sea Gypsy, also 5.10a. This starts via a thrutchy 5.8 off-width to a 2-bolt belay (and there’s maybe a better start, because the rest of the route seemed cleaner). We ran this into the 5.8R second pitch which involves thin slabby moves to a bolt at 15ft and then more run-out climbing right then left up slabby ramps. Mildly harrowing to another bolted stance. Here’s Helen finishing up the final ramp. 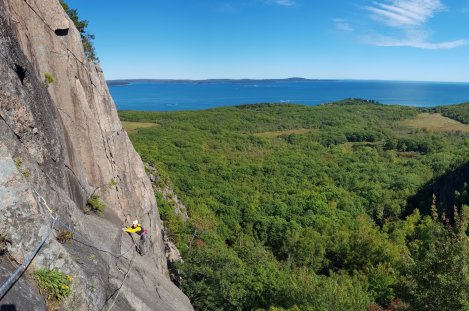 The top 5.10a pitch is in complete contrast: well-protected steep climbing through a couple of roofs on positive holds – one of the best pitches of the trip so far. Here’s Helen having just pulled over the second roof.

That was followed by an early finish as the crag looses the sun around 3pm and it was absolutely perishing in the shade!