The majority of the climbing in New Brunswick lies in the south west, between Saint John and Fredericton, most concentrated around Welsford. The only hassle is that most of the crags are situated on land controlled by the Gagetown Military Base, for which you need a permit. It all sounds a bit epic, but actually it’s very straightforward and quite speedy: You just turn up at the Petersville Camp gatehouse (it’s just off junction 51 on highway 7, about 7km north of the climbing); tell the nice chap at the gate that you’d like a permit to climb; and 2 minutes later you walk out with some bits of paper.

It was a crisp autumn day, sunny but chilly, so the appealingly named Sunnyside sounded like a good bet. The parking is easily located from Mountain Project then a 20mins gently up hill walk (following low-key red tape – much like the permit process)…

… brings you to the crag, with a couple of other teams already in situ. 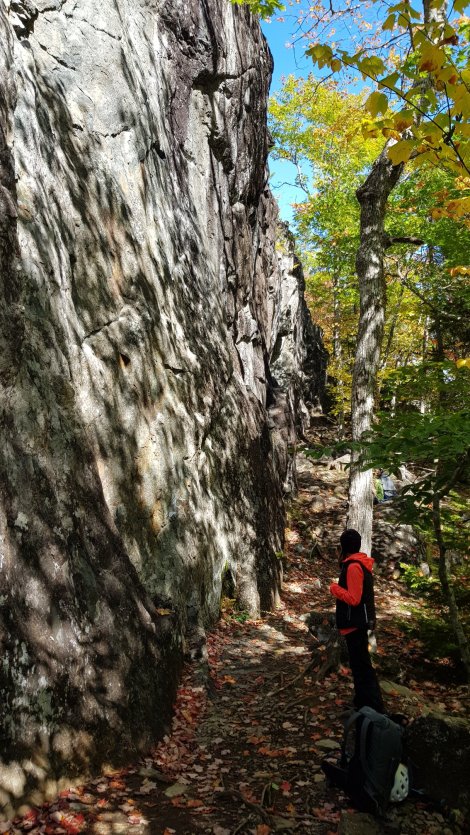 It’s a bolted granite wall of about 60 to 100ft with a good spread of grades.We warmed up on Dying Embers, 5.10a (steep fun)

and I did Celestial Motion, 10c; Quantum Theory, 10b (perhaps the best we did); and Combat Geologique, 11b. I got close, but no cigar, on Dihelio, 5.11d, which takes perhaps the most striking line on the crag up a leaning corner / dihedral

Meanwhile, Helen led Snakes and Arrows, Superstar and Pollux (the latter being a classic). 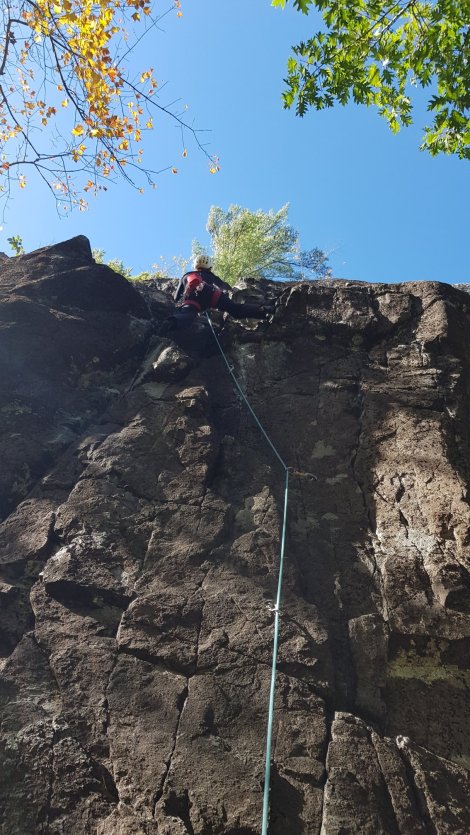 The crag stops being “Sunnyside” around 4ish and once in the shade it got distinctly cool very quickly, so we called it a day – and a very pleasant one too. Not forgetting to ring the nice man at the gatehouse to tell him you are clear of the firing zone!Another fine day followed, so we set off (via the guardhouse) to explore the main climbing area of Cochrane Lane. This array of granite walls are dotted around the hillside, decked-out in magnificent fall colours.

There’s a well worn path leading up to the numerous sectors, with a helpful topo

… and signs at the major junctions. We’d been recommended Minkey Wall

as being the centrepiece of the area, and we weren’t disappointed. 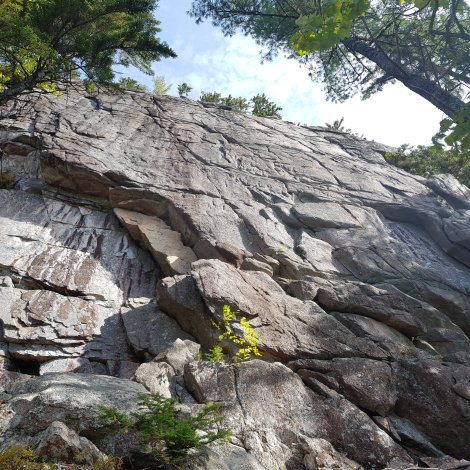 The ethic here is very much trad, fitting the strong natural lines that criss-cross the walls (with the occasional bolt at the blank bits). We started out with “5.8 for Style”, given **** and 5.8+, which takes an appealing crack line towards the right of the sector (where it becomes King Arthur’s) 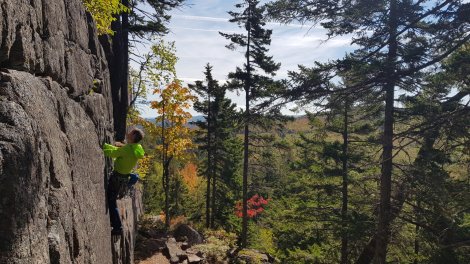 All very steady until the crack closes to thin fingers and then disappears leaving an insecure layback into a pod – maybe 5.8+++!

Next we did A Warm and Sultry Evening, 5.9 and “perhaps the best 9 at Cochrane”, taking the rightwards ramp into the sweeping, left-slanting crack towards the right of the photo below. 100ft of fun juggy crack which would rival the best HVSs on Stanage (and be twice as long!) 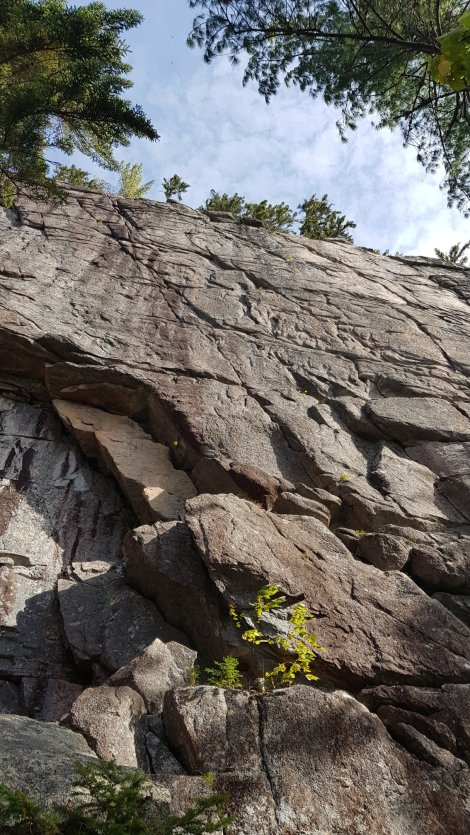 Outstanding – well worth its 4* and a candidate for route-of-the-trip so far. We also did The Smoking Crack, 5.8+, and Salt ‘n’ Pepper, 5.7+, which Helen rated as good as anything we’d done in The Gunks (but with the caveat “if you like that sort of thing”). Great outlook 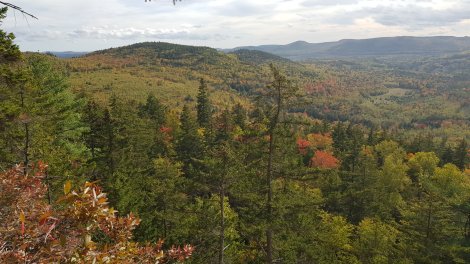 … and lots of pretty leaves 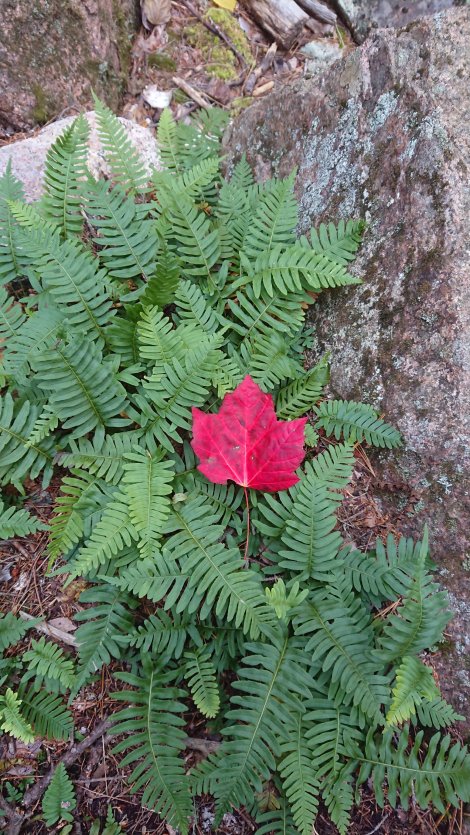 Logistics note: The only major downside to climbing around Welsford (having established that the permit thing is pretty straightforward) is the lack of campground options, especially with it being near (or perhaps beyond) the end of the season. We ended up commuting to Mactaquac Provincial Park, almost an hour to the north, for the nearest place that was open. The upside of this being that it’s a really lovely spot by a lake / reservoir, especially with a roaring campfire. 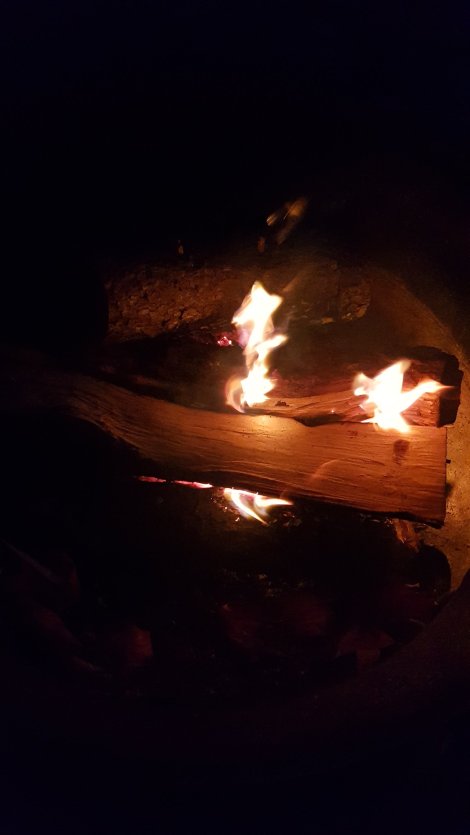 … and some magical will-o-the-wisp mist effects on the water as we left the next day.