We’ve based ourselves at the lovely Almócita campsite, in the foothills of the Alpujarra. After stumbling into the path of the giant white motorhome migration, when passing Granada, it’s a haven of tranquility – we’ve got it pretty much to ourselves.

We’re here for its proximity to Cacín (which you can see from our van, even though it’s a tortuous 20mins drive away)

… but decided to check out other local options too. Helen, with the help of Donde Escalar, came up with La Genara, also 20mins down the road (half of which is getting out of the campsite!) – only 2 karabiners (out of 6) which I usually turn my nose up at, but Helen had a good feeling about it and was proved absolutely right. If it was on the Costa Blanca it’d be rammed!

The approach described in Donde Escalar suggests parking at the Area Recreativo and walking up, but credit to UKC which suggested a much lazier option:

From Laujar de Andarax head for the ‘Villa turistica Laujar de Andarax’ Hotel, drive past it following a dirt road. At the crossroad turn left and after aprox. 200 meters you will find the parking with the crag in front of it. Should be OK in 2wd though 4×4 was comforting. From the parking there’s a stupendously well-cairned path for 300m to the crag – you couldn’t miss it, but here’s a Wikiloc which will help you find the start point.

40 routes up to around 20m and almost all 6a to 7a. There’s a topo without grades on the otherwise excellent Toskajara website http://toskajara.com/escalada_zonas.php

… but again UKC wins with a list of routes and grades which mostly matches the names on the rock.

Facing due south, it’s a perfect winter’s day suntrap – ideal, you’d have thought, for mid-February, but it was an over-bearing oven with it being 20C in the shade (at just over a thousand metres). Okay, I’m not expecting any sympathy 😉

To our surprise, we were joined by a family with a teenage rope-gun (not as surprised as they were to find a couple of Brits on their local crag!) Here’s the youth getting a rope up one of the routes in the centre of the crag.

We did a couple of 6as on the left hand side, Diedro de la Genara (ok) and Noe (better) and then moved further right for the obvious “line of the crag” Diedro Madrileno, 6a+ and an absolute belter. 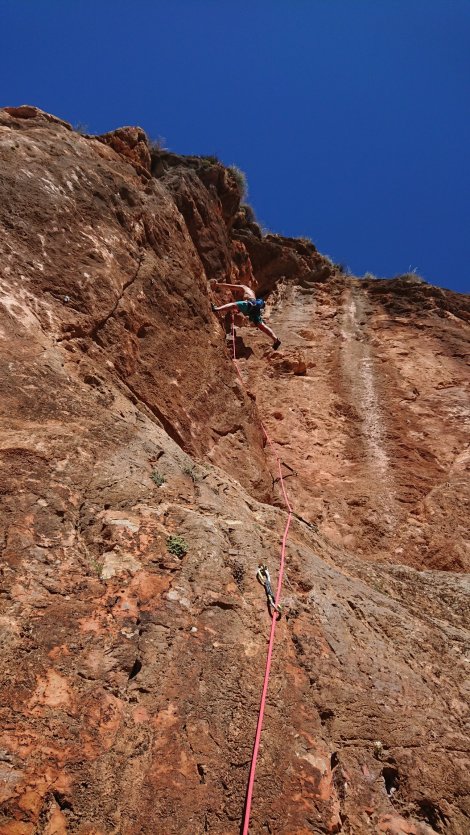 I top-roped the route on the right, Te Dije Que No, 7a, but it was a bit too scrattly in places to want to lead it (though much cleaner than the route up the cracked wall to the left, which was pretty filthy and which I did sketch my way up!)

We finished up with a couple of routes at the far right of the crag. Joel was a fun V: 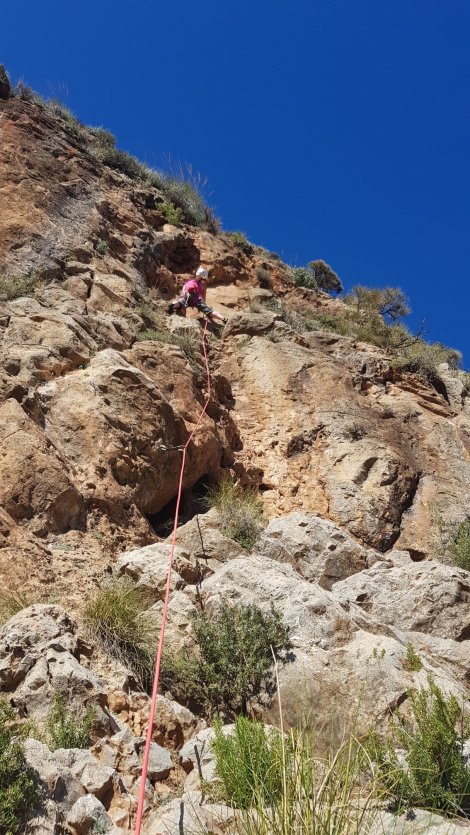 … and El Albero, 6a+, an outstanding voyage up the slanting runnel (the 4th route from the right – they’re out of order on UKC)