Tierra de Nadie is a recently developed crag between Montessa and Vallada (hence “No Man’s Land”). It is clearly visible from the A 35 and from the well-established climbing area of Montessa, 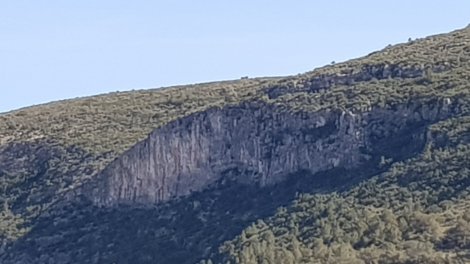 … so quite how it remained undiscovered for so long is hard to fathom. Anyway, it’s certainly “on the map” now, judging by the group of (mostly Brit) vans squeezed into the limited parking area in the orange groves (is that a Van-clave or maybe a Van-campment?) 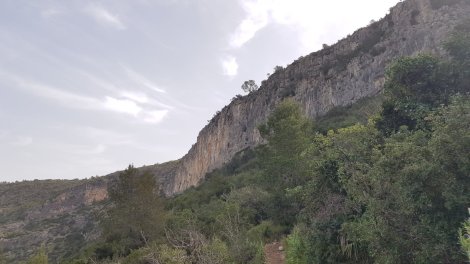 About 50 routes, typically 30-40m on gently overhanging rock, almost all between 6b and 7b, with some stunning tufas and towering pockety walls to entice you – it really is a major addition to the area. A possible drawback for our usual schedule is that it’s north facing (must be a godsend in summer) but with a forecast of 20C it was pretty comfortable at the end of February.

If all that praise seems a bit gushing, you can probably guess that Helen and I both had a good day. I managed a couple of 7as: L’Amo del Bancal and Enigma; both outstanding but remarkably contrasting for adjacent routes – the former techy edges and pockets,

and the latter big moves yarding between huge jugs. I also ticked a 7a+, SuperGlue, which was very pleasing though the route wasn’t quite as good.

Helen managed her first 6b onsight of the trip with the excellent La Revuelta, so we’re gradually getting back on form.

The sun was setting (but not quite yet round onto the crag) by the time we left – pretty jiggered after a bunch of l-ooo-ng routes. Time for beers back at the Ermite at Vallada.