That got your attention! But rest assured that RockAroundTheWorld hasn’t morphed into a sleaze site; the title accurately reflects the highlights of the first couple of days of another visit to Pembroke…

An early start and world-record pace saw Martin and me pulling into the St Govans carpark around 12:30, and for once there were no birds or bombs to constrain the agenda. That just left the sea… Paul and the boys had raved about the great climbing and magnificent rock architecture in Hollow Caves Bay so we went for a shufty. 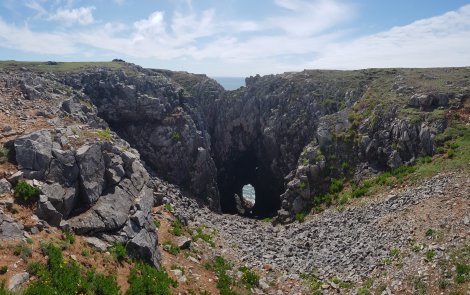 Access is from the inside of the cliff, via abseil down the Great Central Cave, and though calm seas and a low tide are advised, we figured we had just enough of a window with it being less than two hours after low tide.

The “short jump” across to the free-standing pillar would have challenged Mike Powell (current long jump record holder – thanks Wikipedia!) and whilst we pontificated a huge wave crashed in and soaked Martin – decision made and time for some prussik practice.

Undeterred we figured out a more conventional rap down the massively overhanging seaward face, and with a bit of jiggery-pokery managed to get established on a hanging stance a few metres above the incoming sea.

I ventured off under the sloping roof and around an arete, on what I hoped was the 3* combo of Galactic Glory E1/2. After a committing pull over the initial roof the climbing eased until I was faced with a hard sequence out of a hanging corner onto a featureless slab a few metres from the top – not the “juggy wall” described in the topo. Realising I was off route, I reversed, removing gear as I went. No real hassle…

I don’t really know what happened next (maybe a snapped hold?) but from a position of relative comfort I suddenly found myself plummeting, dimly aware of wires popping out left, right and centre. When I finally stopped I was upside down and somewhat alarmed to find myself about 3m above the sea!

Martin, meanwhile, was obliviously still belaying out of sight around the corner – I’m not sure who was more surprised when I’d righted myself, pulled back onto the rock and stuck my head around the corner level with his belay! After confirming no major injuries, and in the spirit of “getting back in the saddle” I set off again, taking care to follow the description more carefully and head out right to the arete and pulling round to the “juggy wall” as promised. Exhilarating, exposed climbing. Here’s Martin following the pitch, a few metres below my launch-point (roughly where the yellow rope is appearing over the roof)

Back on top of the crag (our intended meeting place!)

… we reckoned I’d fallen about 20m – happily through very steep territory. I have no idea how I inverted, and the only clue is that the only scrapes I accumulated were on the back of my calves – go figure and answers on a postcard! School book physics will tell you that it takes 2 seconds to fall 20m (one elephant, two elephants…) and you’re doing 40mph by the time you stop. Certainly the longest fall I’ve ever had, and not one I hope to repeat any time soon!

We decided to down-shift for the reminder of the afternoon and chill out on the very pleasant Crickmail Point. Regular readers will know that Helen and I had been stymied from visiting by a newly introduced bird-ban a couple of weeks previously. No such problem on 1st August.

Fabulous views back along the coast past Triple Overhang Buttress and The Castle. 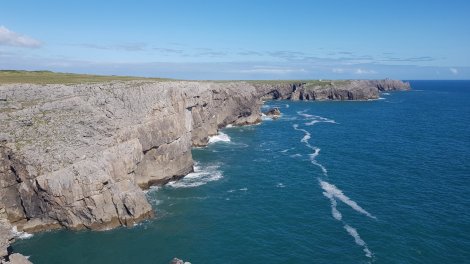 A stress-free ab to a non-tidal ledge 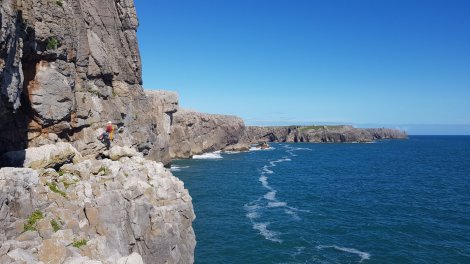 and the outstanding crozzly cracks of B-Team Buttress, E1, 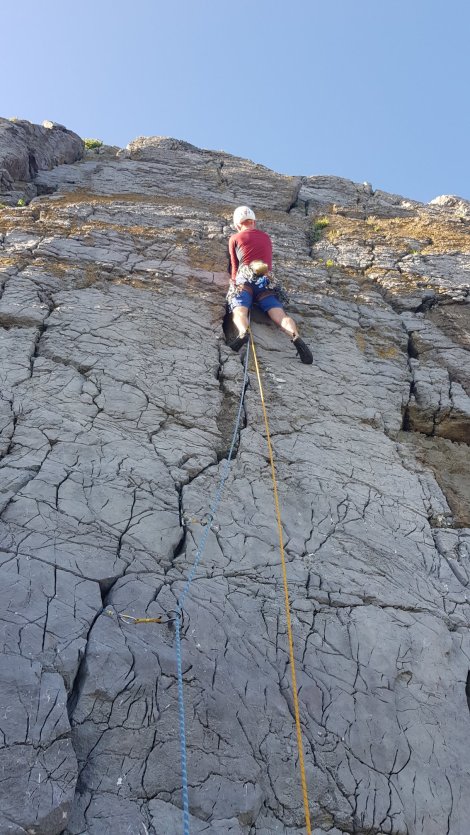 Glorious morning on the Bosherston campsite, with the weekend crew starting to thin out (not that it was ever that crowded).

We thought that a non-tidal audit of my mojo might be advisable and chose the superb horizontal adventure of Pigs on the Wing, 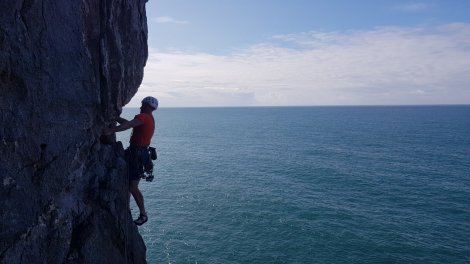 These also allow a view down the main objective for the day: Deep Throat. This two-pitch E3 takes the huge overhanging chimney / crack system that cleaves Triple Overhang Buttress and features as one of the top 100 Limestone routes in the country according to Chris Craggs’ eponymous coffee-table book. As an irrepressible “ticker” this had been on my to-do list pretty much since my first visit to Pembroke almost 30 years ago, indeed it is one of the few outstanding climbs remaining from a list on a post-it in the back of my copy of the red 1985 Jon de Montjoye guidebook.

No bird-ban, no range closure, low tide – if not now, when?

You can rap directly down the route with a bit of care – either getting a good swing going, or placing gear on the way down, to avoid ending up in the sea. 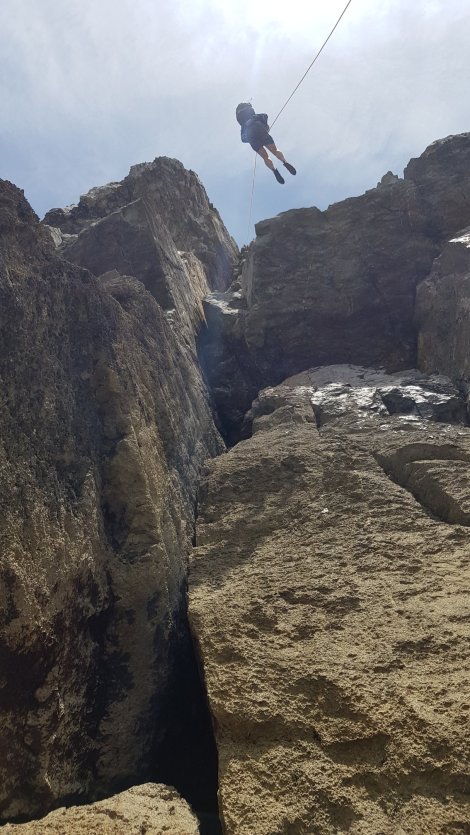 The view back up is quite imposing…

The first pitch is the crux, with difficulties concentrated in the last few metres as the chimney widens and overhangs and a wild, committing swing rightwards is needed to reach a sloping ledge. Beta spoiler alert – there’s a spiky hold on the arete on the left.

… and pressing on through the still very steep terrain on the second pitch (the group on the left are a family team on the stance of Pigs on the Wing.)

With Deep Throat in the bag, we headed over to Huntsman’s Leap, to try to get on The Beast from the Undergrowth before the tide came in. 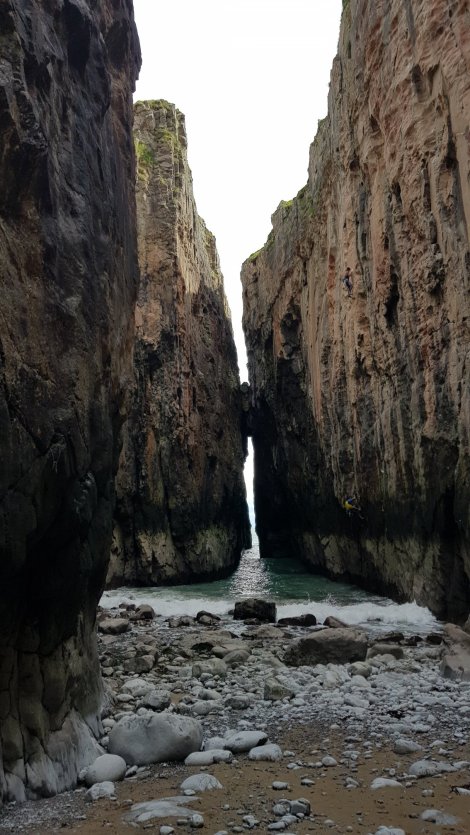 Martin made short work of the crux (what L-OOO-NG reach?) 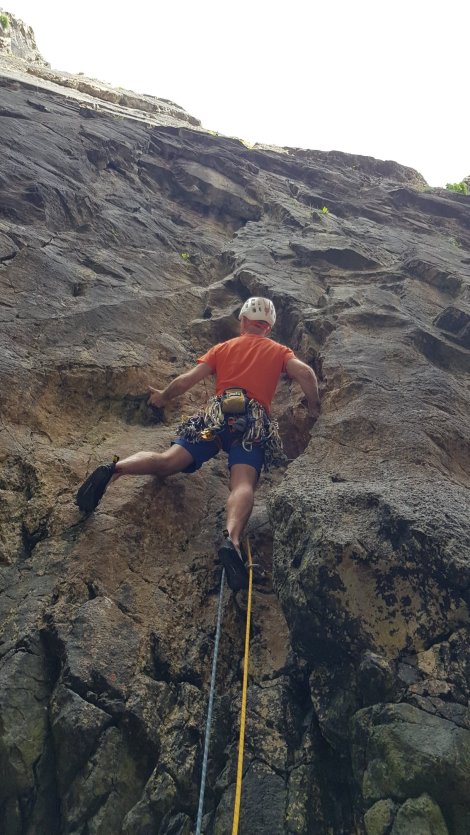 … and a sprint finish for the top meant that I still had some protruding stepping stones for my carefully timed dash to the starting holds between waves. Phew!

More than enough climbing for a great day, but with an hour or so before beer o’clock we couldn’t resist one more route. Back out along the range to Rusty Walls where we bumped into James and Hamish by chance. Here’s James leading Solidarity, E1, with Martin just visible below following Corrosion, E2, with Hamish on the belay ledge. 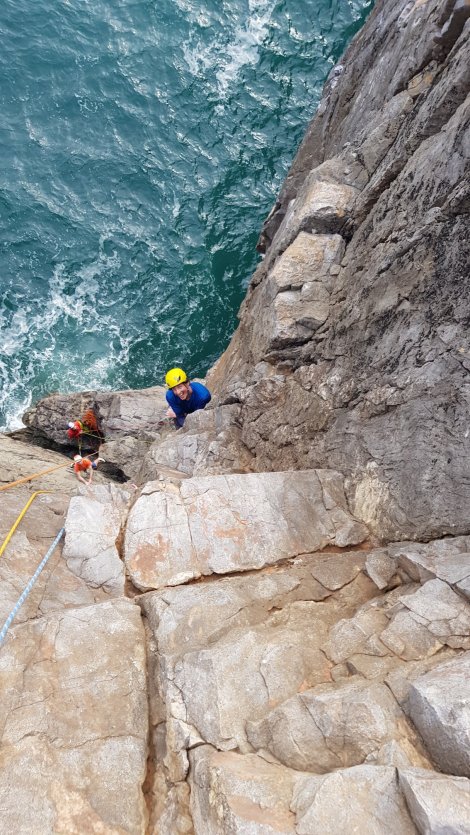 Amazing full moon, with Saturn and Jupiter visible behind it – great end to the day. 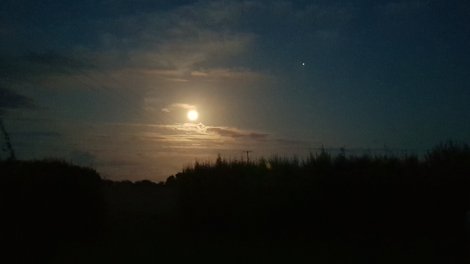 One response to “Deep Throat and a Monster Whipper”