There’s really no excuse for visiting Pembroke in August and going to a crag that isn’t bird banned the rest of the year. Stackpole Head is one of the major attractions in this climbing wonderland, and I’d only ever been once before. On that occasion, about 20 years ago, Paul and I had done Silver Shadow “one of the best E2s in Pembroke”. Fitting, therefore, that he managed to take a break from the family holiday to join me and Martin for another visit.

Stackpole Head is a fabulous piece of rock architecture, the seaward end pierced by an impressive archway which is crossed to access the tip of the headland for stunning views towards Broadhaven beach and Range East. It also gives a great view of the hidden South Face and our chosen warm-up: Stackpole Cracks, E1. This takes the obvious left-leaning cracks which are the main line of weakness on the face, in a couple of pitches. Well worth seeking out – it’d be 3* anywhere else. Also, don’t be put off by the E1 5a grade, which generally implies poor gear – there are bomber placements throughout, but it’s certainly worth E1! 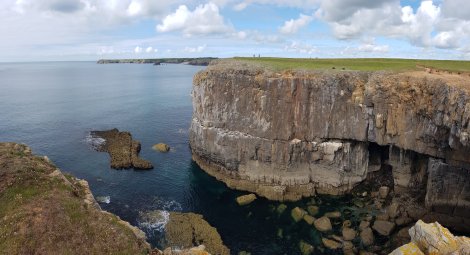 Amazing views through the arches. 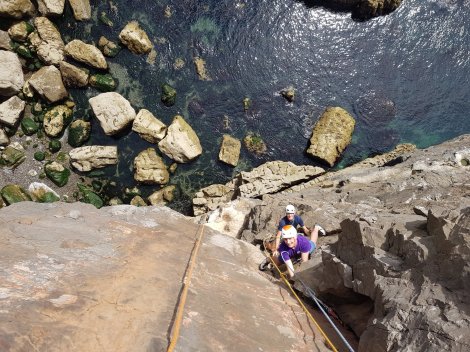 Nicely warmed up, and with the tide just about to turn, we rap into the Central Sector for the main event.

Swordfish featured in the UKCs “Five Best E3s in the UK” https://www.ukclimbing.com/articles/features/the_five_best_e3_routes_in_the_uk-8536 which is quite a shout. I didn’t remember much about our previous visit, other than what an imposing and intimidating place it was when viewed from below – nothing much has changed in the intervening decades.

Swordfish takes a steep, damp but juggy groove through a couple of small roofs until it hits a bigger roof at around half height, forcing a tack leftwards. There are decent holds in the break, but not much for the feet, and the exposure beneath them seems to ratchet up the gravity. It wouldn’t be a great place for leader or second to pop off.

A determined approach brings you to a glorious position on the arete, basking in the sun as you escape the shadow and dankness of the overhang. The character of the route morphs completely and you are now faced with a short, technical groove before reaching a more defined corner with a welcoming lay back flake in the back of it, allowing you to power up the last 15m like a conquering hero.

What a route – there’s SO much quality climbing and the position is pretty hard to beat.

The base of Stackpole was submerged by now, but one route there is pretty much a day’s worth. As a warm-down we headed over to the east face of Mowing Word and Hidden Wall, where Paul’s lead of Street Legal, E2 5c, rounded off another outstanding day of Pembroke fun.