One of the recent crags we found out about  (thanks Ted! ) is near the village of  Atzuvia, just beyond Pego. A bit of Internet trawling to supplement the camera photo of an iPhone screen shot and we’d found a topo – all be it with pretty vague directions. With Chris and Justin added to the team, we set off on a somewhat grey day for a  voyage of discovery. ..

Heading up the Vall de Galinera we passed numerous potential crag candidates, without spotting the promised ‘parking area down a road on the right’. Retracing our route we managed to make some rock on the hillside match with the low res topo, and the glint of bolts in the sunlight convinced us to hack up the hillside.

It was well worth the effort – only a dozen or so routes, recently developed and little travelled, on sharp but occasionally fragile rock. Great bolting. 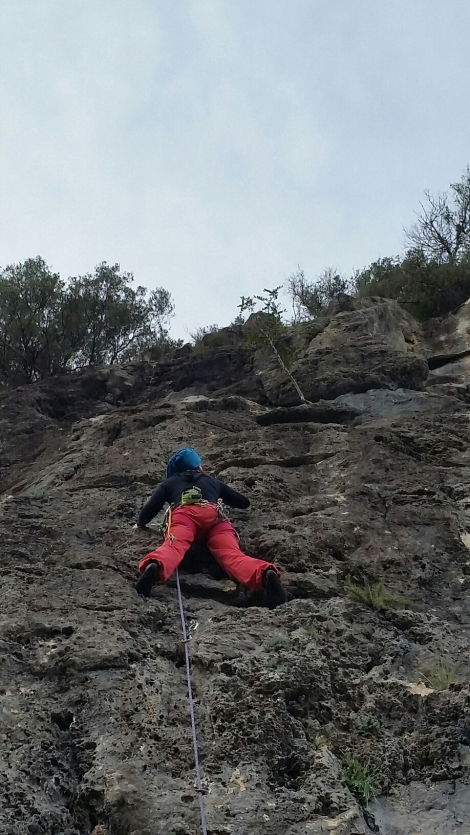 We warmed up on a bunch of 5+/6as on the left then had a tussle with a 6c with a very stiff, reachy pull. That only left a 7a+ up a tufa or a 7b ‘project’ up a steep wall. I tossed a mental coin and was pleasantly surprised to find myself topping out on the tufa route without really breaking sweat. Somewhat over graded 🙂 That encouraged an attempt at the 7b which was more taxing but equally successful – way beyond my expectations for Day 1 proper of the trip. Helen led a first route since her injury, with no ill effects, so a good day all round.

Meanwhile Justin and Chris had found Ted’s recommended ‘Top 10’ 50m 6b over on the right of the crag – one to come back for.