With a tremendous act of self control, I had a proper rest day yesterday, in glorious weather; just chilling at the campsite 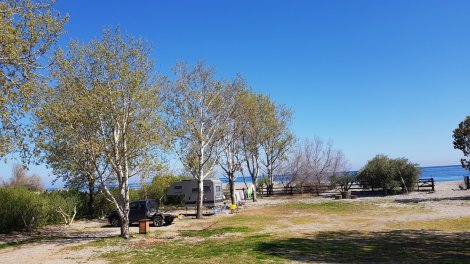 That’s pretty much a first for me – my main energy expenditure was on a quick cryptic crossword (only my second one ever – could be quite addictive though!) 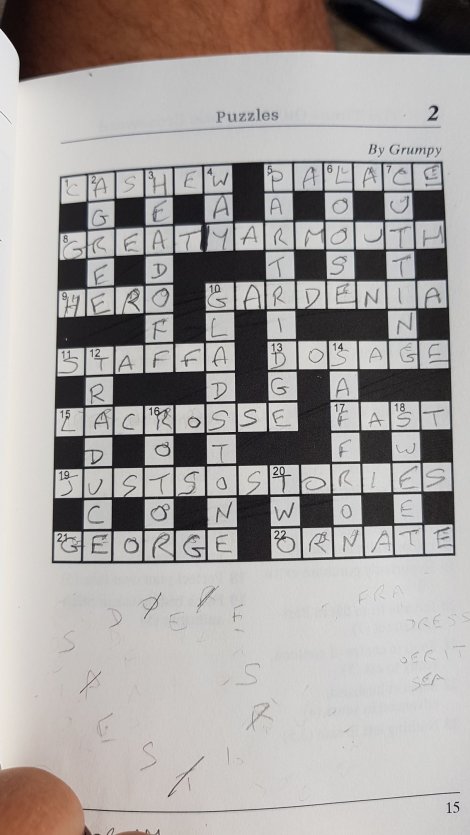 Anyway, thus refreshed, we decided on a day trip over the hill towards Kyparissi to climb at Kapsala. You wind up through Poulithra to reach the high mountain hamlet of Pirgoudi, with magnificent views down to the coast and over towards the Argolis peninsula 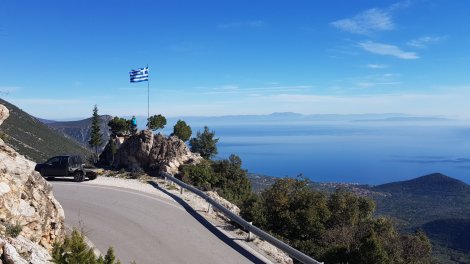 You then idle through an expanse of high hinterland before dropping down to the coast again at Fokiano, via more zigzagging – you’ve driven around 30km and it’s taken 50mins, but you are just 10km away from the campsite as the crow (or seagull) flies. From here on, the pace picks up a bit as you hit the brand new coast road (an extraordinary folly / vanity project / “investment” linking two charming bits of nowhere) and you travel as far again in 10mins to reach the parking for Kapsala (another 10mins or so and you are in Kyparissi) Travel hint: the new road doesn’t yet feature on Google Maps so if you want guidance for this shortcut you are best to navigate to Fokiano then follow your nose along the gleaming asphalt (and amaze the nice folks at Google).

Climbers are the big winners from the scheme (perhaps there’s a covert activist on the local planning committee!) as it knocks about half an hour off the drive from Leonidio to Kyparissi, and makes the imposing cliff of Kapsala accessible for the first time (visible as you round a final bend, plunging down from the road almost into the sea).

The parking space is a bit of a barren spot, and we hadn’t seen a single vehicle, but immediately after we arrive we’re joined by Slovenian and French teams, and shortly after by a couple of Brits.

Following the usual cairns and paint blobs you drop down from the parking and are soon immersed in the coolth of the NE facing crag, and the full scale of the wall is revealed. 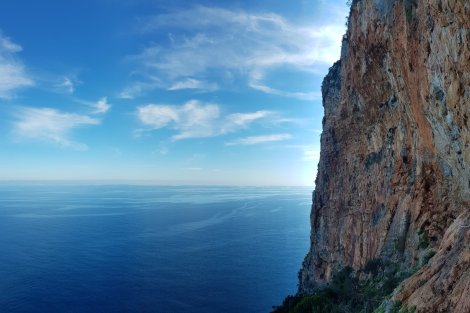 There’s a 120m 5-pitch adventure up the far skyline, but otherwise the remaining couple of dozen routes are all single pitch, ranging from 5c to 7b+. The first bunch of four 6a/b routes you encounter are on white, flakey, angular rock. Enjoyable enough, but probably not worth the journey on their own. Here’s Helen on Lukumades, 6a+

The main attraction lies just around the corner – an overhanging wall of orange tufa and pockets with about 10 routes in the 7a-7b+ range, three of which get the 🎶 treatment in the Aris guide. Here’s a Slovenian lad (foreground) on Nobel Bolt, 7a+ and Jon (belayed by Gaynor) on Born to Lose, 7a

… Or Born Too Loose?… Anyway, it’s a belter, with juggy climbing (apart from a tricky move about 10m up) to a bouldery finish in a groove with a couple of smeggy fingerlocks.

Here are a couple of shots taken by Gaynor (thanks – pleased I wore my photogenic yellow T-shirt!)

Piecing together the first finger crux

… Making the most of a no-hands rest while our Slovenian friend ponders the crux of Bolton Celtics:

Juggy territory before the sting in the tail

Here’s Jon again moving through what I thought was the crux on Nobel Bolt, where juggy tufa and huge pockets give way to a very fun, technical groove, via a thin crimpy couple of moves passing the lower off on the adjacent 6c+. Comfortably in the top 10 routes of the trip! 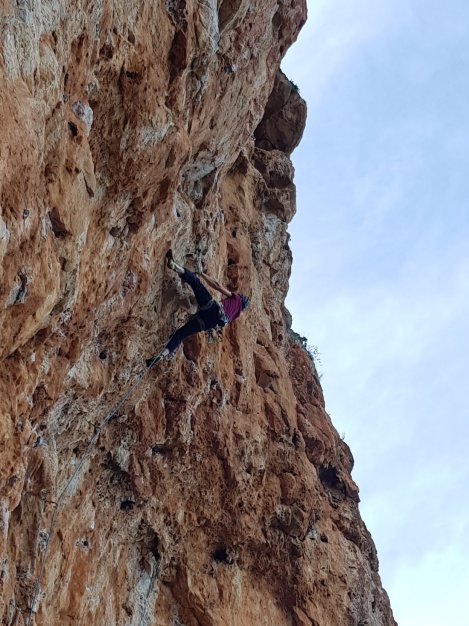 I also did Bolton Celtics, 7a (fascinated to know the origin of the name) significantly easier than the other two, but not as good.

Great to bump into Jon and Gaynor, also on a grand tour of South East Europe and also blogging as they go. Check out http://www.ordinaryclimbers.com

For the perfect end to a great day, Helen and I spotted a pod of dolphins swimming past as I was lowering off Nobel Bolt – you don’t get that in Chee Dale!

I’ll have to come back for the other 🎶 route, Live to Win, 7a+, which also looks awesome